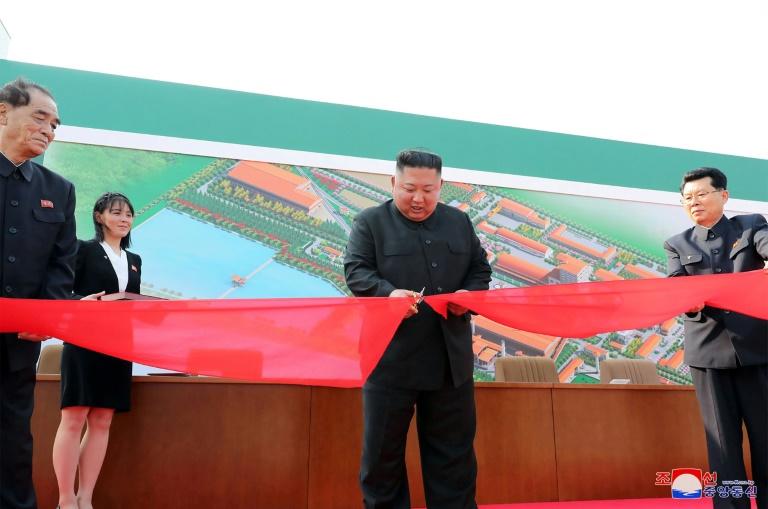 State television showed Kim walking, smiling broadly and smoking a cigarette at what the North said was the opening of a fertiliser factory on Friday in Sunchon, north of Pyongyang.

Rumours about Kim’s health have been swirling since his conspicuous no-show at April 15 celebrations for the birthday of his grandfather, the North’s founder — the most important day in the country’s political calendar.

His absence triggered a series of fevered rumours and unconfirmed reports over his condition, while the United States and South Korea insisted they had no information to believe any of the conjecture was true.

Kim’s sudden death would have left Pyongyang facing an unplanned succession for the first time in its history and raised unanswered questions over who would succeed him and take over the North’s nuclear arsenal.

China, the North’s key diplomatic ally and main provider of trade and aid, is keen to maintain stability in its neighbour and avoid the possibility of an influx of refugees.

North Korea is “at the epicentre of an extremely tense security crisis”, involving “a nuclear standoff where tens of millions of lives are at stake,” Henri Feron, Senior Fellow at the US Center for International Policy, told AFP.

“This raises legitimate concerns about the domestic and international instability that his death could cause.”

Footage showed Kim in his trademark black suit, waving to hundreds of workers who cheered his appearance and released balloons.

He was flanked by senior officials — including his sister and close adviser Kim Yo Jong — and showed no outward signs of ill health.

At one point Kim sat in front of a sign that described the event as a factory opening ceremony for May 1, 2020, but his appearance could not be independently verified.

As with previous public appearances during the global coronavirus pandemic, Kim and his entourage were not wearing masks, unlike the crowd of workers at the ceremony.

Analysts said Kim could not appear in public wearing a mask as it would make him appear vulnerable to the North Korean people.

The North has insisted that it has not seen a single case of coronavirus, although experts say that is unlikely.

Kim’s repeated appearances without a mask had led some to speculate that he may have caught the virus.

Reporting from inside the isolated North is notoriously difficult, especially on matters relating to its highly secretive leadership.

The North Korean leader had not made a public appearance since presiding over a Workers’ Party politburo meeting on April 11, and the following day state media reported that he had inspected fighter jets.

Citing an unidentified source inside the country, it said Kim — who is in his mid-30s — had needed urgent treatment due to heavy smoking, obesity and fatigue.

CNN then reported that Washington was “monitoring intelligence” that Kim was in “grave danger” after undergoing surgery, quoting an anonymous US official.

Officials in Seoul had consistently downplayed the reports and a presidential security advisor said that Kim was “alive and well” and staying in the eastern resort town of Wonsan.

US President Donald Trump suggested earlier this week that Washington believed Kim to be alive and declined to immediately comment on Kim’s apparent re-emergence.

Trump and Kim have met three times, although talks on the North’s nuclear capabilities have long been stalled with no sign of them resuming.

Analysts say Kim is likely to make another public appearance in the coming days that will be reported by state media.

But Pyongyang “probably won’t explain Kim’s recent absence given the secrecy around the leader’s health and schedule,” said Leif-Eric Easley, a professor of international studies at Ewha University in Seoul.

Previous absences from the public eye on Kim’s part have also prompted speculation about his health.

Kim’s father and predecessor had been dead for two days before anyone outside the innermost circles of North Korean leadership was aware.

In 2014, Kim Jong Un dropped out of sight for nearly six weeks before reappearing with a cane. Days later, the South’s spy agency said he had undergone surgery to remove a cyst from his ankle.