The Times of Earth, International Edition
0
835 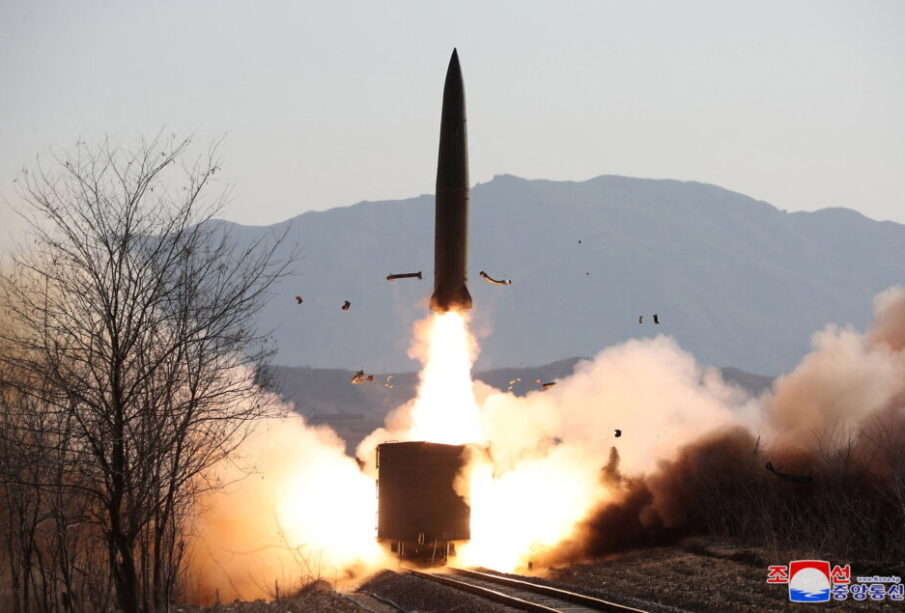 A railway-born missile is launched during firing drills according to state media, at an undisclosed location in North Korea, in this photo released January 14, 2022 by North Korea's Korean Central News Agency (KCNA). KCNA via REUTERS

Japan also reported the launch, with chief cabinet secretary Hirokazu Matsuno condemning it as a threat to peace and security.

In less than two weeks, nuclear-armed North Korea has conducted three other missile tests, an unusually rapid series of launches. It said two of them involved single “hypersonic missiles” capable of high speed and manoeuvring after launch, while a test on Friday involved a pair of short-range ballistic missiles fired from train cars.

Japanese Defence Minister Nobuo Kishi said the missiles appeared to have landed in the ocean near North Korea’s east coast.

“It is self-evident that the aim of North Korea’s frequent missile launches is to improve their missile technology,” he told reporters.

“The repeated launching of North Korea’s ballistic missiles is a grave problem for the international community, including Japan,” Kishi added, noting that the launches were a violation of U.N. Security Council resolutions that ban North Korea from all ballistic missile development.

The U.S. military’s Indo-Pacific Command said that the launch did not pose an immediate threat to the United States or its allies, but that “these missile launches highlight the destabilising impact of (North Korea’s ) illicit weapons programme”.

The pace of testing and the different launch sites suggests that North Korea has enough missiles to feel comfortable expending them on tests, training, and demonstrations, and helps reinforce its deterrent credibility by emphasizing the volume of its missile force, said Mason Richey, a professor at Hankuk University of Foreign Studies in Seoul.

North Korea has not tested its longest-range intercontinental ballistic missiles (ICBMs) or nuclear weapons since 2017, but after denuclearisation talks stalled in 2019, it began unveiling and testing a range of new SRBM designs.

Many of the latest SRBMs, including the hypersonic missiles, appear designed to evade missile defences. North Korea has also vowed to pursue tactical nuclear weapons, which could allow it to deploy nuclear warheads on SRBMs.

“Every tactical missile launch flaunts how little sanctions have constrained the Kim regime, and how the U.S. … has failed to make North Korea pay a sufficient cost for short-range missile programme development,” Richey said.

The latest launches have drawn both condemnation and an appeal for dialogue from a U.S. administration that has imposed new sanctions over North Korean missile launches and is pushing for more.

U.S. President Joe Biden’s administration imposed its first new sanctions on Pyongyang on Wednesday, and called on the U.N. Security Council to blacklist several North Korean individuals and entities. It also repeated calls for North Korea to return to talks aimed at reducing tension and persuading it to surrender its arsenal of nuclear weapons and ballistic missiles.

North Korea has defended the missile tests as its sovereign right to self-defence and accused the United States of intentionally intensifying confrontation with new sanctions.

In a statement before Friday’s missile tests, the North Korean foreign ministry said that although the United States might talk of diplomacy and dialogue, its actions showed it was still engrossed in its policy of “isolating and stifling” North Korea.

South Korea’s national security council held an emergency meeting after Monday’s test, with members stressing that “above all else, it is essential to start dialogue as soon as possible in order for the situation on the Korean Peninsula to not become more strained and to restore stability”, the presidential Blue House said in a statement.

The nuclear envoys of South Korea, the United States and Japan held a phone call and reviewed the latest test, during which they agreed to continue cooperation for a restart of talks, Seoul’s foreign ministry said.

The launches came as North Korea, more isolated than ever under self-imposed border closures aimed at preventing a COVID-19 pandemic, appeared to be preparing to open at least some trade across its land border with China.

Chinese brokers said they expect the resumption of regular trade with North Korea soon after a North Korean train pulled into a Chinese border town on Sunday in the first such crossing since anti-coronavirus lockdowns began in 2020.

Zhao Tong, a Beijing-based nuclear policy expert at the Carnegie Endowment for International Peace, said North Korea had few reasons to hold back its missile development.

Leader Kim appeared to have little hope of a breakthrough with the United States, and China’s sympathy for North Korea and antipathy towards the United States could encourage North Korea to think that China was unlikely to support any effort by the international community to censure it for the tests, he added.

“North Korea may think this is a safe time to advance its missile development,” Zhao said.

Last week, China criticised the new U.S. sanctions but also called on all sides to act prudently and engage in dialogue to reduce tensions.

China says it enforces existing international sanctions on North Korea, but has joined with Russia to urge the U.N. Security Council to ease the measures, saying they hurt the civilian population.