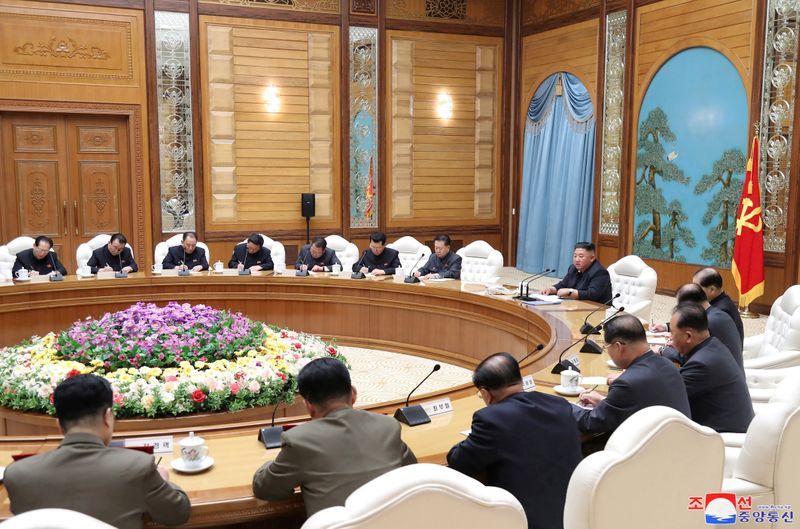 North Korean leader Kim Jong Un takes part in a meeting of the Political Bureau of the Central Committee of the Workers' Party of Korea. REUTERS

North Korea continues testing for the virus, with more than 500 people in quarantine, but has no confirmed infections yet, a country representative of the World Health Organization told Reuters this week.

The Korean Central News Agency said the virus had created obstacles to work on the economy, but the North had enforced consistent and compulsory “strict top-class emergency anti-epidemic measures” to maintain a stable situation.-

At a meeting on Saturday, the political bureau of the central committee of the ruling Workers’ Party of Korea adopted a resolution to take “more thorough state measures” to protect people’s lives and safety against the pandemic, KCNA added.

It also aimed to step up emergency services nationwide against the outbreak and push ahead with economic construction, increasing the national defence capability and stabilising people’s livelihoods this year, the agency said.

But state media photographs showed that none of those at the meeting, including Kim, wore masks or sat unusually far apart from each other.

Neighbouring South Korea reported 32 new infections by the end of Saturday, taking its tally to 10,512, with three more deaths for a total of 214, the Korea Centers for Disease Control and Prevention said.

KCNA said part of Saturday’s agenda was to have been presented to a meeting of the Supreme People’s Assembly, initially set for Friday, but it was not clear if the larger body had already met, or if not, when it is scheduled to do so.

Kim Yo Jong, Kim Jong Un’s sister and a senior government official, was elected an alternate member of the Political Bureau, KCNA added.

Agency photographs of the event showed some military officials wearing masks at the airfield, but not Kim.