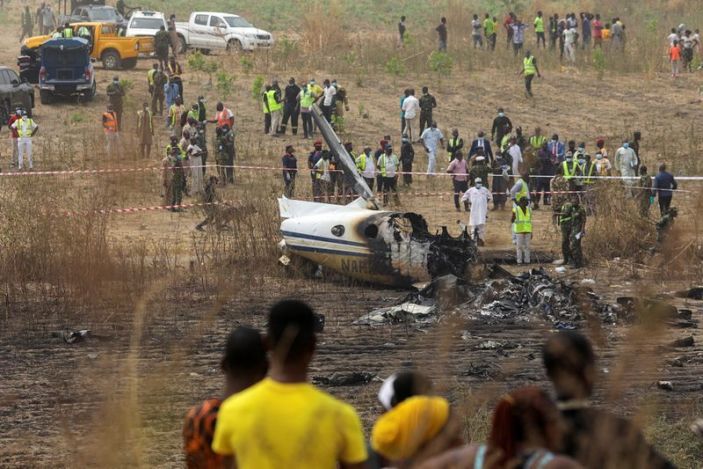 People and rescuers gather at the site where a Nigerian air force plane crashed while approaching the Abuja airport runway, according to the aviation minister, in Abuja, Nigeria February 21, 2021. REUTERS/Afolabi Sotunde

The plane, a Beechcraft King Air 350i, was on its way to the city of Minna, 110 kilometres (68 miles) northwest of the capital, said air force spokesman Ibikunle Daramole in a statement.

The aircraft “crashed while returning to the Abuja Airport after reporting engine failure,” said Daramole. “First responders are at the scene. Sadly, all 7 personnel on board died in the crash.”

The chief of the air force has ordered an investigation into the accident, Daramole said.

In scrubland just outside the airport perimeter, dozens of military and airport officials picked through the charred remnants of the fuselage as fire engines and ambulances stood by.

The smell of burning chemicals lingered in the air but no fire or smoke were visible. Onlookers watched the rescue efforts from behind a cordon.

“As he (the plane’s pilot) was going down, he struggled to go back to the airport, at the end he just crashed,” said Alaba Lawal, who said she witnessed the accident.

“I just saw the whole thing explode, fire and smoke together… When I got there I saw dead bodies on the ground.”

The air force did not provide the identities of those killed in the crash.

The Beechcraft King Air 350i is a twin-propeller aircraft made by Textron Aviation, a unit of the U.S.-based Textron Inc conglomerate. The model was first released around 2009.

Tensions rise between Somalia and UAE over delayed elections