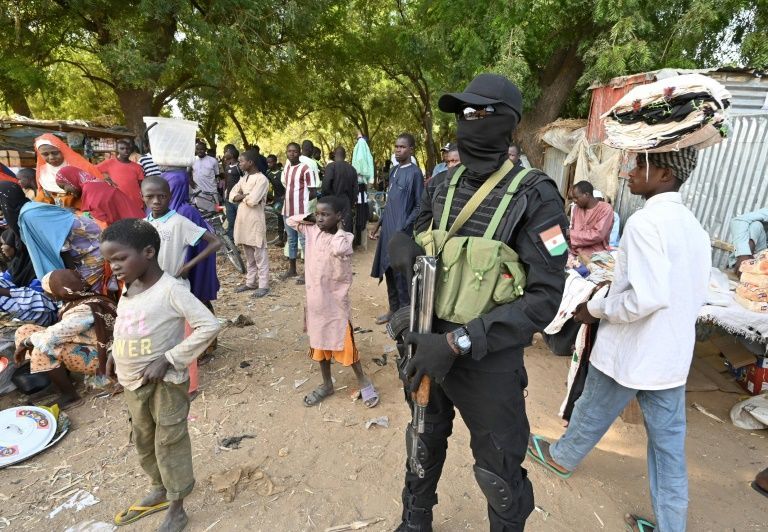 Soldiers were out in force during recent elections. AFP

The Sahel had just turned the page on a grim 2020 when the new year brought a chilling reminder of the region’s vulnerability to ruthless, mobile jihadists.

About 100 people were slaughtered on Saturday in two villages in western Niger, according to local sources — the biggest single massacre of civilians in the Sahel’s eight-year-old Islamist insurgency.

The same day, two soldiers in France’s Barkhane anti-jihadist mission were killed in Mali days after three of their colleagues were killed by a roadside bomb, bringing the total of French military deaths to 50.

Hit-and-run raids and roadside bombs are the deadliest tactics of a jihadist campaign that began in northern Mali before spreading into Niger and Burkina Faso.

Thousands have died and nearly three million have fled their homes, according to UN figures.

The latest attacks come as France contemplates cutting in its 5,100-man force, balancing the ability of Sahel states to defend themselves with French public opinion.

Defence sources in Paris have indicated that President Emmanuel Macron would like to bring home further troops before the next presidential election in 2022.

“Up until now the French have not really questioned France’s role in the Sahel. But one has to be very careful. Public opinion can change very quickly,” a government source told AFP recently.

Niger is caught in a pincer between jihadists crossing from Mali in its southwest and from Nigeria in its southeast.

Scores of armed men on motorbikes carried out Saturday’s attack in the western Tillaberi region, an area that has been a hotbed of insurgents.

Interior Minister Alkache Alhada told AFP after a top-level security meeting on Monday that the country had decreed three days of national mourning.

He promised to increase troop numbers near the Mali border to achieve “greater saturation”.

“We have to stop incursions. We have to create a kind of security cordon, but one of the difficulties is that there’s a void on the Malian side,” he said.

The government plans to double military personnel to “at least 50,000” over the next five years, raising questions about funding as defence already eats up 17 percent of the budget.

Mohamed Bazoum, a former interior minister who at the weekend was declared the winner of the first round of presidential elections, told AFP last month that there had been a shift in tactics on the ground.

The army dismantled static posts in the border area because they were so vulnerable to large-scale hit-and-run raids, and replaced them with patrols.

“We have drawn the lessons from our failures,” Bazoum said.

Jihadist violence comes on top of heightened ethnic tension between rival communities in the Mali-Niger border area, according to the International Crisis Group (ICG) think tank.

Yvan Guichaoua, a researcher at the University of Kent in England, said jihadists stir tensions by recruiting from nomadic communities while regarding sedentary farming groups as “accomplices of the state”.

Interior minister Alhada said the government would hold forums with ethnic and religious leaders to “prevent the risk of intra-ethnic conflict” in the border area.

“I was there yesterday with the prime minister,” Alhada said. “It’s hard — we saw the graves, the victims’ relatives. We have to hold back (anger) to prevent flareups. Some people are calling for weapons.”