The Times of Earth, International Edition
0
832 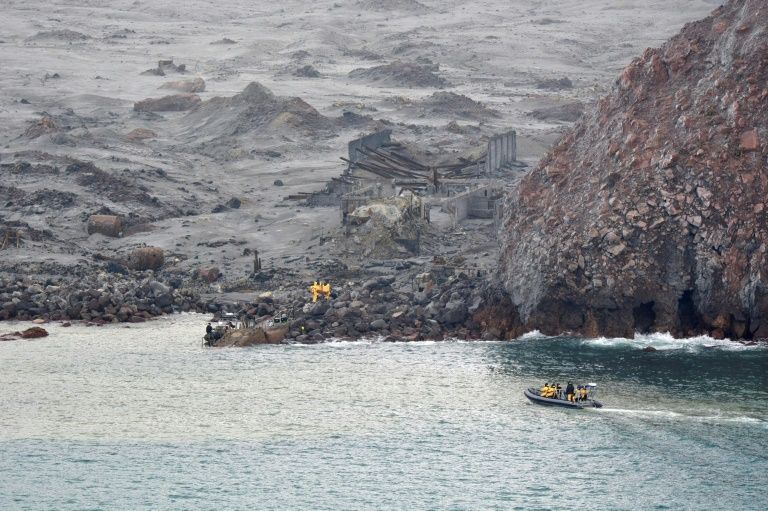 Elite soldiers retrieved six bodies from New Zealand’s volatile White Island volcano on Friday, winning praise for a “courageous” mission carried out under the threat of another eruption.

At first light, two military helicopters set off from Whakatane airport for the offshore volcano, where an eruption Monday killed at least 16 people and severely injured dozens more.

The goal of the team from the bomb disposal squad was to recover the remains of eight people still on New Zealand’s most active volcano, which sits semi-submerged 50 kilometres (30 miles) out to sea.

After a tense four-hour wait, while vulcanologists monitored live seismic feeds for signs of another explosion, police said the majority of the bodies had been safely airlifted to a naval frigate anchored off the coast.

“Those staff showed absolute courage in order to ensure those six people were returned to their loved ones,” police commissioner Mike Bush told reporters, saying they were operating in an “unpredictable and challenging” environment.

Bush said efforts to locate the two remaining bodies were ongoing, with divers searching nearby waters after a corpse was seen floating in choppy seas on Tuesday.

Helicopters were also searching over the Bay of Plenty and Bush did not rule out a return to the island when conditions were safer.

\Drone flights helped locate the six bodies on the caldera before the operation began and the six-strong team laboured to reach them in heavy hazmat suits and breathing gear that restricted movement.

Special forces commander Rian McKinstry said he was “incredibly proud” of the team, who had to deal with heat stress as they prepared the bodies to be airlifted out.

On the eve of the operation, GeoNet vulcanologist Nico Fournier said the dangers facing recovery teams if an eruption occurred included magma, superheated steam, ash and cannonball-like rocks thrown from the caldera at supersonic speed.

As the military began their grim task, police took grieving families out near the volcano on a boat to perform a Maori blessing and locals chanted karakia, or prayers, on the shore as the island smouldered in the distance.

Despite the risk of an eruption inside 24 hours being put at 50-60 percent, Prime Minister Jacinda Ardern said those involved wanted to help grieving families.

“Today was all about reuniting them with their loved ones,” she said, revealing she was on tenterhook for the four hours the military team was on the volcano.

“I felt the same anxiety that I imagine everyone did at that point,” she told reporters.

Many tourists who died on the island were Australians and Canberra’s Foreign Minister Marise Payne said they had been affected by a catastrophic event.

“This is a time of absolute desperation and distress, and to every single one of those families and their friends and their loved ones, our hearts go out at this extraordinarily difficult time,” she said.

The bodies on the island are thought to include New Zealand tour guide Hayden Marshall-Inman.

“It’s going to allow us to grieve and send our loved ones off in the manner they deserve,” he told the New Zealand Herald.

The recovery had been on hold for days as poisonous gases continued billowing from the volcanic vent and the island remained blanketed in a thick layer of acidic ash.

While troops were recovering the bodies, another 28 people — mostly tourists who had been on a day trip to see the natural wonder — were still being treated in hospitals across New Zealand and Australia, many in a critical condition suffering severe burns.

The survivors’ injuries are so severe New Zealand doctors initially estimated they would need to import 1.2 million square centimetres (185,000 square inches) of skin for grafts.

A total of 47 people were on the island during the eruption, hailing from Australia, the United States, Britain, China, Germany, Malaysia and New Zealand.

A coronial process has begun to identify those confirmed dead but police have said it could “take some time”.