The Times of Earth, International Edition
0
257 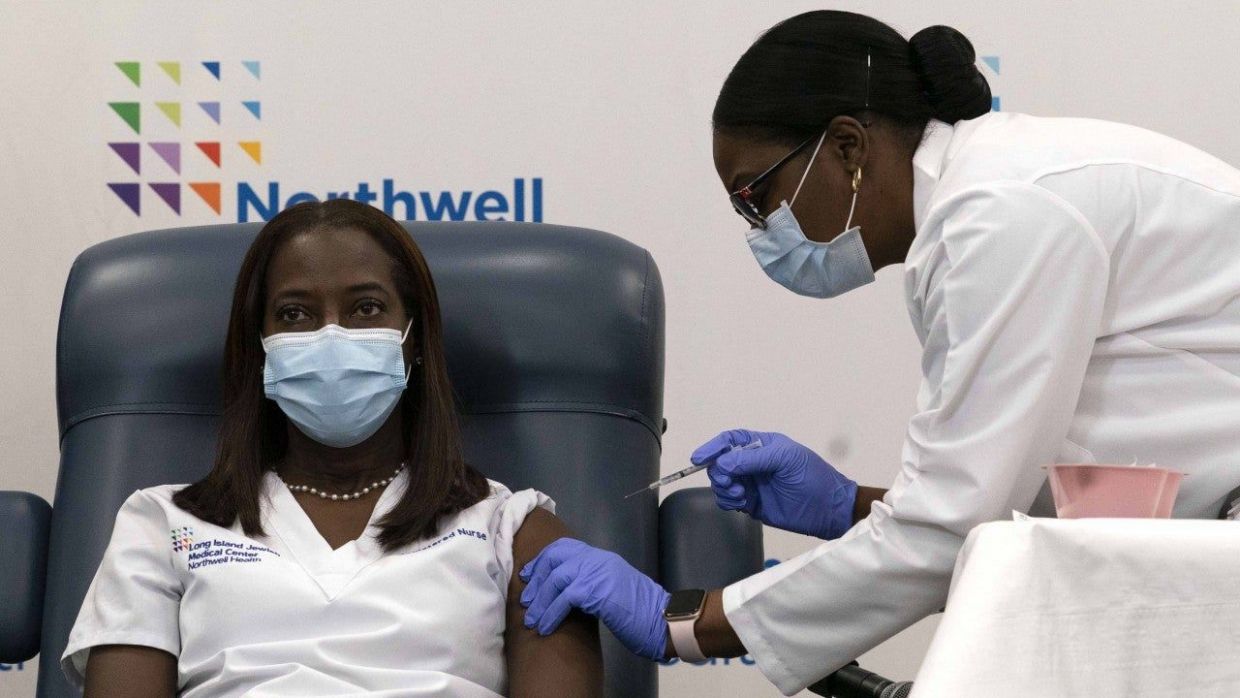 Nurse Sandra Lindsay participates in a conference call with Governor Andrew Cuomo after she is inoculated with the COVID-19 vaccine, at Northwell Health at Long Island Jewish Medical Center in New Hyde Park, New York. REUTERS

An intensive care unit nurse became the first person in New York state to receive the Pfizer/BioNTech COVID-19 vaccine on Monday, marking a pivotal turn in the U.S. effort to control the deadly virus.

Sandra Lindsay, who has treated some of the sickest COVID-19 patients for months, was given the vaccine at Long Island Jewish Medical Center in the New York City borough of Queens, an early epicenter of the country’s COVID-19 outbreak, receiving applause on a livestream with New York Governor Andrew Cuomo.

“It didn’t feel any different from taking any other vaccine,” Lindsay said. “I feel hopeful today, relieved. I feel like healing is coming. I hope this marks the beginning of the end of a very painful time in our history. I want to instill public confidence that the vaccine is safe.”

Northwell Health, the largest health system in New York state, operates some of the select hospitals in the United States that were administering the country’s first inoculations of the Pfizer/BioNTech COVID-19 vaccine outside trials on Monday.

The vaccine, developed by Pfizer and its German partner BioNTech, won emergency-use approval from federal regulators on Friday after it was found to be 95% effective in preventing illness in a large clinical trial.

The first 2.9 million doses began to be shipped to distribution centers around the country on Sunday, just 11 months after the United States documented its first COVID-19 infections.

As of Monday, the United States had registered more than 16 million cases and nearly 300,000 deaths from the virus.

Health officials in Texas, Utah, South Dakota, Ohio and Minnesota said they also anticipated the first doses of the vaccine would be received at select hospitals on Monday and be administered right away.

The first U.S. shipments of coronavirus vaccine departed from Pfizer’s facility in Kalamazoo, Michigan, on Sunday, packed into trucks with dry-ice to maintain the necessary sub-Arctic temperatures, and then were transported to UPS and FedEx planes waiting at air fields in Lansing and Grand Rapids, kicking off a national immunization endeavor of unprecedented complexity.

The jets delivered the shipments to UPS and FedEx cargo hubs in Louisville and Memphis, from where they were loaded onto planes and trucks to be distributed to the first 145 of 636 vaccine-staging areas across the country. Second and third waves of vaccine shipments were due to go out to the remaining sites on Tuesday and Wednesday.

“This is the most difficult vaccine rollout in history. There will be hiccups undoubtedly but we’ve done everything from a federal level and working with partners to make it go as smoothly as possible. Please be patient with us,” U.S. Surgeon General Jerome Adams told Fox News on Monday, adding that he would get the shot as soon as he could.

The logistical effort is further complicated by the need to transport and store the Pfizer/BioNTech vaccine at minus 70 Celsius (minus 94 Fahrenheit), requiring enormous quantities of dry ice or specialized ultra-cold freezers.

Workers clapped and whistled as the first boxes were loaded onto trucks at the Pfizer factory on Sunday.

“We know how much people are hurting,” UPS Healthcare President Wes Wheeler said on Sunday from the company’s command center in Louisville, Kentucky. “It’s not lost on us at all how important this is.”

MORE DOSES ON THE WAY

More than 100 million people, or about 30% of the U.S. population, could be immunized by the end of March, Moncef Slaoui, the chief advisor to the U.S. government’s Operation Warp Speed coronavirus vaccine initiative, said in an interview with Fox News on Sunday.

Healthcare workers and elderly residents of long-term care homes will be first in line to get the inoculations of a two-dose regimen given about three weeks apart. That would still leave the country far short of the herd immunity that would halt virus transmission, so health officials have warned that masks and social distancing will be needed for months to control the currently rampaging outbreak.

Pfizer Chief Executive Officer Albert Bourla told CNN in an interview on Monday that most of the 50 million vaccine doses the company will provide this year have been manufactured, adding that it plans on producing 1.3 billion doses next year. Approximately half will be allocated to the United States, he said.

But Bourla said Pfizer is “working very diligently” to increase the amount of doses available because demand is very high. At the same time, he said, the company has not reached an agreement with the U.S. government on when to provide an additional 100 million doses next year.

Slaoui said the United States hopes to have about 40 million vaccine doses – enough for 20 million people – distributed by the end of this month. That would include vaccines from both Pfizer and Moderna Inc. An outside U.S. Food and Drug Administration advisory panel is scheduled to consider the Moderna vaccine on Thursday, with emergency use expected to be granted shortly after.

On Friday, Moderna announced it had struck a deal with the U.S. government to deliver 100 million additional doses in the second quarter.