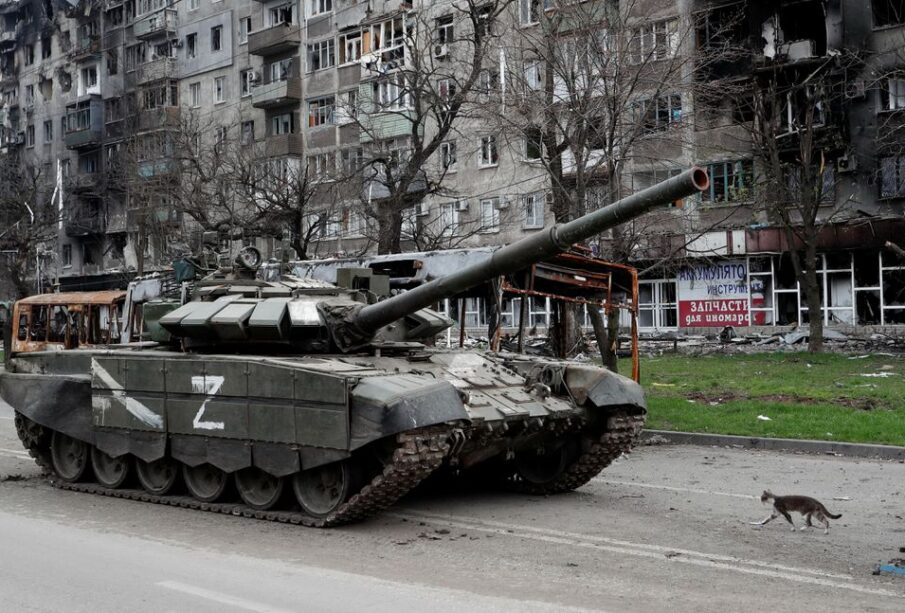 A cat walks next to a tank of pro-Russian troops in front of an apartment building damaged during Ukraine-Russia conflict in the southern port city of Mariupol, Ukraine April 19, 2022. REUTERS/Alexander Ermochenko

Russia gave Ukrainian fighters holding out in Mariupol a new ultimatum to surrender on Wednesday as it pushed for a decisive victory in its offensive in the east, while Western governments promised to give Ukraine more military help.

Thousands of Russian troops backed by artillery and rocket barrages were advancing in what Ukrainian officials have called the Battle of the Donbas.

Russia’s nearly eight-week-long invasion has failed to capture any of Ukraine’s largest cities, forcing Moscow to refocus in and around separatist regions in the east.

The biggest attack on a European state since 1945 has led to nearly 5 million people fleeing abroad and reduced cities to rubble.

Russia was hitting the Azovstal steel plant, the main remaining stronghold in the southeastern port city of Mariupol, with bunker-buster bombs, a Ukrainian presidential adviser said late on Tuesday. Reuters could not verify the details.

Russia has been trying to take full control of Mariupol for weeks. Its capture would be a huge strategic prize, linking territory held by pro-Russian separatists in the east with the Crimea region that Moscow annexed in 2014.

But not a single Ukrainian soldier had laid down their weapons after an earlier ultimatum to surrender lapsed, Russia’s defence ministry said, as it renewed its deadline.

Ukrainian commanders have vowed not to surrender and Ukraine’s general staff said early on Wednesday fighting was going on at the steel plant while Russian forces attempted an offensive near the northeastern city of Kharkiv.

British military intelligence said fighting in the Donbas region was intensifying as Russian forces tried to break through Ukrainian lines and disrupt its reinforcements.

Russia says it launched what it calls a “special military operation” on Feb. 24 to demilitarise and “denazify” Ukraine. Kyiv and its Western allies reject that as a false pretext.

The United States and its allies have responded with sweeping sanctions on Russia and support for Ukraine.

The White House said new sanctions were being prepared and U.S. President Joe Biden is expected to announce a new military aid package about the same size as last week’s $800 million one in the coming days, sources told Reuters.

U.N. Secretary-General Antonio Guterres called for a four-day humanitarian pause in the fighting this weekend, when Orthodox Christians celebrate Easter, to allow civilians to escape and humanitarian aid to be delivered.

Ukraine said Russian forces in their new offensive had captured the town of Kreminna, an administrative centre of 18,000 people in Luhansk, one of the two Donbas provinces.

Driven back by Ukrainian forces in March from an assault on Kyiv in the north, Russia has instead poured troops into the east for the launch of what its foreign minister, Sergei Lavrov, confirmed was “another stage of this operation”.

Russian forces have also made long-distance strikes at other targets including the capital and Kharkiv, where at least four people were killed by missiles, authorities said on Tuesday.

In one suburban street, the body of an elderly man lay face down near a park, a ribbon of blood running into the gutter.

“He worked in security not far from here,” a resident named Maksym told Reuters. “The shelling began and everyone fled. Then we came out here, the old guy was already dead.”

Ukrainian authorities in Donetsk said three civilians had been killed and six wounded in the past 24 hours.

Overnight shelling in central Avdiivka had left part of the town without electricity, the regional administration said in a statement.

In Mariupol, scene of the war’s heaviest fighting and worst humanitarian catastrophe, about 120 civilians living next to the Azovstal steel plant left via humanitarian corridors, the Interfax news agency said on Tuesday, quoting Russian state TV.

Drone footage on Tuesday showed people buying food and other items at a makeshift market, as well as charging their mobile phones from a generator. A Reuters correspondent said prices at the market were very high.

Mariupol has been besieged since the war’s early days. Tens of thousands of residents have been trapped and Ukraine believes more than 20,000 civilians have been killed there.

“The Russian army will forever inscribe itself in world history as perhaps the most barbaric and inhuman army in the world,” Ukrainian President Volodymyr Zelenskiy said.

“Deliberately killing civilians, destroying residential quarters and civilian infrastructure, and using all kinds of weapons, including those prohibited by international conventions,” he added in a video address.

Russia has denied using banned weapons or targeting civilians and says, without evidence, that signs of atrocities were staged.

Video released by Ukraine’s Azov battalion purported to show people living in a network beneath the sprawling Azovstal steel plant, where they say hundreds of women, children and elderly civilians are sheltering with supplies running out.

“We lost our home; we lost our livelihood. We want to live a normal, peaceful life,” an unidentified woman says in the video.

“There are lots of children in here – they’re hungry. Get us out of here.”

Reuters could not independently verify where or when the video was shot.