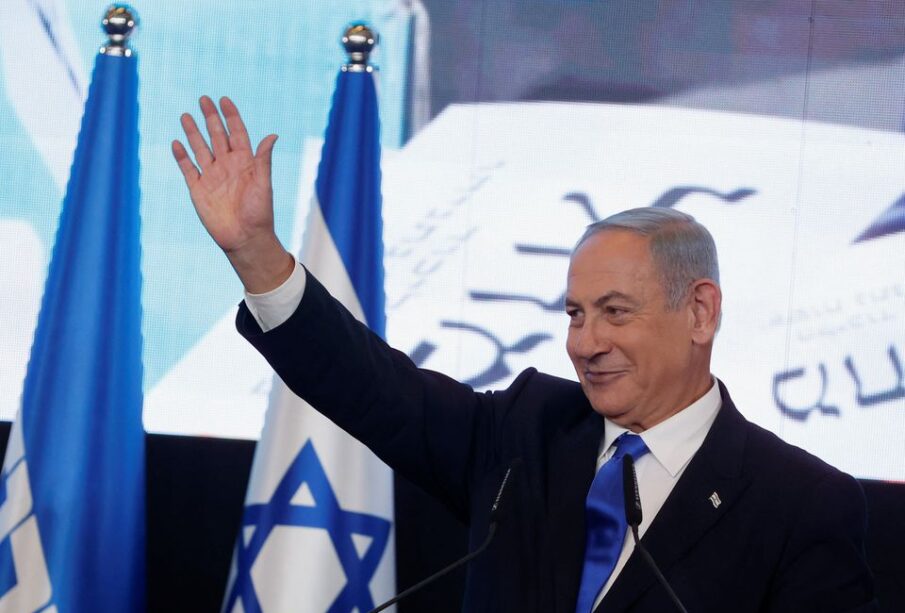 Israel’s former premier Benjamin Netanyahu was poised to return to power, saying on Wednesday that his right-wing camp was on the cusp of a resounding election win.

With roughly 70% of votes counted, Netanyahu’s conservative Likud and its likely religious and far-right allies were on pace to control a majority in parliament. Prime Minister Yair Lapid’s short-lived ruling coalition that hailed largely from the center-left appeared to collapse.

“We have won a huge vote of confidence from the people of Israel,” a smiling Netanyahu told cheering supporters at his Likud party election headquarters. “We are on the brink of a very big victory.”

His voice hoarse from weeks of campaigning across the country, Netanyahu vowed to form a “stable, national government,” as the crowd interrupted him singing “Bibi, king of Israel.”

Though the landscape could shift as the ballot count trickles in, the partial tally showed Netanyahu, who is on trial for corruption he denies, leading a bloc of four parties taking 67 of the Knesset’s 120 seats.

Less than 18 months out of office, Netanyahu said he would wait for official results.

But the fragile alliance unravelled a year into its rule.

Lapid has stopped short of conceding the election and said he would wait until the final count.

“The people want a different way. They want security,” Netanyahu said, “they want power, not weakness … they want diplomatic wisdom, but with firmness.”

Israel’s fifth election in less than four years was dominated by the outsized personality of Netanyahu, whose legal battles have fed the stalemate blocking Israel’s political system since 2019 and deepened the split between his supporters and opponents.

The campaign was shaken up by firebrand West Bank settler Itamar Ben-Gvir and his ultra-nationalist Religious Zionism list, now set to be the third-largest party in parliament after surging in from the political margins.

Netanyahu has been counting on support from Ben-Gvir and fellow far-right leader Bezalel Smotrich.

But the prospect of a government including Ben-Gvir risks alarming allies including Washington. He is a former member of Kach, a group on Israeli and U.S. terrorist watchlists, and was once convicted for racist incitement.

In an apparent attempt to allay fears abroad, Netanyahu, who in 2020 forged formal diplomatic ties with the United Arab Emirates and Bahrain, said a government under his leadership would act responsibly, avoid “unnecessary adventures” and “expand the circle of peace.”

Nonetheless, his possible comeback reinforced Palestinian scepticism that a political solution to the conflict was likely after a campaign which unrolled during increasing violence in the occupied West Bank, with near-daily raids and clashes.