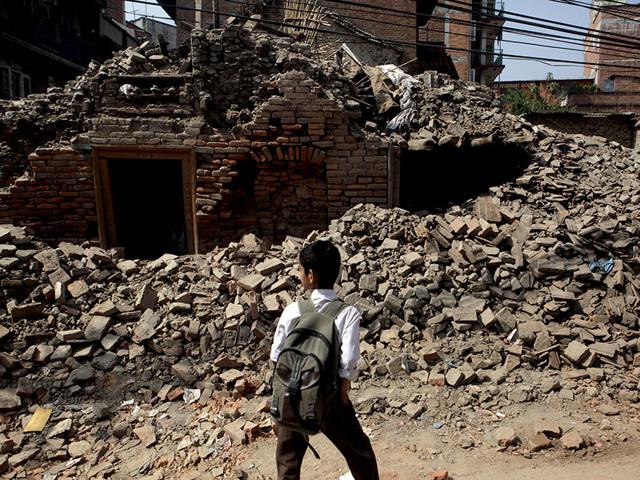 For the villagers of Sirdibas in Nepal, one of hundreds of isolated mountain communities dotting the vast Himalayan region, a trip to the nearest market meant a difficult three-day journey by donkey even before the recent 7.8-magnitude earthquake.
Since the quake struck on April 25, however, flattening villages and killing more than 8,700 people, that rudimentary trail has been cut off, and the monsoon rains mean it cannot be repaired for months.
Almost every house in Sirdibas, in the worst-hit district of Gorkha west of the capital Kathmandu, was damaged by the quake — a story echoed in countless communities across Nepal, where at least half a million homes were destroyed.
But villagers say getting supplies is the biggest battle — a worry that becomes even more pressing as the monsoon nears.
“We don\’t have access to market, we can\’t buy anything and we need rice and cooking oil,” said 60-year-old Lani Gurung, one of around 100 villagers who gathered to speak to the local United Nations coordinator Susan Robertson on a recent visit.
Many villages in Gorkha in the foothills of the Himalayas were inaccessible by road even before the quake.
They are now even more cut off, forced to rely on helicopter deliveries for basic supplies.
The UN estimates that 2.8 million people are in need of assistance after the quake, and more than 800,000 of those are in hard-to-reach areas.
It has warned that access problems will worsen significantly in the coming weeks as the monsoon rains begin.
With helicopters in short supply, the UN World Food Programme has hired thousands of porters left unemployed by a collapse in tourist numbers to deliver aid to remote mountainous areas.
The operation aims to deliver food and shelter materials to an estimated 100,000 people as well as clearing walking trails, many of which have been blocked by quake-triggered landslides.
Around 10 kilometres (six miles) of the path from Sirdibas is blocked, according to one of the 37 soldiers deployed in the village for relief work.
The villagers tried using an old route, but found that too was impossible, and there is a constant risk of falling rocks.
One of the few local generators of income is tourism, as the village sits on a popular trekking route, adding to the need to repair the path quickly.
The quake also took its toll on the donkeys who locals rely on to carry heavy loads across long distances.
Hira Chhetri, a villager who works for the National Trust for Nature Conservation, says that between 200 and 300 of the around 2,000 donkeys living in the area were killed.
“But that\’s a small problem compared with everything else,” he smiles.
Even the food that the villagers usually grow is in short supply after the quake.
The main crops are corn and potatoes, but quake damage has blocked access to some fields, while others have been ravaged by insects, adding to the misery.
“Usually people store their crops inside their house. But this time they have nothing to store,” said Ram Kumar, the head of the village committee.
Sirdibas has around 2,500 residents according to a 2011 census, but they are spread over a large area and there are only a few hundred in the small village itself.
For the moment, emergency relief is still coming — the UN and Nepal army helicopters airdrop supplies of rice and sugar every week.
But even if the villagers are not going hungry, the difficulty of sourcing food supplies has other consequences.
Lessons are about to restart at the local school, using rigged-up shelters after many of the building\’s stone walls crumbled in the quake.
But 120 of the 500 pupils board because they live two days\’ walk away and the teacher, elegantly dressed in a long yellow skirt and purple shawl, says they will not be able to return because the village cannot feed them.
And the imminent onset of the monsoon rains means that emergency shelters — being airlifted in by the Red Cross — are another, urgent priority.
SOURCE: AFP
Previous Article