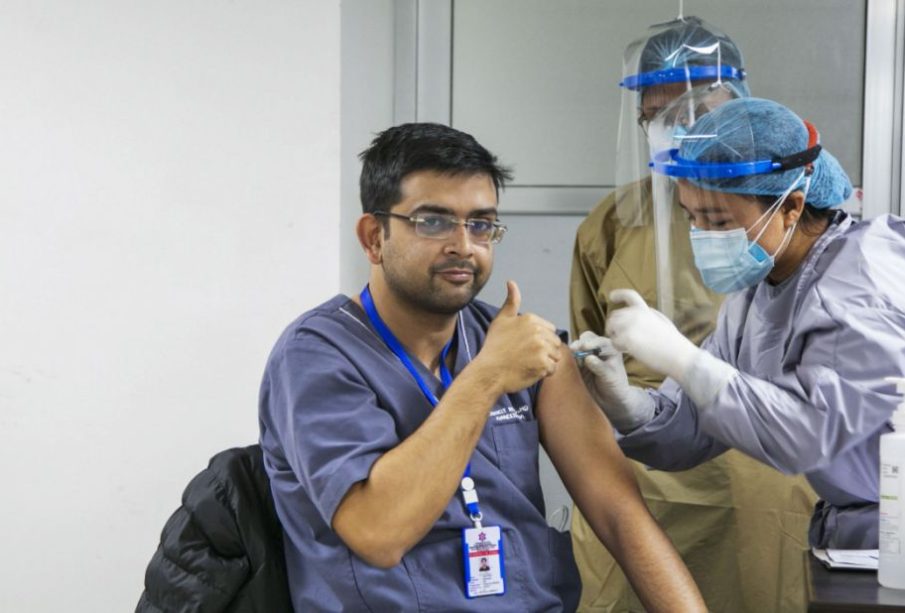 The Himalayan nation of Nepal launched its largest immunisation campaign on Wednesday with its first coronavirus vaccinations for medical workers, following a gift of one million doses from giant neighbour India.

Wearing a traditional black peaked cap and sleeveless red vest, a doctor at a teaching hospital in the capital, Kathmandu, became the first recipient of a dose taken from a bed of ice in a cubical blue cooler and injected by masked and gowned staff.

“We have a new weapon now and I hope we will be able to defeat the coronavirus soon,” said Dinesh Kafle, 50, after he was applauded by those queuing for their turn while he sat in a white-walled room before a poster advertising the campaign.

“We are in talks with India to procure more vaccines at a proper price,” added Oli, who is wooing popular support at a time when he is seeking early elections.

This month, India said it would give millions of vaccine doses to its South Asian neighbours, drawing their praise in what could prove a pushback against China’s acitivities in the region.

Authorities say China, which had promised to help Nepal deal with the pandemic, has yet to get clearance for its Sinopharm shots.

In recent years the mainly Hindu nation wedged between China and India has become a playground for competition over diplomatic and strategic influence between the Asian giants.

For years India has struggled to match the pace of Chinese investment in Nepal and the Indian Ocean countries of the Maldives and Sri Lanka, where China is building ports, roads and power stations in its Belt and Road Initiative.

But the demand for vaccines in these countries, desperate to revive their tourism-dependent economies, has offered Prime Minister Narendra Modi’s government a way to claw back ground, diplomats have said.

“We have been able to begin our vaccination drive within a week after India began,” said Oli, recently thrown out of the ruling Communist party by opponents over his abrupt December decision to dissolve parliament and seek an early election.