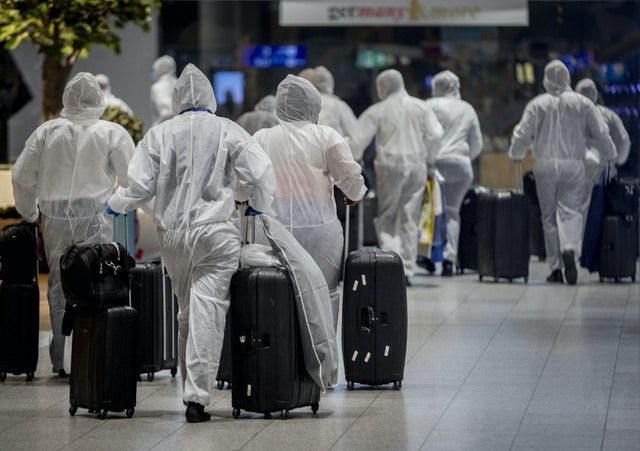 Governments around the world are wrestling with when and how to lift economically painful virus-control measures as unemployment rises.

Mandatory lockdowns to stop the spread of the new virus, which has so far infected more than 2.2 million people and for which there is no vaccine, have brought widespread hardship.

In a joint statement on Saturday, a group of 13 countries including Canada, Brazil, Italy and Germany called for global cooperation to lessen the economic impact of the pandemic.

“It is vital that we work together to save lives and livelihoods,” they said.

The group, which also includes Britain, France, Indonesia, Mexico, Morocco, Peru, South Korea, Singapore and Turkey, said it was committed to “work with all countries to coordinate on public health, travel, trade, economic and financial measures in order to minimise disruptions and recover stronger”.

The countries emphasised the need to maintain “air, land and marine transportation links” to ensure the continued flow of goods including medical equipment and aid, and the return home of travellers.

Most governments remain cautious, even as the economic toll rises.

Public health experts warn that easing shutdowns must be accompanied by wider testing and tracing of infected people to keep the virus from coming back.

Singapore, which has been held up as a model for other nations after taking strong measures to clamp down on the virus, reported a new daily record of 942 infections on Saturday that saw its total surge to 5,992.

The number of cases in the city-state has more than doubled just this week alone amid an explosion of cases among foreign workers staying in crowded dormitories, that now make up 60% of Singapore’s infections.

Japan also reported a fresh surge of 556 new cases on Saturday, pushing its total to over 10,000.

Prime Minister Shinzo Abe expressed concern Friday that people were not observing social distancing and announced a 100,000-yen cash handout to each resident as an incentive to stay home.

In the United States, whose administration did not join in the call among other world leaders, the debate has taken on partisan tones ahead of the presidential election in the autumn.

President Donald Trump urged supporters to “liberate” three states led by Democratic governors, tweeting the kind of rhetoric some have used to demand an end to stay-at-home orders that have thrown millions out of work.

Protests against stay-at-home orders – organised by groups backing “small government” and Trump supporters – were planned in several cities throughout the US, including at the the Texas Capitol, despite assurances from Republican governor Greg Abbott that restrictions would begin easing next week.

Spain reached 20,000 deaths and total infections increased to more than 190,000. The country’s health authorities reported 565 deaths in the last 24 hours.

In Africa, the pandemic is only just getting under way.

The continent now has more than 1,000 coronavirus deaths, according to the Africa Centres for Disease Control and Prevention.

Fifty-two of the continent’s 54 countries have reported the virus, with the total number of cases more than 19,800 as of Saturday morning.

Top leaders of China’s ruling Communist Party called for deficit spending and a more flexible monetary policy after the economy shrank 6.8% in the first three months of the year.

France’s lower house of parliament approved an emergency budget overnight that takes into account the government’s 110 billion euro (£95 billion) plan to save the economy from virus-related collapse.

The government has warned that France’s economy, one of the world’s biggest, could shrink 8% this year and see its worst recession since the Second World War.

South Korea’s Health Minister Kim Gang-lip said on Saturday that new guidelines could be issued soon that officials have said would allow people to engage in “certain levels of economic and social activity”.

The East Asian country was among the 13 nations to issue the joint statement on protecting global trade.

The declaration also stressed “the importance and critical role of the scientific community in providing guidance to governments,” and suggested pooling scientific resources and efforts to tackle the pandemic.

The outbreak has killed at least 154,000 people worldwide, according to a Johns Hopkins University tally based on figures supplied by government health authorities around the globe.