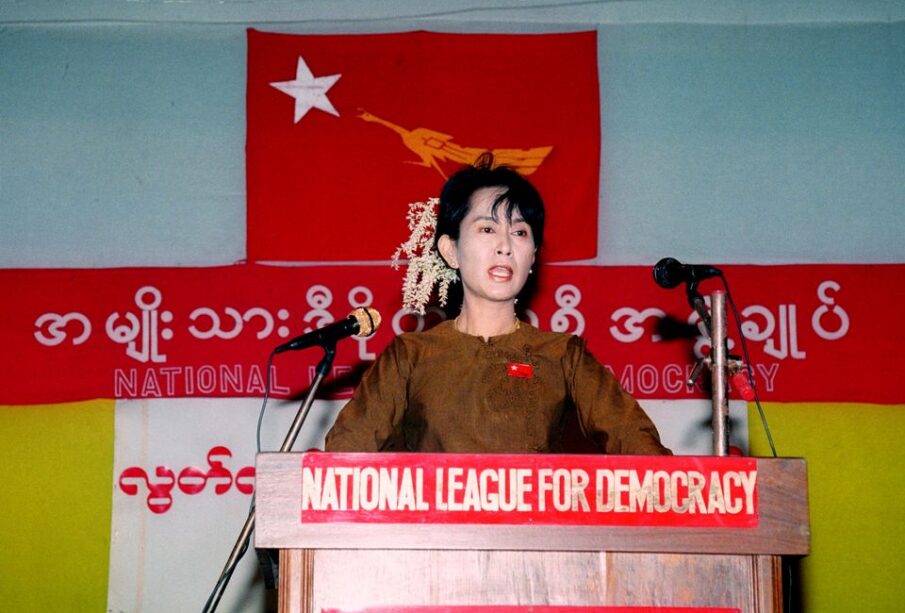 Burmese opposition leader Aung San Suu Kyi makes a speech during the country's 49th Independence Day celebrations in a thatch-roofed meeting hall in the compound of her house in Rangoon on January 4, 1997. REUTERS/Apichart Weerawong

A court in military-ruled Myanmar jailed deposed leader Aung San Suu Kyi for four years on Monday on charges of incitement and breaching coronavirus restrictions, said a source following proceedings in a case that critics described as “farcical”.

President Win Myint was also sentenced to four years in prison, the source, who spoke on condition of anonymity, said, as the court delivered its first verdicts in numerous cases against Suu Kyi and other civilian leaders detained by the military in a coup on Feb. 1.

Myanmar has been in turmoil since the coup against Suu Kyi’s democratically elected government sparked widespread protests and raised international concern about the halt to tentative political reforms following decades of military rule.

Nobel peace prize winner Suu Kyi, 76, has been detained since the coup along with most senior leaders of her National League for Democracy (NLD) party. Others are abroad or in hiding and no party spokesperson was available for comment.

“The charges were ludicrous, designed as retribution against popular leaders. So the guilty verdicts and prison terms are no surprise,” said Richard Horsey, a Myanmar expert at the International Crisis Group think tank.

A military spokesman did not respond to attempts by Reuters to reach him for comment on the sentencing, which was widely reported in domestic media.

The military has not given details of where Suu Kyi has been detained and it was not immediately clear if the sentencing would mean any immediate change in her circumstances.

The trial in the capital, Naypyitaw, has been closed to the media and the junta’s public information outlets have not mentioned the proceedings. Suu Kyi’s lawyers have been barred from communicating with the media and public.

Suu Kyi faces a dozen cases that include multiple corruption charges plus violations of a state secrets act, a telecoms law and COVID-19 regulations, which carry combined maximum sentences of more than a century in prison. read more

Suu Kyi and co-defendant Win Myint received jail terms of two years for incitement and the same term for breaches of coronavirus protocols. They had denied the charges.

Western countries have demanded Suu Kyi’s release and condemned the violence since the coup, in which some 1,300 people have been killed, according to rights groups.

China, which has long had good relations with the military as well as Suu Kyi’s government, urged all parties to “bridge their differences under the constitutional and legal framework, and continue to advance the hard-earned democratic transition”, a foreign ministry spokesperson said.

Suu Kyi’s supporters say the cases against her are baseless and designed to end her political career and tie her up in legal proceedings while the military consolidates power.

Her jailing had been widely expected.

“I don’t expect anything out of this broken justice system,” Maw Htun Aung, a deputy minister in an opposition parallel government, told Reuters after the sentencing.

The junta says Suu Kyi is being given due process by an independent court led by a judge appointed by her own administration.

Suu Kyi, the daughter of the hero of Myanmar’s independence, spent years under house arrest for her opposition to military rule but was freed in 2010 and led her NLD to a landslide victory in a 2015 election.

Her party won again in November last year but the military said the vote was rigged and seized power weeks later. The election commission at the time dismissed the military’s complaint.

Rights group Amnesty International said the charges against Suu Kyi were farcical and her jailing showed the military’s determination to eliminate opposition and suffocate freedoms.

Historian and author Thant Myint U said military leaders thought their predecessors who launched reforms more than a decade ago had gone too far in allowing Suu Kyi back into politics and the entire reason for the coup was to exclude her.

“She remains far and away the most popular (figure) in Myanmar politics and may still be a potent force in what’s to come,” he told Reuters.

Matthew Smith, chief executive of the Fortify Rights group, said the sentencing was “part of a widespread and systematic attack on the civilian population” while the group ASEAN Parliamentarians for Human Rights said no-one was fooled by the outcome of the trial.

“It’s been clear that the charges against Aung San Suu Kyi and the dozens of other detained MPs, have been nothing more than an excuse by the junta to justify their illegal power grab,” it said in a statement.