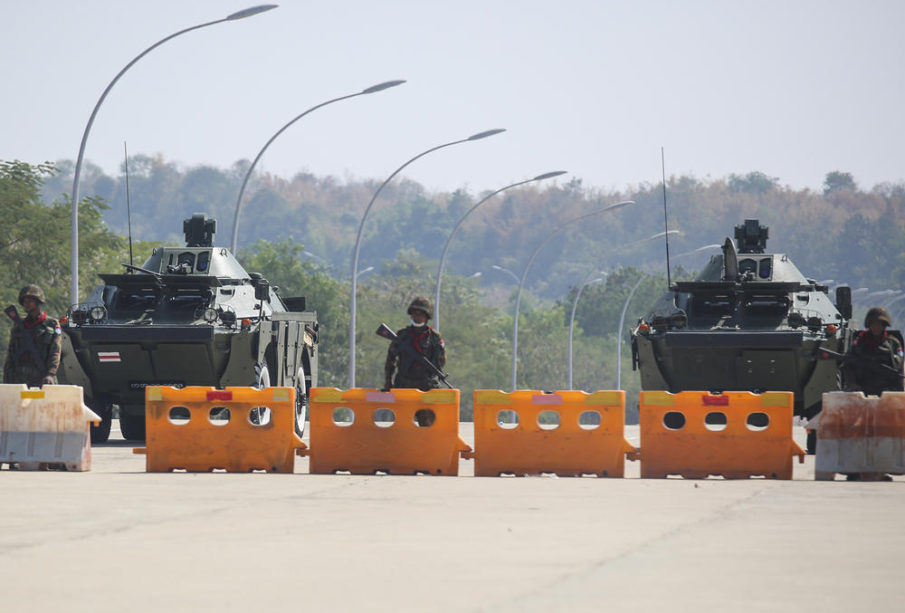 Military soldiers with tanks and police truck block the road near parliament in Naypyidaw this afternoon in Myanmar on February 1, 2021. Myanmar's military announced Monday that it has seized power and will rule the country for at least one year after detaining its top political leaders. (Photo by Stringer/Anadolu Agency via Getty Images)

A military coup in Myanmar and a mass crackdown on dissidents in Russia are presenting early tests for the Biden administration as it tries to reestablish American primacy as a worldwide pro-democracy leader.

Having taken office with a pledge to restore ironclad U.S. support for human rights, freedom of speech and political openness, President Joe Biden is being confronted with two serious challenges in two disparate parts of the world that had either been neglected or the subject of inconsistent messaging during the Trump era.

After investing decades of time, energy and money into promoting democracy in both Myanmar and Russia, the U.S. now faces challenges in each that could affect the global balance of power, with the Myanmar turmoil potentially strengthening China’s hand.

And, while neither situation can be directly tied to domestic political uncertainty in the United States, experts believe foreign governments might be taking cues from the vestiges of America’s perceived rudderlessness in the final months of President Donald Trump’s term.

“It is not always about us,” said Dan Fried, a former senior U.S. diplomat for Europe. “Each has its own dynamic, but they certainly take cues from us. What links the two is that during the campaign, the Biden team talked about support for democracy being a North Star — a guiding point for democracy.”

Biden’s aides have rejected suggestions that the Jan. 6 insurrection at the Capitol fueled by Trump will hurt U.S. influence in the long run. But they have acknowledged it as a factor as Biden tries to reassert American moral leadership after four years of Trump’s perceived diffidence.

“The United States remains a country in the world that is looked to for … leadership, and it’s going to take some time, but he’s certainly committed to doing that,” White House press secretary Jen Psaki said of Biden on Monday.

She spoke after Biden released a statement saying he would be looking at reimposing sanctions on Myanmar, also known as Burma, that had been lifted after the country’s partial return to democracy during the Obama administration.

“The United States removed sanctions on Burma over the past decade based on progress toward democracy,” Biden said. “The reversal of that progress will necessitate an immediate review of our sanction laws and authorities, followed by appropriate action. The United States will stand up for democracy wherever it is under attack.”

In Myanmar, the army took control of the government after a brief experiment with limited democracy, detaining former opposition leader Aung San Suu Kyi and giving China an even bigger potential opening into a neighboring country where the West had exerted great effort to blunt Beijing’s significant influence.

“This is a setback for Myanmar and for democratic governance across Asia,” said Danny Russel, a former assistant secretary of state for East Asia and the Pacific, who is now vice president for International Security and Diplomacy at the Asia Society Policy Institute. “It’s part of an unfortunate slide toward authoritarianism and it’s quite worrying. It sets an appalling example for other countries.”

“It’s certainly an early crisis for the Biden administration, and it’s really crystalized the contrast between its support for democracy and the Chinese support for authoritarianism,” he said.

Tensions in Myanmar have been building for some time but have been largely under the radar of a Washington preoccupied with the coronavirus after decades of public and private pressure on Yangon to institute democratic reforms.

In Russia, despite Trump’s political machinations, the situation has been at a slow boil for some years after attempts to draw Moscow into the democratic fold beginning with the end of the Cold War and collapse of the Soviet Union. Confronting the Russians will be more difficult.

There, President Vladimir Putin is using an iron fist to try to quell demonstrations in support of opposition figure Alexei Navalny, flying in the face of warnings from Washington and Europe.

“It’s a challenge for Biden, but they’re not challenging him directly,” said Fried, who is now with the Atlantic Council. He said that sanctions might not be effective in the long run but that they will get attention. “They could do more,” he said. “It would be appropriate, and it would send a message to Russian society that the Americans aren’t stupid, that they know what’s going on.”

Secretary of State Antony Blinken said in an interview aired on Monday that new sanctions against Russia are being considered, not only for the Navalny crackdown but also for a major cyberattack, election interference and purported bounties offered to the Taliban for targeting American troops in Afghanistan.

“We’re looking into all of these things,” Blinken told NBC News. “All of them are under review. And depending on the findings of those reviews, we will take steps to stand up for our interests and stand against Russian aggressive actions.”

AstraZeneca vaccine to arrive in France by next week