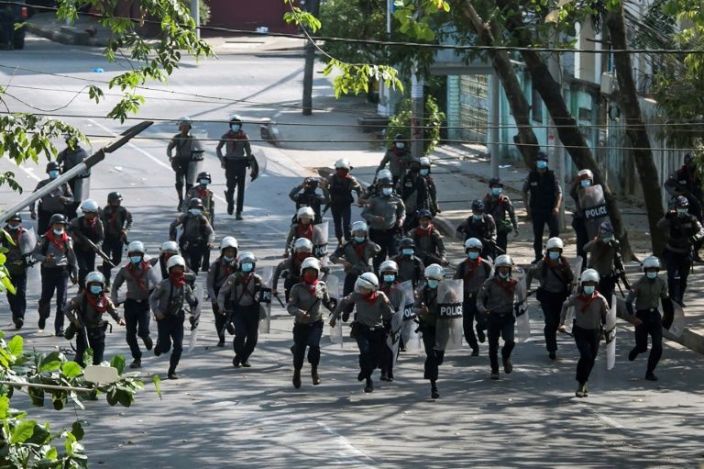 Defiant anti-coup protesters returned to cities and towns across Myanmar on Thursday after dozens of people were killed in the deadliest day of the junta's crackdown, with global powers condemning the "brutal violence". AFP

Police in Myanmar broke up demonstrations in several places with tear gas and gunfire on Thursday but there was no immediate word on casualties a day after the United Nations said 38 people had been killed in the bloodiest day since last month’s coup.

Undeterred by the crackdown, activists said they refused to accept military rule and were determined to press for the release of elected government leader Aung San Suu Kyi and recognition of her victory in a November election.

“We know that we can always get shot and killed with live bullets but there is no meaning to staying alive under the junta,” activist Maung Saungkha told Reuters.

Police later opened fire and used tear gas to break up protests in Yangon and the central town of Monywa, witnesses said. Police also fired in the town of Pathein, to the west of Yangon, media reported.

In Yangon, crowds of protesters soon assembled again to chant slogans and sing.

Big crowds also gathered peacefully for rallies elsewhere, including the second city of Mandalay and in the historic temple town of Bagan, where hundreds marched carrying pictures of Suu Kyi and a banner saying: “Free our leader”, witnesses said.

Earlier on Thursday, five fighter jets made several low passes in formation over Mandalay, residents said, in what appeared to be a show of military might.

On Wednesday, police and soldiers opened fire with live rounds with little warning in several cities and towns, witnesses said. U.N. special envoy on Myanmar, Christine Schraner Burgener, said in New York that there had been 38 people killed in the bloodiest day since the Feb. 1 coup.

The latest deaths took toll to more than 50 as the military tries to impose its authority. security forces now seem intent on breaking the back of the anti-coup movement through wanton violence and sheer brutality,” said Richard Weir, a researcher at Human Rights Watch.

In one incident, a man in custody appeared to have been shot in the back, the group said.

A spokesman for the ruling military council did not answer telephone calls seeking comment.

Suu Kyi’s National League for Democracy party said in a statement that flags would fly at half mast at its offices to commemorate the dead.

Schraner Burgener said she warned Myanmar deputy military chief Soe Win that the military was likely to face strong measures from some countries and isolation in retaliation for the coup. answer was: ‘We are used to sanctions, and we survived’,” she told reporters. “When I also warned they will go (into) isolation, the answer was: ‘We have to learn to walk with only few friends’.”

The U.N. Security Council is due to discuss the situation on Friday in a closed meeting, diplomats said.

U.N. Special Rapporteur Tom Andrews said the “systematic brutality” of the military was on display and he urged Security Council members to view images of the violence.

U.S. State Department spokesman Ned Price said the United States was “appalled” by the violence and was evaluating how to respond. United States has told China it expects it to play a constructive role, he said. China has declined to condemn the coup which its state media called a “major cabinet reshuffle”.

The European Union said the shootings of unarmed civilians and medical workers were clear breaches of international law. It also said the military was stepping up repression of the media.

Save the Children said four children were killed on Wednesday including a 14-year-old boy who Radio Free Asia reported was shot dead by a soldier on a passing convoy of military trucks.

Images of a 19-year-old woman, one of two shot dead in Mandalay, showed her wearing a T-shirt that read “Everything will be OK”. in Yangon ordered three medics out of an ambulance and beat them with gun butts and batons, video broadcast by U.S.-funded Radio Free Asia showed. Reuters was unable to verify the video independently.

The military justified the coup by saying its complaints of voter fraud in the Nov. 8 vote were ignored. Suu Kyi’s party won by a landslide, earning a second term.

The election commission said the vote was fair.

Suu Kyi, 75, has been held incommunicado since the coup but appeared at a court hearing via video conferencing this week and looked in good health, a lawyer said.

Myanmar forces kill at 38 protesters in bloodiest day yet