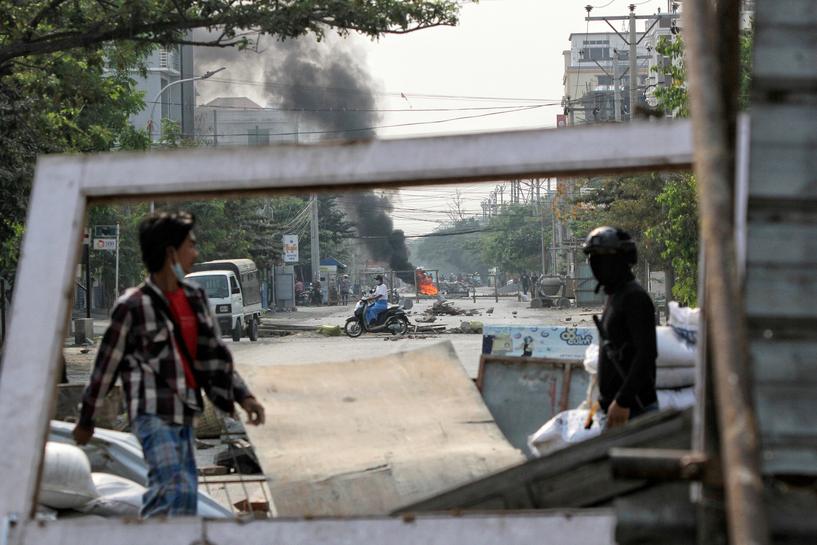 Demonstrators are seen behind barricades during a protest against the military coup in Mandalay, Myanmar March 22, 2021. REUTERS

Junta spokesman Zaw Min Tun said 164 protesters had been killed in the violence and expressed sadness at the deaths.

“They are also our citizens,” he told a news conference in the capital Naypyitaw on Tuesday.

The Assistance Association for Political Prisoners (AAPP) activist group says at least 261 people have been killed in the harsh crackdown by security forces.

Three people were killed in Myanmar’s second city, Mandalay in unrest on Monday, including a teenage boy, witnesses and news reports said.

The junta has tried to justify the coup by saying a Nov. 8 election won by Aung San Suu Kyi’s National League for Democracy (NLD) was fraudulent – an accusation the electoral commission rejected. Military leaders have promised a new election but have not set a date and have declared a state of emergency.

Zaw Min Tun blamed protesters for violence and arson and said nine members of the security forces had been killed.

“Can we call these peaceful protesters?” he said, while showing a video of factories on fire. “Which country or organisation would regard this violence as peaceful?”

He said strikes and hospitals not fully operating had caused deaths, including from COVID-19, calling them “undutiful and unethical”.

The spokesman also accused media of “fake news” and fanning unrest and said reporters could be prosecuted if they were in contact with the CRPH, as the remnants of Suu Kyi’s government is known locally. The military has declared the CRPH an illegal organisation.

He gave granular details or how the NLD had created hundreds or even thousands of extra ballots in numerous townships by inventing voters, including in Suu Kyi’s own constituency. Videos of people saying they were paid by NLD representatives were shown at the news conference.

Suu Kyi, who won the Nobel Peace Prize for her campaign to bring democratic civilian rule to Myanmar, is being held in detention. Her lawyer says the charges are trumped up.

There were also more examples of demonstrations overnight staged without people in a bid to avoid becoming targeted by security forces trying to stamp out organised rallies.

In Hsipaw in Shan State the names of dead protesters written on cards were laid out next to candles with a sign reading “We spirits don’t want the junta”, DVB TV News reported.

Elsewhere, helium-filled balloons were released on Monday bearing messages calling for international help. Street protesters were replaced by toy cars or dolls, some led by cardboard cutouts or manikins dressed in outfits.

The European Union and the United States imposed sanctions on Monday against individuals involved in the coup and the repression of the demonstrators.

The EU sanctions were the bloc’s most significant response since the overthrow of Suu Kyi’s elected government on Feb. 1.

The 11 people it targeted included General Min Aung Hlaing, the commander-in-chief of the Myanmar military and head of the junta that has taken power.

The EU already has an arms embargo on Myanmar and has targeted some senior military officials since 2018.

German Foreign Minister Heiko Maas told reporters before the meeting that the military repression “has reached an unbearable extent”.

Stronger measures are expected soon as the bloc moves to take aim at businesses run by the military, EU diplomats said.

Washington had already sanctioned Min Aung Hlaing and the measures announced on Monday expanded the list.

U.S. Secretary of State Anthony Blinken said members of the 33rd Division had fired live rounds into a crowd in Mandalay. Both units were part of the security forces’ “planned systemic strategies to ramp up the use of lethal force”, he said.

There was no immediate response from the junta, which has shown no sign so far of being swayed by international condemnation of its actions.