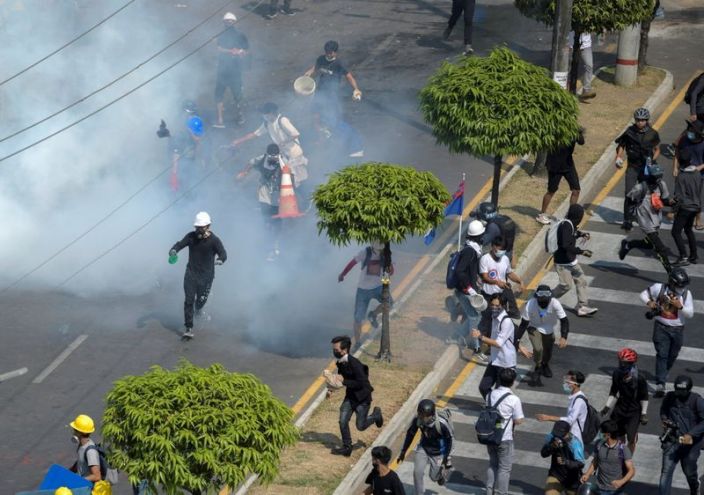 A Myanmar court filed two more charges against ousted leader Aung San Suu Kyi on Monday, a lawyer acting for her said, as protesters marched in defiance of a crackdown by security forces that killed at least 18 people the previous day.

Suu Kyi looked well as she took part in a court hearing via video conferencing in the capital, Naypyitaw, and she asked to see her legal team, lawyer Min Min Soe told Reuters.

The leader of the National League for Democracy (NLD) has not been seen in public since her government was ousted in a Feb. 1 military coup, when she was detained along with other party leaders.

“I saw A May on the video, she looks healthy,” the lawyer said, using an affectionate term that means “mother” to refer to Suu Kyi.

On Monday, a charge was added under a section of the colonial-era penal code prohibiting the publication of information that may “cause fear or alarm” or disrupt “public tranquillity”, Min Min Soe said.

Another charge was added under a telecommunications law, the lawyer said, which stipulates equipment needs a licence.

The next hearing will be on March 15.

Myanmar has been in chaos since the military seized power after alleging fraud in a November election won by Suu Kyi’s NLD in a landslide.

As Suu Kyi appeared in the video conference court hearing, police in the main city of Yangon used stun grenades and tear gas to disperse protesters, witnesses said, a day after the worst violence since the coup.

There were no immediate reports of any casualties on Monday but the previous day, police opened fire on crowds in various parts of the country killing 18 people, the U.N. human rights office said.

“We have to continue the protest no matter what,” Thar Nge said by telephone after police firing tear gas forced him and others to abandon a barricade in a Yangon street.

The military has not commented on Sunday’s violence and police and military spokesmen did not answer calls.

Earlier, police with water cannon and military vehicles were mobilised at protest hotspots in Yangon as crowds gathered to chant slogans.

Demonstrators marched in the northwestern town of Kale holding up pictures of Suu Kyi and chanting “democracy, our cause, our cause”.

Live video on Facebook showed a small crowd in hard hats gathered across a street in the northeastern town of Lashio, chanting slogans as police marched towards them. Protesters also marched in the central town of Bagan.

The coup, which brought a halt to tentative steps towards democracy after nearly 50 years of military rule, has drawn hundreds of thousands of demonstrators onto the streets and the condemnation of Western countries.

Tom Andrews, U.N. special rapporteur on human rights in Myanmar, said it was clear the junta’s assault would continue so the international community should ratchet up its response.

He proposed a global arms embargo, more sanctions from more countries on those behind the coup, sanctions on the military’s businesses and a U.N Security Council referral to the International Criminal Court.

“Words of condemnation are welcome but insufficient. We must act,” Andrews said in a statement.

“The nightmare in Myanmar that is unfolding before our eyes will get worse. The world must act.”

A committee representing lawmakers who won seats in the November election said at least 26 people were killed in the violence on Sunday, a tally Reuters was unable to verify.

In a post dated Feb. 28, the state-run Global New Light of Myanmar newspaper warned “severe action will be inevitably taken” against “anarchic mobs” that the military could not ignore, despite having previously shown restraint.

The Assistance Association for Political Prisoners said at least 270 people were detained on Sunday, from a total 1,132 it said had been arrested, charged or sentenced since the coup.

While some Western countries have imposed limited sanctions, the generals have traditionally shrugged off diplomatic pressure with support from China and Russia.

The junta has promised to hold a new election but not set a date.

At least 18 killed in Myanmar on bloodiest day of protests against ...