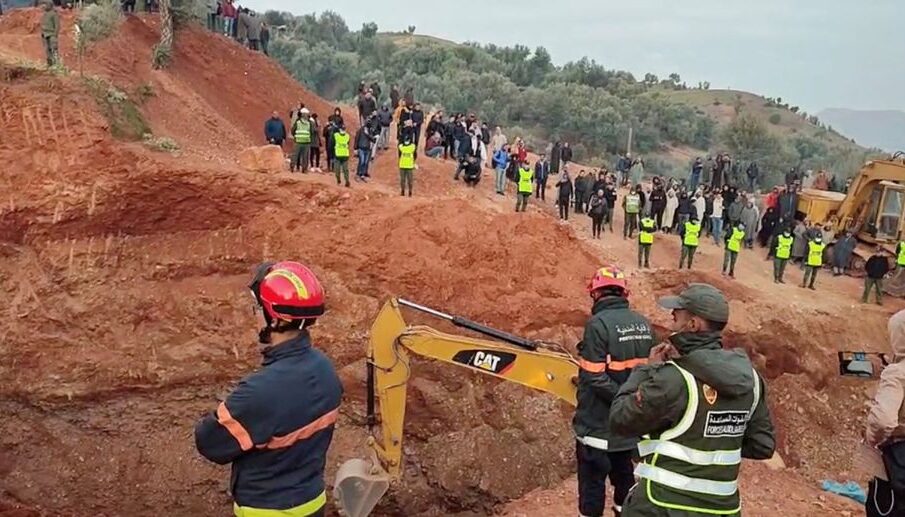 People use machinery to excavate the ground in order to free a boy trapped in an underground well, in Chefchaouen, Morocco, February 4, 2022, in this screen grab obtained from a social media video. AL3OMK.COM/via REUTERS

Moroccan rescue workers on Friday came closer to reaching a young child trapped at the bottom of a well in a delicate operation to dig out large parts of a hillside where there is a risk of landslide.

The five-year old boy, publicly identified only by his first name, Rayan, fell into the well in the northern hill town of Chefchaouen on Tuesday and his plight has gripped the North African country.

“I ask Moroccans to pray for the safe return of my son,” Rayan’s distraught mother said in footage shown on local media. State news outlet SNRT News quoted a rescuer on Friday saying the boy was still alive.

The well is 32 metres deep and narrows as it descends from its 45cm (18 inches) diameter at the top, which means the rescuers cannot go down themselves to retrieve the child.

The hilly region around Chefchaouen is bitterly cold in winter and though food has been lowered to Rayan, it was not clear whether he has eaten any. He has also been supplied with water and oxygen using a tube.

Rescuers have worked through the night with bulldozers to cut a massive trench into the hill next to the well leaving a gaping hole in the reddish earth.

Once they reach the same depth as the well the rescuers can start digging horizontally to save him, a witness told Reuters, confirming reports by local media.

One of the rescue team told local media on Friday: “We are preparing the most critical and most complicated rescue step … we need to dig horizontally three to five meters.”

“But to do so we have to stabilise the earth and remove the risk of landslide because we will deploy a rescue team and we cannot jeopardise their lives.“

A helicopter is standing by to ferry Rayan to hospital as soon as he is freed.