More than 100 dead in Myanmar jade mine landslide 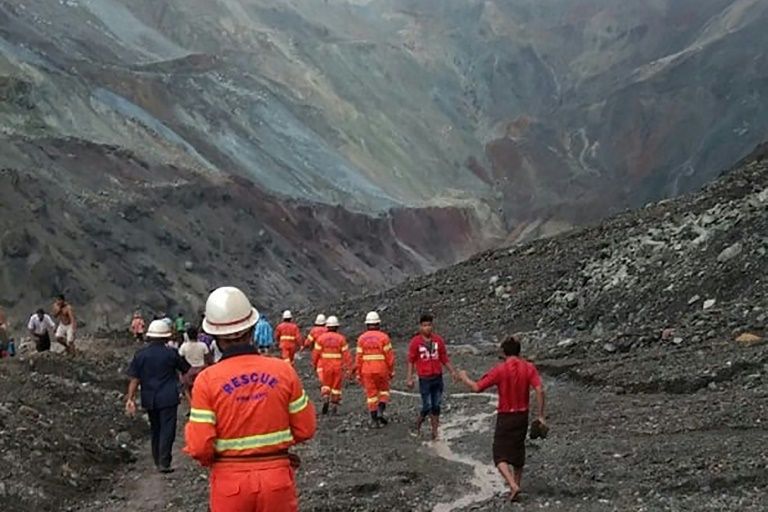 The bodies of at least 100 jade miners were pulled from the mud after a landslide in northern Myanmar on Thursday, in one of the worst ever accidents to hit the perilous industry.

Scores die each year while working in the country’s lucrative but poorly regulated jade industry, which uses low-paid migrant workers to scrape out a gem highly coveted in China.

The disaster struck after an early bout of heavy rainfall close to the Chinese border in Kachin state, the Myanmar Fire Services Department said in a Facebook post.

“The miners were smothered by a wave of mud,” the statement said. “A total of 113 bodies have been found so far.”

They had apparently defied a warning not to work the treacherous open mines during the rains, local police told AFP.

Rescuers worked all morning to retrieve the bodies from a mud lake, pulling them to the surface and using tyres as makeshift rafts.

Police told AFP that 99 bodies were found by noon, with another 20 injured.

They said search and rescue efforts had been suspended because of more heavy rains.

The workers were scavenging for the gemstones on the sharp mountainous terrain in Hpakant township, where furrows from earlier digs had already loosened the earth.

Photos posted on the fire service Facebook page showed a search and rescue team wading through a valley flooded by the mudslide.

Rescuers carried bodies wrapped in tarpaulins out of the mud lake as a deluge poured down from above.

Unverified footage of the scene showed a torrent of sludge crashing through the terrain as workers scrambled up the sharp escarpments.

Police said the death toll could have been even higher if authorities had not warned people to stay away from the mining pits the day before.

“It could have been hundreds of people dead — more than this, but the notice might have saved some,” superintendent Than Win Aung told AFP.

Open jade mines have pockmarked Hpakant’s remote terrain and given it the appearance of a vast moonscape.

Landslides in the area are common, especially when rainfall hammers the muddy terrain during Myanmar’s notoriously severe monsoon season.

The workers combing through the earth are often from impoverished ethnic communities who are looking for scraps left behind by big firms.

A mudslide buried more than 50 workers last year, when a days long recovery effort saw police digging through a “mud lake” to retrieve bodies from the sludge.

Myanmar is one of the world’s main sources of jadeite and the industry is largely driven by insatiable demand for the green gem from neighbouring China.

The mines are mired in secrecy, though Global Witness claims their operators are linked to former junta figures, the military elite and their cronies.

The watchdog estimated that the industry was worth some $31 billion in 2014, although very little reaches state coffers.

The fight to control the mines and the revenues they bring frequently traps local civilians in the middle.