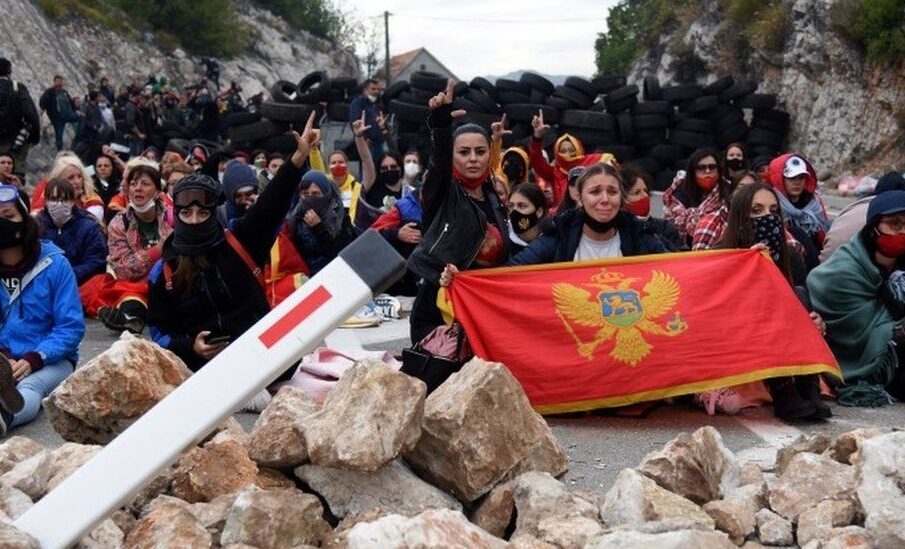 Protesters see the Serb Orthodox Church as a symbol of Serb influence. EPA

Police in Montenegro on Sunday dispersed hundreds of demonstrators who gathered in the historic city of Cetinje to block the inauguration of the new head of the Serbian Orthodox Church in the tiny Balkans nation.

Police fired tear gas at the protesters gathered on the main square, about 100 metres from a 15th century monastery where the new Metropolitan of Montenegro Joanikije is to be enthroned later on Sunday, state television reported.

The planned event has exacerbated ethnic tensions in the country, which broke away from Serbia in 2006.

While the Serbian Orthodox Church (SPC) is the dominant religion in Montenegro, critics accuse it of serving the interests of Belgrade.

And the government that assumed power at the end of the 2020 is accused by its opponents of being too close to the church.

But nearly a third of Montenegro’s 620,000 population identifies as Serb and some even refuse to acknowledge Montenegro’s independence.

Opponents of the inauguration set up barricades on Saturday to block access roads to Cetinje.

Demonstrators shouted “This is not Serbia!” and “Long live Montenegro!” on the main road linking Cetinje to the capital Podgorica on Saturday.

Many spent the night around fires they lit to keep warm, an AFP correspondent said.

The protesters hope to prevent SPC leaders, including its patriach Porfirije, from entering into the monastery, the SPC seat in the country but which is seen as a symbol of national identity by many Montenegrins.

But Joanikije and Porfirije arrived in front of monastery by helicopter Sunday, surrounded by police, images released by the daily Vijesti showed.

“I am here to show my love for the country,” said one protester, Saska Brajovic, 50.

“We are not asking for anything from anyone else, but we are dismissed by the occupying Serbian Church. We are here defending our dignity,” Brajovic, who spent the night at a barricade, told AFP.

The protesters are backed by the Democratic Party of Socialists (DPS) of President Milo Djukanovic.

Djukanovic had been eager to curb the SPC’s clout in Montenegro and build up an independent Orthodox church.

But in August 2020 elections the DPS lost — for the first time in three decades — to an opposition bloc led by SPC allies.

Prime Minister Zdravko Krivokapic, who is close to the Serbian Orthodox Church, has accused Djukanovic of having deliberately stocked the recent tensions.

Metropolitan Joanikije was named to his new post in May, after the death of his predecessor Metropolitan Amfilohije from Covid-19. He had run the church in Montenegro since 1990.