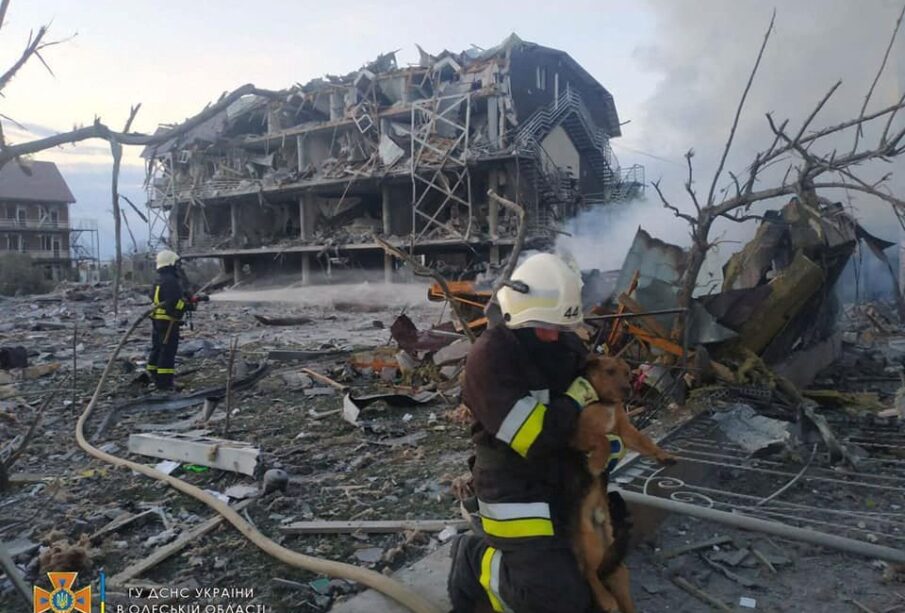 Emergency personnel work near a building damaged after a military strike, in Odesa, Ukraine, in this handout image released May 9, 2022. State Emergency Service of Ukraine/Handout via REUTERS

While Putin was silent about plans for any escalation, he exhorted Russians to battle and repeated his assertions that they were again fighting Nazis. His forces continued to destroy the infrastructure of the Azovstal steel plant in Mariupol where the last Ukrainian troops are holding out.

“You are fighting for the Motherland, for its future, so that no one forgets the lessons of World War Two. So that there is no place in the world for executioners, castigators and Nazis,” Putin said.

Ukraine’s President Volodymyr Zelenskiy, in his own speech on Monday, promised Ukrainians would triumph.

“On the Day of Victory over Nazism, we are fighting for a new victory. The road to it is difficult, but we have no doubt that we will win,” said Zelenskiy.

In Odesa, the major Black Sea port for exporting agricultural products, one person was killed and five people were injured when seven missiles hit a shopping centre and a depot, Ukraine’s armed forces said on Facebook.

Ukraine and its allies have intensified efforts on how to unblock ports or provide alternate routes for exporting its significant crops of grain, wheat and corn.

Air raid sirens could be heard across several regions of Ukraine early on Tuesday including Luhansk, Kharkiv and Dnipro.

Serhiy Gaidai, the governor of Luhansk, said the region was attacked 22 times in the 24 hours to early Tuesday.

“During the day on May 9th, the Russians fired en masse on all possible routes out of the region.”

Houses were destroyed in Sievierodonetsk and Lysychansk and in the village of Shypilovo, where people remained trapped, there was an attack on an inspecting crew that wounded one person, Gaidai added.

In the town of Bogodukhov, northwest of Kharkiv, four people were killed and several homes were destroyed in Russian attacks on Monday, local media quoted Kharkiv officials as saying.

Ukraine’s defence ministry said Russian forces backed by tanks and artillery were conducting “storming operations” at Mariupol’s Azovstal plant, where hundreds of Ukrainian defenders have held out through months of siege.

Mariupol lies between the Crimean Peninsula, seized by Moscow in 2014, and parts of eastern Ukraine under the control of Russia-backed separatists. Capturing the city would allow Moscow to link the two areas.

More than 5.5 million Ukrainians have fled their country since Russia’s invasion on Feb. 24, according to the United Nations, which has called it Europe’s fastest-growing refugee crisis since World War Two.

Moscow’s gains from the invasion, however, have been slow at best and it has little to show for it beyond a strip of territory in the south and marginal gains in the east.

U.S. President Joe Biden said he was worried Putin “doesn’t have a way out right now, and I’m trying to figure out what we do about that”.

Sources say U.S. Democratic lawmakers have agreed on a $40 billion aid proposal for Ukraine, including a massive new weapons package.

The White House had earlier described Putin’s remarks during his Victory Day speech as “revisionist history that took the form of disinformation.”

The Soviet victory in World War Two has acquired almost religious status in Russia under Putin, who has invoked the memory of the “Great Patriotic War” throughout what he calls a “special military operation” in Ukraine.

“There can be no victory day, only dishonour and surely defeat in Ukraine,” said British Defence Secretary Ben Wallace.

In Poland, the Russian ambassador was surrounded by protesters at a memorial ceremony and doused in red paint. Ambassador Sergei Andreyev, his face dripping and his shirt stained, said he was “proud of my country and my president”.

Sheltering in a metro station in Kharkiv – Ukraine’s mainly Russian-speaking second city which has been bombed relentlessly since the war’s first days – Kateryna Grigoriyevna, 79, sat eating an ice cream she had ventured out to buy for Victory Day.

“We hate Putin,” she said, glancing around the platform where some 200 people cluster in tents and on thin mattresses.

“I would kill him myself if I could.”