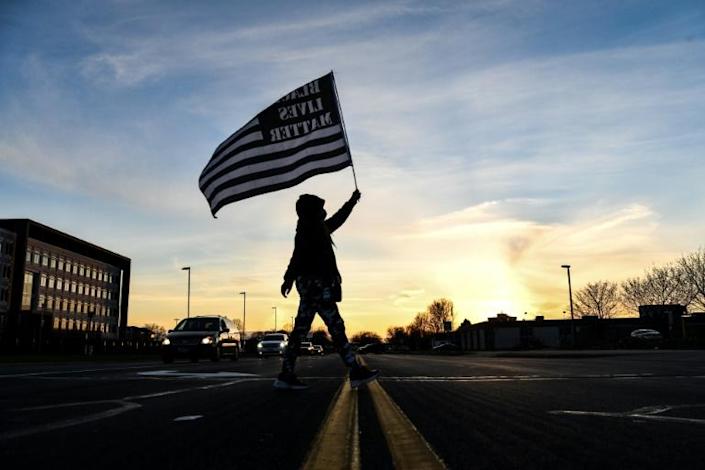 Minneapolis is bracing for fresh unrest as the closely watched trial of the police officer accused of killing George Floyd enters its final phase. AFP

Janay Clayton has no doubt there will be trouble in Minneapolis if the white ex-police officer accused of murdering George Floyd walks free — with soldiers patrolling the streets and shops boarded up in anticipation of a verdict.

“We’re prepared for the worst,” Clayton, a resident of the US city, told AFP on Monday, at the start of the trial’s fourth week.

The 62-year-old warned there could be fresh protests if Derek Chauvin is acquitted for Floyd’s death. The former officer was captured on video kneeling on the 46-year-old Black man’s neck for nine and a half minutes last May.

Clanton is not the only person to be worried: emotions — and tensions — are running sky high in the Midwestern city, which has become synonymous with huge protests against racial injustice and police brutality that last year ignited a nationwide reckoning.

The downtown courthouse where Chauvin awaits the jury’s verdict is surrounded by skyscrapers whose doors and windows are boarded up, while the court itself is protected by armored military vehicles and 10-foot concrete walls, as the jury retires to deliberate on Chauvin’s fate after hearing closing arguments.

Traffic has been diverted away from police precincts, which were targeted in violent demonstrations last year.

“I live downtown and we’re all quite concerned about the outcome of the trial,” Clanton said. “You can see by walking through downtown.”

Anything short of a guilty verdict, and the city — where a few last winter snowflakes were still falling Monday — could erupt with new violence.

“I think there’ll be riots” if Chauvin is found not guilty, said surgeon Pouya Hemmati, 31. “I think people will be very upset.”

“Everybody saw somebody put his knee on his neck for 9.5 minutes,” he added. “I hope that he is convicted of what was very clearly a murder and excessive police brutality.”

The police veteran, who has pleaded not guilty, faces a maximum of 40 years in prison.

But a conviction on any of the charges — second-degree murder, third-degree murder or manslaughter — will require the jury to return a unanimous verdict.

As a deterrent to any potential rioting or looting, the state has deployed around 3,000 members of the Minnesota National Guard alongside police in what it dubbed “Operation Safety Net.”

But in a sign of how tense the city is, before dawn on Sunday, shots were fired at a group of National Guard soldiers from a car that then fled the scene. Two soldiers suffered only superficial injuries from flying glass.

Minnesota Governor Tim Walz told a local TV station he had spoken to the injured guardsmen.

“They are OK,” he said. “But it highlights how dangerous the situation can get.”

Maxine Waters, a veteran Black Democratic member of Congress from California who has set up camp in Minnesota, has been accused by Republicans of fanning the flames after calling for people to stay in the streets and vowing she would “continue to fight in every way that I can for justice.”

For some residents, Minnesota’s legal history in cases involving police officers increases the likelihood of a not guilty verdict.

“The only time we did see (a police officer) convicted, they were a person of color. So you know in this situation being that I am a person of color, I’m not expecting any results,” said Ashley Commodore, a singer.

“I don’t think (he will be convicted) and I think that the city is kind of preparing for that to happen,” the 33-year-old added, pointing to the presence of the National Guard.

Anxiety — and scrutiny of the trial — has only increased after the fatal shooting of 20-year-old Daunte Wright by a white policewoman in a nearby suburb on April 11. Four days later, Chicago police released body-camera footage that showed the killing of 13-year-old Adam Toledo, igniting another round of protests.

“I think that what we saw last year in terms of riots and push back is going to be doubled, if not tripled,” Commodore said.

Still, she holds out hope “this will really fuel change.”