The Times of Earth, International Edition
0
562 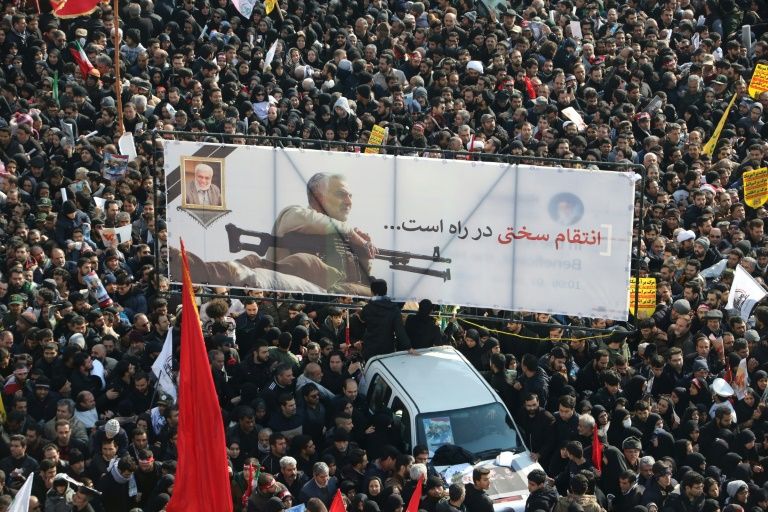 Downtown Tehran was brought to a standstill Monday as mourners flooded the Iranian capital to pay an emotional homage to Qasem Soleimani, the “heroic” general killed in a US strike.

Young and old were packed shoulder-to-shoulder in the streets, including women dressed in black-clad chadours and others wearing loose-fitting hijabs.

Soleimani, one of Iran’s most popular public figures, was killed in a US drone strike on Friday near Baghdad international airport. He was 62.

His assassination drove up tensions between arch-enemies Washington and Tehran, which has vowed “severe revenge”.

“He was a hero. He defeated Daesh,” said a woman in her 30s, referring to the Islamic State group.

“What America did is definitely a crime,” said the woman who only gave her surname as Mohammadi.

“I’m here to mourn his martyrdom. There must be a response but we don’t want war. Nobody wants war,” she told AFP.

State television said it was a “several million-strong” turnout.

Supreme leader Ayatollah Ali Khamenei, who has vowed “severe revenge” for the US attack, presided over prayers for the slain general.

He appeared to cry beside the flag-draped coffins containing the remains of Soleimani and five other “martyrs” killed in the strike.

The streets of Tehran were so full of people that many were unable to emerge from underground metro stations, semi-official news agency ISNA reported.

“There are large crowds at metro stations but as there is also a huge crowd at the street level, it isn’t possible to evacuate passengers,” metro chief Farnoush Nobakht was quoted as saying.

The sheer number of mourners left many people stuck in sidestreets around Enghelab (Revolution) Street, the main route of a procession to a ceremony at Tehran University.

It was silent in one alley until a child who climbed a tree to see if the street ahead had opened uttered “Death to America”.

People within earshot soon joined in and loudly chanted the same phrase.

Chants of “Death to infidels,” “Death to seditionists” and “Death to al-Saud” — a reference to the Saudi ruling family — were then heard.

But most of the anger was directed at Tehran’s arch-enemy Washington and US President Donald Trump.

One man said he had come to the capital with his wife and child before dawn from Karaj, a city about 40 kilometres (25 miles) west of the Iranian capital.

“Our message to America is we will hit you. We’ll make you pay for the blood you spilled,” said Mehdi Ghorbani.

“America should know they started this, but we will end it,” he told AFP.

A group of teenagers stood in a circle holding banners, one reading: “Haj Qasem’s shoe is worth more than Trump’s head”.

Other mourners called for US forces to be driven out of the region.

“We must give a crushing response,” one of the mourners told AFP.

“We must target whatever military base they have in the region. We must attack all that are in the range of our missiles,” said the 61-year-old businessman who gave his name as Afkhami.

“Americans being thrown out (of Iraq) is not enough.”