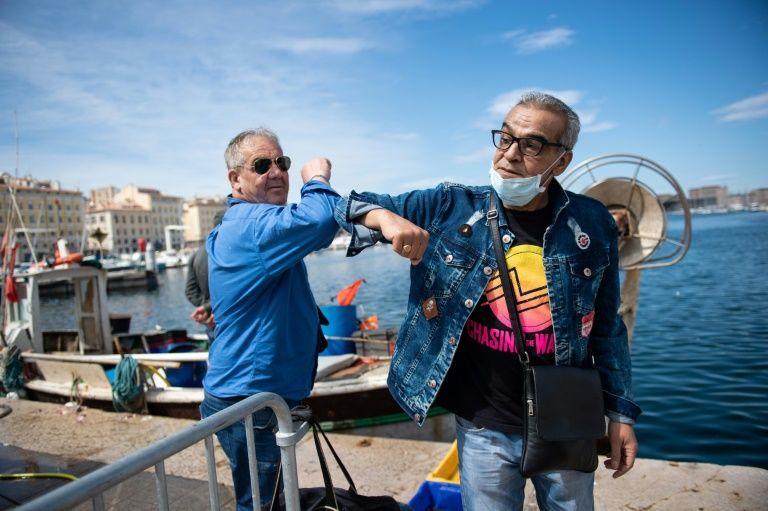 To greet friends and acquaintances by kissing, hugging and shaking hands is considered part of the essence of Mediterranean identity.

But the coronavirus pandemic has put an abrupt end to such rituals with no indication of when it will be safe to resume them.

Fisherman Daniel Reggio used to hail friends and colleagues with the traditional “bise” or cheek-kissing when he bumped into them in the southern French port city of Marseille.

Since the spread of COVID-19, he has resorted to elbow-bumping.

“We can’t say we don’t miss it, but going without isn’t going to end friendship or complicity,” said Reggio, as he sold sea bream in Marseille’s historic Old Port area.

Pensioner Yvon Tapias organises walking tours in Marseille. He now greets people with the “Wuhan shake”, a foot greeting that harks back to the Chinese city where the novel coronavirus first appeared.

“We touch each other with our soles,” he said, pointing to the inside of his foot.

“We like to kiss each other two, three, four times, depending on the region. It’s very weird to say hello like this now.”

Even men normally greet each other with the “bise” in Marseille.

“It’s where I first kissed executives. I had never had the idea of kissing a banker before!” said the director of Marseille’s acclaimed Museum of Civilizations of Europe and the Mediterranean, Jean-Francois Chougnet, who arrived from Paris a few years ago.

Further west along the Mediterranean coast, people from Montpellier are even greater fans of the bise. Each greeting leads to three enthusiastic cheek kisses.

“We really miss it. It’s gut-wrenching every time we have to stop ourselves,” student Melodie Ricaud said, adding that she now hesitates between a distant hand gesture and the Indian greeting “namaste” where both hands are brought together in front of the chest.

“I do the sign that my Moroccan grandmother did, with the right hand on the heart and an intense gaze so that they feel my affection,” she said.

Physical proximity is also an essential component of social interactions on the other side of the Mediterranean in Tunisia and Algeria.

“The physical relationship is very important in Algeria. We touch a lot, we’re very warm and expressive through our gestures,” said Nacer Djabi, professor of sociology at the University of Algiers.

“Hugging and kissing are a sign of kindness and acknowledgement,” added prominent Tunisian sociologist Mohamed Jouili.

For French anthropologist Genevieve Zoia, “our Mediterranean identity is based on physical closeness”.

Heavy death tolls in Italy, Spain and France from COVID-19 have transformed these traditional mannerisms, integral to the Mediterranean way of life.

“Fear of the virus comes before everything, even in a skin against skin country like Spain,” said Spanish psychologist Javier Urra.

But getting used to these changes can be difficult. “Our behaviour is a habit,” said Urra.

“In Spain we have been told since childhood: ‘Give that person a kiss’. And suddenly the order is: ‘Do not touch anyone’. It is almost unnatural,” said the psychologist Urra.

The widespread use of masks might be an even bigger break with tradition than not kissing or shaking hands, said Chougnet. “In our society wearing a mask is very unnatural,” he added.

The virus has “traumatised” people, said Manuel Armayones, lecturer in psychology at the Universitat Oberta de Catalunya in Barcelona.

“We are generating a new social norm in response,” he added.

“We are seeing a greater capacity to express emotions.”

On the shore in Marseille, Fisherman Daniel Reggio said wearing mask has taught him to smile with his eyes. “And we add words to compensate for gestures we can no longer do, like ‘friend’ and ‘brother’,” he said.