Mayor of Canadian-U.S. border city says protesters could be removed by force

The Times of Earth, International Edition
0
446 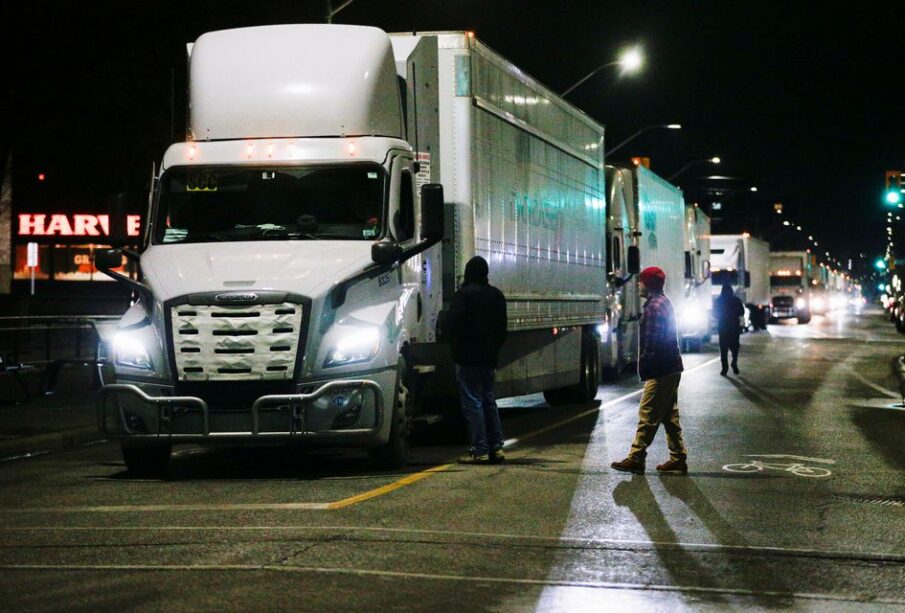 Trucks are backed up after protestors shut down the last entrance to the Ambassador Bridge, which connects Detroit and Windsor, as the protest against the coronavirus disease (COVID-19) vaccine mandates continues, in Windsor, Ontario, Canada February 9, 2022. REUTERS/Carlos Osorio

A Canadian mayor said on Thursday police were prepared to physically remove anti-coronavirus mandate protesters who have blocked a vital U.S.-Canada trade route and forced automakers in both countries to reduce operations.

The closure of the Ambassador Bridge, one of the busiest border crossings in North America and a supply route for Detroit’s carmakers, has U.S. and Canadian officials scrambling to find alternate routes to limit any economic damage.

Canadian truckers started the protests as a “Freedom Convoy” occupying the capital, Ottawa, opposing a vaccinate-or-quarantine mandate for cross-border drivers mirrored by the U.S. government. They began blocking the Ambassador Bridge on Monday and have since shut two smaller border crossings.

Dilkens later told a press conference that he was striving to resolve the issue peacefully and ensure nobody gets hurt.

“(While) it may be gratifying for someone to see the forced removal of the demonstrators, such action may inflame the situation and certainly cause more folks to come here and add to the protest, and we don’t want to risk additional conflict,” Dilkens said.

With traffic at times shut in both directions, General Motors Co (GM.N) and Chrysler-parent Stellantis (STLA.MI) said on Thursday they had to cancel or reduce shifts because of parts shortages, tacking on to earlier cuts announced by Ford Motor Co (F.N) and Toyota Motor Corp. (7203.T)

Toyota said it was suspending production through Saturday at its plants in Ontario and Kentucky, affecting manufacturing of the Camry, RAV4 and other popular models.

The Ambassador Bridge was completely shut down in both directions on Thursday at 3:15 p.m. EST (2015 GMT), according to a Reuters witness.

Canadian Prime Minister Justin Trudeau said he was working with municipal leaders to do what was necessary to end the bridge blockade.

The shutdown has hurt “regular Canadians whether it’s grocery store prices, whether it’s jobs lost or suspended, whether it’s supply chains disrupted. This is hurting communities across the country,” Trudeau told reporters.

Public Safety Minister Marco Mendicino said federal police forces would be deployed to Windsor, near the bridge, and to Ottawa. Protesters began gathering with their vehicles there nearly two weeks ago and have occupied the main downtown street that runs by parliament, the Bank of Canada and the prime minister’s office.

Ottawa police said 25 people have been arrested on criminal charges.

Some protests inspired by the Canadian truckers and their supporters have take place in Australia, New Zealand and France as the highly infectious Omicron variant of coronavirus begins to ease in some places.

White House economic adviser Brian Deese told MSNBC that U.S. President Joe Biden’s administration was “working in real time to divert cargo – that’s an imperfect solution – either by rail or by other bridges or by water”.

Deese said that while Washington supports legitimate, peaceful protests, “taking steps like this that do nothing but hurt the economy, hurt families who are just trying to make a living … really make no sense.”

More than two-thirds of the $511 billion in goods traded annually between Canada and the U.S. is transported by road. Protesters blocked a second crossing in Alberta province late on Tuesday, and a third crossing between Manitoba province and North Dakota on Thursday.

“It would be significant if there is any length of time that it’s shut down.”

Seeking to show support for the Canadian protesters, some U.S. truckers said they will send two convoys this weekend to a fourth border crossing that connects Buffalo, New York, and Fort Erie, Ontario.

“They will bring supplies to truckers and supporters to help them peacefully assemble in celebration of freedom,” the Convoy to Save America said in a statement.