‘May Allah remove the virus’: Pandemic a grim addition to Afghanistan’s woes

The Times of Earth, International Edition
0
588 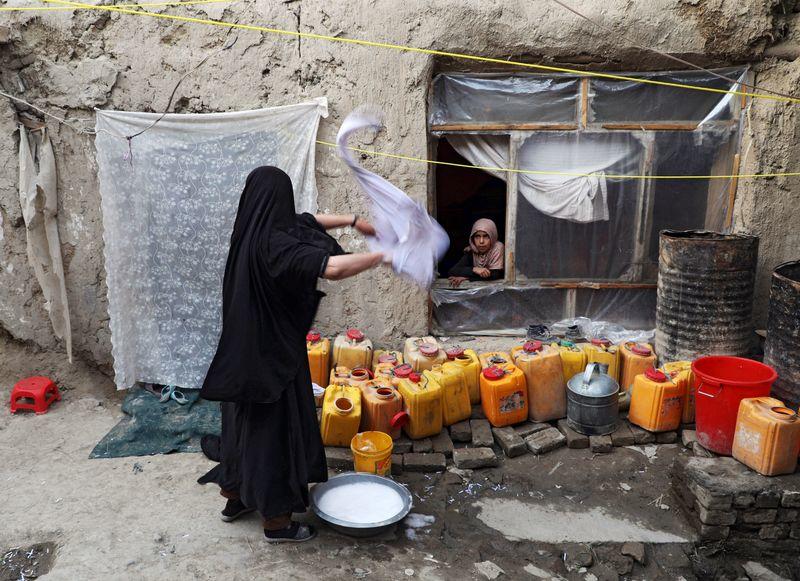 Delkhah Sultani, 30, an Afghan widow who lost her husband in a suicide attack almost six years ago, washes clothes as her daughter looks on in Kabul. REUTERS

Delkhah Sultani scrubs laundry outside her home in Kabul as her young daughter watches on. She says she once got paid around $3 a day to wash clothes for other households but since the coronavirus outbreak hit, work has dropped and she now earns $1 every few days to support her and her four children.

Like millions of Afghans, Sultani is facing economic distress and hunger from two disasters – the pandemic and the damage from decades of civil war.

“Since the beginning of the holy month of Ramadan (in late April), I have not been able to find jobs for myself because people don’t invite me to their homes to wash their clothes anymore due to the fear of the coronavirus,” said Sultani. She said her husband was killed six years ago in a suicide bomb attack.

“I don’t have money to take my son to the barbershop or buy food. Most of the time, we don’t even have anything to eat to break our fast.”

At least 6,000 people have been infected by the coronavirus in Afghanistan and 153 have died, straining the country’s weak health infrastucture. Officials warn that the actual number of infections is likely to be much higher because few people have been tested.

“We are facing increasing needs across the country and this pandemic is expected to severely impact the livelihoods of communities across the country for years to come,” said Parvathy Ramaswami, deputy country director at the World Food Programme Afghanistan.

The coronavirus pandemic that has derailed even the world’s top economies is hitting Afghanistan as the government faces the prospect of a fiscal crunch and reinvigorated Taliban insurgents. Despite an ongoing peace process being brokered by the United States, attacks are taking place daily.

“There is a conflict…and with everything happening at once an already weak state is going to have less time and energy to do even basic policing,” said Andrew Watkins, senior Afghanistan analyst at the International Crisis Group.

The stepped-up violence and a harrowing attack on a Kabul maternity ward, suspected to have been conducted by Islamic State this week, prompted the government to switch the military to an ‘offensive’ stance.

The United States is drawing down troops in Afghanistan under its deal with the Taliban and foreign donors consumed with their own pandemic bail-out packages are expected to have less to spend on aid.

Aid pledges made in 2016 run out this year and one diplomat said Afghanistan was headed for disaster if replenishments fell short.

Grants make up roughly 75% of the Afghan government’s expenditure and any government revenue that comes from taxes is at serious threat as the pandemic hits the economy.

Government revenues have already fallen by almost a quarter in the first four months of the fiscal year compared to the same period last year, according to economic think tank the Biruni Institute.

Omar Joya, head of research at the institute, said the think tank was projecting an additional 8 million people could fall into poverty this year, pushing the poverty rate from 55% to 80%.

The government has been ramping up distribution of food aid, and in Kabul more than 250,000 families have started receiving free food, including Sultani. She says making it last is a stretch.

“Most of the time, we don’t have even a loaf of bread at home for my kids to eat,” she said. “May Allah remove the virus, so the needy people can live a normal life.”