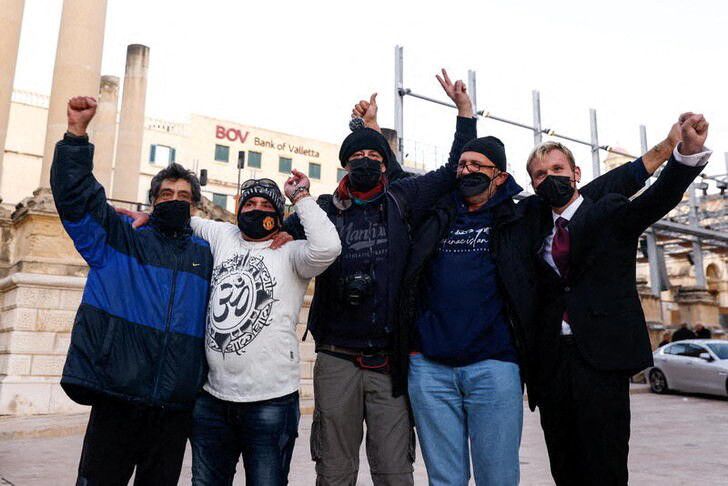 Supporters of the bill to legalise cannabis for personal use celebrate outside Parliament House after the bill was passed, in Valletta, Malta December 14, 2021. REUTERS/Darrin Zammit Lupi

Malta became the first European country to allow limited cultivation and possession of cannabis for personal use, following a vote in parliament on Tuesday.

Luxembourg announced similar plans in October but its parliament has yet to give its green light to the measure.

The law, which was approved by 36 votes to 27, allows adults in Malta to possess up to seven grams (0.25 oz) of cannabis and grow up to four plants.

The bill was promoted by Equality Minister Owen Bonnici, who says Malta has adopted a “harm-reduction approach” with the establishment of an authority to regulate the sale of cannabis for personal use by adults from non-profit associations.

Smoking cannabis in public will remain against the law and anyone caught consuming cannabis in front of a child will be liable for fines of between 300 and 500 euros ($340-$564).

The legislation was rushed through parliament in the face of fierce criticism from the centre-right opposition, medical associations and the church who complained that their requests to water down the proposals were ignored.

Bonnici has rejected suggestions that the law will increase drug abuse on the Mediterranean island.

“The government is in no way urging adults to resort to cannabis use or promoting a cannabis culture. The government always urges people to make healthier choices,” the minister wrote in an op-ed in the Sunday Times of Malta newspaper.

The Netherlands also has a liberal attitude towards cannabis, allowing the sale of small quantities in a policy aimed at managing crime and health risks, though officially it is illegal.