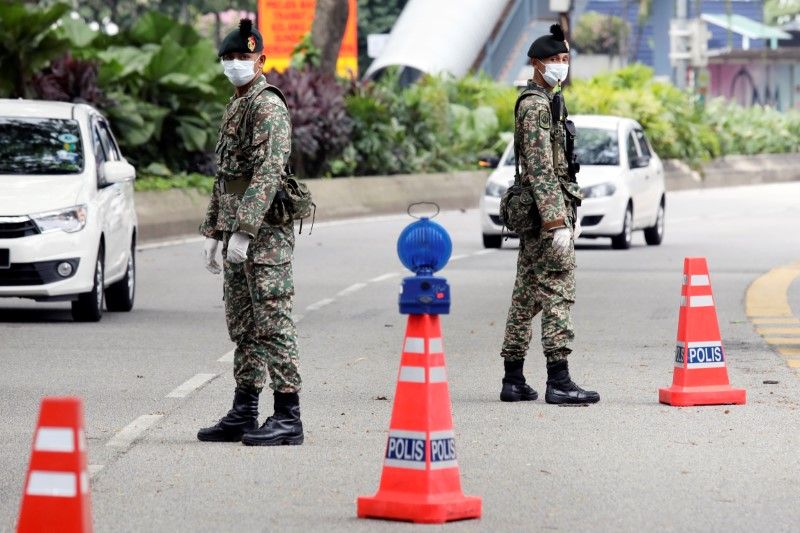 Malaysia deployed the army on Sunday to enforce a two-week curb on travel on a country that has Southeast Asia’s highest number of coronavirus cases, most of them linked to a mass religious gathering held late last month.

The virus has so far infected more than 3,460 people across Southeast Asia, with 86 deaths, more than half of them in the region’s most populous country, Indonesia.

After Malaysia imposed stringent travel restrictions on Wednesday in the face of an upsurge in cases, Singapore and Vietnam both announced bans on foreigners entering the countries, with cases brought from outside on the rise.-

Troops joined police manning roadblocks and carrying out patrols in Malaysia to ensure full compliance with some of the tightest movement restrictions in the region.

“Even though police have said compliance is 90% now, 10% is not a small number,” Minister of Defence Ismail Sabri Yaakob said.

About 63% of Malaysia’s 1,306 cases are linked to a Feb. 27-March 1 Islamic gathering at a mosque near the capital Kuala Lumpur attended by people from more than two dozen countries.

The health ministry said 11,000 of an estimated 14,500 Malaysian attendees has been found and 6,700 had been tested, but it was trying to track the rest.

The person who brought the infection may have been from overseas, he said. Some 1,500 participants were from abroad.

The number of cases has risen sharply across Southeast Asia this month. Indonesia announced 10 more deaths – bringing the total number there to 48. In the Philippines, the death toll rose by six to 25.

With widespread anticipation of a surge in cases, Indonesia has turned its “Athlete’s Village” built for the 2018 Asian Games into an emergency hospital with a capacity to hold more than 4,000 patients.

Indonesia’s rate of testing has been far below that of neighbours, leading to suspicions it has far more cases than reported.

As of Friday, Indonesia had tested 1,898 people or around seven tests per one million people. Singapore said it had carried out tests on 25,000 people by Friday – about 4,500 tests per million people.

Singapore said it would not allow any short-term visitors to transit or enter the city-state. Vietnam also barred entry for all foreigners from Sunday, except for special cases.

In another measure, Vietnam closed the mausoleum for revolutionary leader and founding president Ho Chi Minh.

With cases in Thailand jumping by 188 – the most in a single day – authorities urged workers not to flee Bangkok for their home towns after further restrictions were announced at the weekend on businesses and shopping malls.

People thronged one bus station to leave the city.

Many of the cases in Thailand have been linked to a boxing stadium and entertainment spots – which have now been ordered to shut.

“Most of the new cases were found in Bangkok and were among young people who continue to have social activities, which can lead to more infections,” Taweesin Wisanuyothin, a Public Health Ministry spokesman, told a news conference.