The Times of Earth, International Edition
0
690 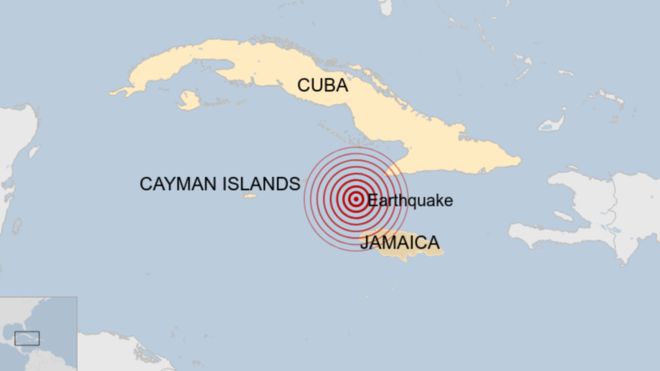 A major 7.7 magnitude quake struck Tuesday in the Caribbean northwest of Jamaica, the US Geological Survey reported, raising the risk of tsunami waves in the region.

A major 7.7 magnitude quake struck Tuesday in the Caribbean northwest of Jamaica, the US Geological Survey reported, raising the risk of tsunami waves in the region.

The US agency said the quake hit at a depth of 10 kilometers (six miles), at 1910 GMT — 125 kilometers northwest of Lucea, Jamaica.

The USGS estimated there was low likelihood of casualties or damage, and there were no immediate reports of either.-

The Kingston-based Jamaica Observer newspaper said the quake was felt across much of the island, lasting for several seconds.

Jamaicans took to social media in the immediate aftermath to post pictures, unverified by AFP, of swimming pools shaking violently while locals said buildings had been evacuated.

It also felt in nearby Cuba, according to initial reports.

The Pacific Tsunami Warning Center in Hawaii said that based on preliminary readings, “hazardous tsunami waves are possible for coasts located within 300 kilometers of the earthquake epicenter.”

A powerful magnitude 7.7 earthquake struck the western Caribbean on Tuesday, triggering evacuations as buildings shook across the Cayman Islands, in Jamaica, and in downtown Miami, but with no initial reports of significant damage.

The epicenter of the quake was in the sea between Jamaica, the Cayman Islands and Cuba, at a shallow depth of 6.2 miles (10 km).

The International Tsunami Information Center said an earlier threat of a tsunami wave had largely passed. Minor sea level fluctuations up to 1 feet (30 cm) were still possible, it said.

In Miami, Florida, several buildings downtown had groups of people standing outside who said they had been evacuated.-

“As of now, there are no injuries or structural damages. Residents/visitors are advised to stay calm,” the department said on Twitter.

Officials across the region had no initial reports of major damage, despite the size of the quake.

Angie Watler, a spokeswoman for police on Cayman Brac, the island nearest the epicenter of the quake, said members of the public had reported some damage to buildings and to a swimming pool at the Carib Sands resort on the south of the island.

Videos on social media, apparently from Jamaica and the Cayman Islands, showed water sloshing out of pools during the quake.

Watler said there were no reports so far of injuries but that authorities were still making checks on the area.

A Cayman Islands official said there had been some reports of sinkholes following the quake.

The quake was also felt in several provinces across Cuba, the government said. It was not strongly felt in the capital of Havana, according to a Reuters witness.

The Pacific Tsunami Warning Center in Hawaii said that based on preliminary readings, “hazardous tsunami waves are possible for coasts located within 300 kilometers of the earthquake epicenter.”

Israel headed for clash with ICC over West Bank settlements