The Times of Earth, International Edition
0
675 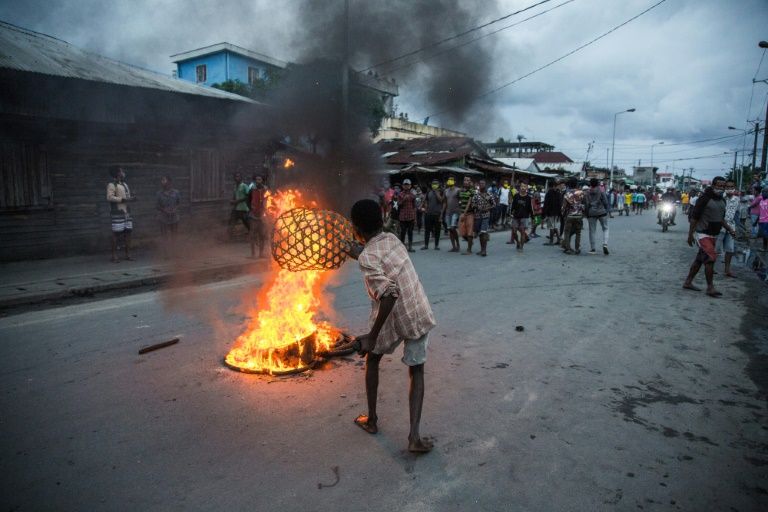 Scuffles broke out between Madagascar police and protesters on Wednesday as citizens took to the streets in the eastern town of Toamasina to denounce anti-coronavirus lockdown measures.

Tensions flared after a police officer allegedly beat a street vendor accused of breaching an afternoon ban on commercial activities, according to an AFP reporter at the scene.

Pictures of the man lying on the ground were shared on social media, sparking anger among the town’s residents.

Police denied committing any form of violence and claim the street vendor had returned home after a brief hospital visit.

“The mobs are still continuing and security forces are restoring order,” they said in a statement on Wednesday night.

Madagascar’s government sent troops and doctors to Toamasina last week after two people died from coronavirus and the number of cases spiked.

The Indian Ocean island nation has registered around 900 infections to date and six deaths — all of which were recorded in Toamasina.

The soldiers were dispatched to maintain order and enforce measures against coronavirus, such as wearing face masks and maintaining social distance.

“Coronavirus does not exist here, the state is manipulating us,” the protesters shouted.

“We are going to show these soldiers from (the capital) Antananarivo what we are made of,” they said.

Hours before the clashes, a town collective took to social media to denounce President Andry Rajoelina’s decision to send troops as well as his response to the pandemic — demanding he step down within 12 hours.

“I do not understand, there is no war here,” Toamasina waitress Teodety Raharimamy complained.

“We are fighting an invisible virus, and they are sending out the military rather than doctors.”

Rajoelina imposed a lockdown on Madagascar’s three main cities at the end of March to try and contain the spread of infection.

Restrictions have been gradually lifted in Antananarivo and in the southeastern city of Fianarantsoa, but Toamasina residents remain under confinement.

Meanwhile, authorities across the island have been handing out a herbal tea touted by the president as a powerful remedy against COVID-19.

The potential benefits of the drink, called Covid-Organics, have not been validated by any scientific study.