The Times of Earth, International Edition
0
419 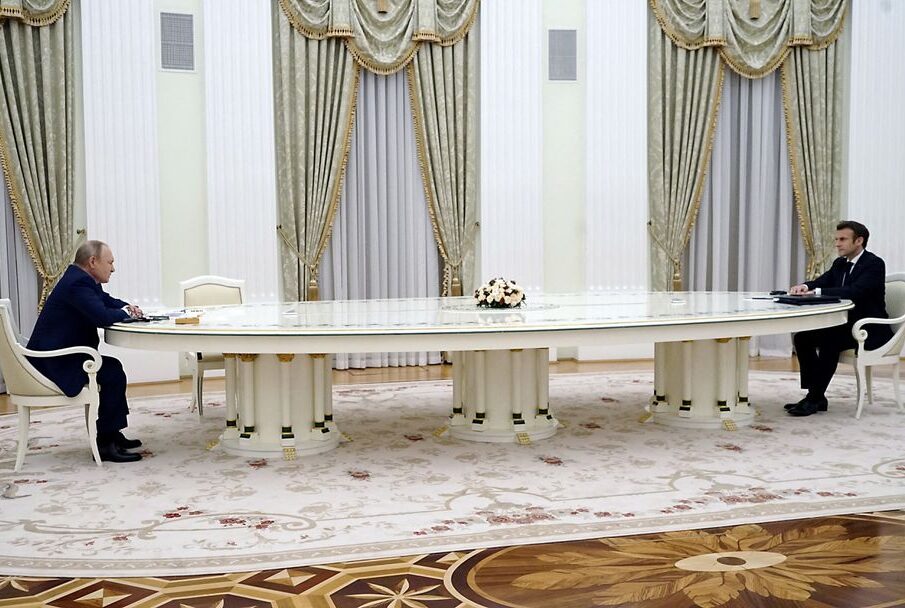 French President Emmanuel Macron, the top Western leader to visit Moscow since Russia began massing troops on the border with Ukraine, told Vladimir Putin at the start of talks in the Kremlin on Monday that he aimed to avoid war and build trust.

Macron, who is expected to seek re-election in April, has positioned himself as a potential mediator on Ukraine, with Paris voicing scepticism about predictions by Washington and other Western capitals that a Russian assault is imminent.

Macron told the Russian president he was seeking a “useful” response “that of course allows us to avoid war and to build bricks of trust, stability, visibility”. Putin, for his part, said Russia and France shared “a common concern about what is happening in the security sphere in Europe”.

“I see how much efforts the current leadership of France and the president personally is applying in order to solve the crisis related to providing equal security in Europe for a serious historical perspective,” Putin said.

On the eve of his trip, Macron, who is also due in Kyiv on Tuesday, told the Journal du Dimanche newspaper: “The geopolitical objective of Russia today is clearly not Ukraine, but to clarify the rules of cohabitation with NATO and the EU.”

On his arrival, Macron told reporters: “I’m reasonably optimistic but I don’t believe in spontaneous miracles.”

Kremlin spokesperson Dmitry Peskov said ahead of the talks: “The situation is too complex to expect decisive breakthroughs in the course of one meeting.”

In Washington, U.S. President Joe Biden said as he hosted German Chancellor Olaf Scholz that they were “working in lockstep” to address the crisis.

Russia has deployed more than 100,000 troops near Ukraine’s borders. It denies planning an invasion, but says it is ready to take unspecified “military-technical measures” if its demands are not met, including a promise by NATO never to admit Ukraine and to withdraw some troops from Eastern Europe.

Washington has rejected those demands but says it is willing to talk about arms control and confidence-building steps, which Moscow says are beside the point.

“In recent days there has been nothing new on the topic of security guarantees for Russia. Our Western interlocutors prefer not to mention this topic,” Peskov said.

The United States and its allies have ruled out defending Ukraine with military force but say they would respond to any invasion with sanctions, arms shipments and reinforcement of NATO countries nearby.

Last week Biden ordered nearly 3,000 U.S. troops to deploy in Poland and Romania to better protect NATO’s eastern flank. A U.S. general arrived in Poland on Saturday and the bulk of the new forces due there were expected on Monday.

Germany announced on Monday it would deploy 350 troops to Lithuania to reinforce a NATO battle group there.

Russian-backed separatist leaders in eastern Ukraine warned that a full-scale war could break out there and urged Moscow to send 30,000 soldiers to reinforce rebel forces. Kyiv says 15,000 people have been killed in fighting between government forces and separatists in the breakaway Donetsk region since 2014.

In London, a spokesman for British Prime Minister Boris Johnson said Russian concerns about potential NATO aggression were “fundamentally unfounded as NATO is a defensive alliance at its heart”. He said Britain wanted to work with Moscow to provide it with reassurance on that point.

Russia sees NATO’s addition of 14 new east European members since the Cold War ended three decades ago as an encroachment on its sphere of influence and a threat to its security.

Ukrainian officials have publicly criticised Berlin for refusing to sell defensive weapons to Kyiv and over its perceived reluctance to stop gas flowing through the Nord Stream 2 gas pipeline from Russia if Moscow launches an attack.

Ukrainian Foreign Minister Dmytro Kuleba said “a frank conversation” with Baerbock about weapons had found “both common ground and a draft solution” but did not give details.

Germany has ruled out sending lethal weapons for historical reasons arising from its role in the 20th Century world wars. Kyiv’s mayor last month derided an offer of 5,000 military helmets as “a joke”.

Biden, a long-time opponent of Nord Stream 2, will make clear in his meeting with Scholz that the pipeline will not move forward if “Russia invades Ukraine in one way or another”, a U.S. official said.

Secretary of State Antony Blinken said meanwhile the United States and European Union were working to protect European energy supplies against shocks stemming from the crisis.

Scholz, who took office after 16 years of Angela Merkel’s leadership, has been criticised for showing insufficient leadership in the crisis.

He told reporters the West would act swiftly, decisively and in unity if Russia invades Ukraine, adding: “There will be a very high price to pay if Ukraine is attacked militarily.”