The Times of Earth, International Edition
0
784 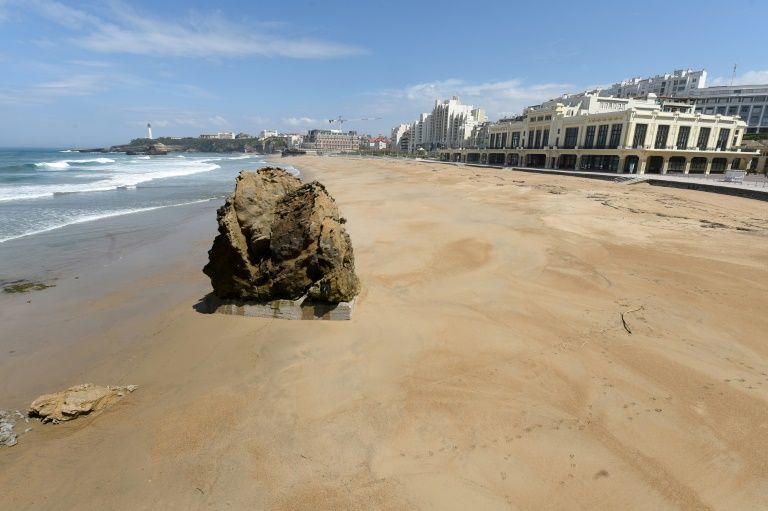 The empty Grand Plage, one of the most beautiful beaches in Biarritz, southwestern France, on the twenty-eighth day of a coronavirus lockdown which President Emmanuel Macron said will be extended until May 11, 2020 (AFP Photo/GAIZKA IROZ)

France’s lockdown to contain the coronavirus outbreak will be extended until May 11, President Emmanuel Macron said on Monday, but added that the restrictions could start to be eased from then if current positive trends continued.

While giving France a concrete date for a possible ending of strict confinement, Macron acknowledged that the country had not been prepared for a crisis that has killed nearly 15,000 people in the country.

“The strict confinement must continue until Monday, May 11,” Macron said in a TV address, adding that it could then be eased “if we continue to be good citizens, responsible and respect the rules, and if the spread of the virus has indeed continued to slow”.

The lockdown has confined the French to their homes since March 17 with only brief trips allowed outside for shopping and other essential errands.-

The epidemic is “beginning to steady… hope is returning,” he said, acknowledging France was “obviously not sufficiently prepared” when its first cases were reported last February.

“We lacked gowns, gloves, gel and we were not able to hand out as many masks as we would have liked,” he said.

Schools and daycare centres could gradually reopen as well as some businesses, he said. But cafes, restaurants and other places with large public gatherings will remain shut and universities are unlikely to resume any classes or testing until the summer, he added.

Older and vulnerable people will have to continue to stay home and the government will provide face masks to others when they venture outside.

“For the most exposed workers and in certain situations such as public transport, their use could become systematic,” Macron said.

“May 11 will be the start of a new phase. It will be progressive and the rules can be adapted according to our results,” he said.

Testing capacities will be ramped up as well so that anyone showing symptoms can be diagnosed, with those testing positive placed in quarantine — a measure doctors have urged as a key method for containing the outbreak.

The government will also work on developing an app for phones that could identify people who had come into contact with an infected person.

France’s daily death rate was once again below its peak level on Monday — 574 new deaths from COVID-19 for a total of 14,967 since the outbreak began.

The number of people in intensive care fell for the fifth day in a row, with 24 fewer people, leaving 6,821 in a serious condition.

“We will have better days,” Macron said. “And the virtues allowing us to hold out today are the ones that will help us build our future: our solidarity, our confidence, and our will.”

A study by France’s INSERM health research institute and others published Sunday warned that lifting the confinement rules too soon could spur a “crushing second wave”.

Critics say Macron and his government have muddled their coronavirus messages, in particular by initially claiming that widespread use of face masks was not necessary, only to say weeks later that people should be wearing them in public.