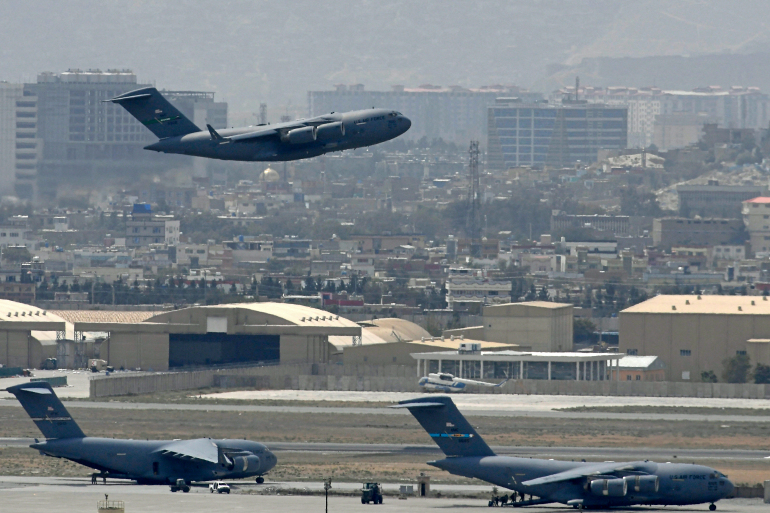 An US Air Force aircraft takes off from the airport in Kabul on August 30, 2021. (Photo by Aamir QURESHI / AFP)

The United States completed the withdrawal of its forces from Afghanistan, the Pentagon said on Monday, after a chaotic evacuation of thousands of Americans and Afghan allies to close out U.S. involvement there after 20 years of conflict.

The operation came to an end before the Tuesday deadline set by President Joe Biden, who has drawn heavy criticism from both Democrats and Republicans for his handling of Afghanistan since the Taliban made rapid advances and took over Kabul earlier this month.

The withdrawal was announced by General Frank McKenzie, commander of the U.S. Central Command, who said the final flights did not include some of the dozens of Americans who remained behind.

More than 122,000 people have been airlifted out of Kabul since Aug. 14, the day before the Taliban regained control of the country two decades after being removed from power by the U.S.-led invasion in 2001.

The United States and its Western allies scrambled to save citizens of their own countries as well as translators, local embassy staff, civil rights activists, journalists and other Afghans vulnerable to reprisals.

The evacuations became even more perilous when a suicide bomb attack claimed by Islamic State – enemy of both the West and the Taliban – killed 13 U.S. service members and scores of Afghans waiting by the airport gates on Thursday.

Biden promised after the bloody Kabul airport attack to hunt down the people responsible.

Two U.S. officials said “core” diplomatic staff were among 6,000 Americans to have left. They did not say whether that included top envoy Ross Wilson, expected to be among the last civilians to depart.

A U.S. official said initial reports did not indicate any U.S. casualties from as many as five missiles fired on the airport. Islamic State claimed responsibility for the rocket attacks.

In recent days, Washington has warned of more attacks, while carrying out two air strikes. It said both hit Islamic State targets, one thwarting an attempted suicide bombing in Kabul on Sunday by destroying a car packed with explosives, but which Afghans said had struck civilians.

Tuesday’s deadline for troops to leave was set by Biden, fulfilling an agreement reached with the Taliban by his predecessor, Donald Trump to end the United States’ longest war.

But having failed to anticipate that the Taliban would so quickly conquer the country, Washington and its NATO allies were forced into a hasty exit. They leave behind thousands of Afghans who helped Western countries and might have qualified for evacuation.

Here’s a timeline of some of the biggest developments during the 20-year conflict.