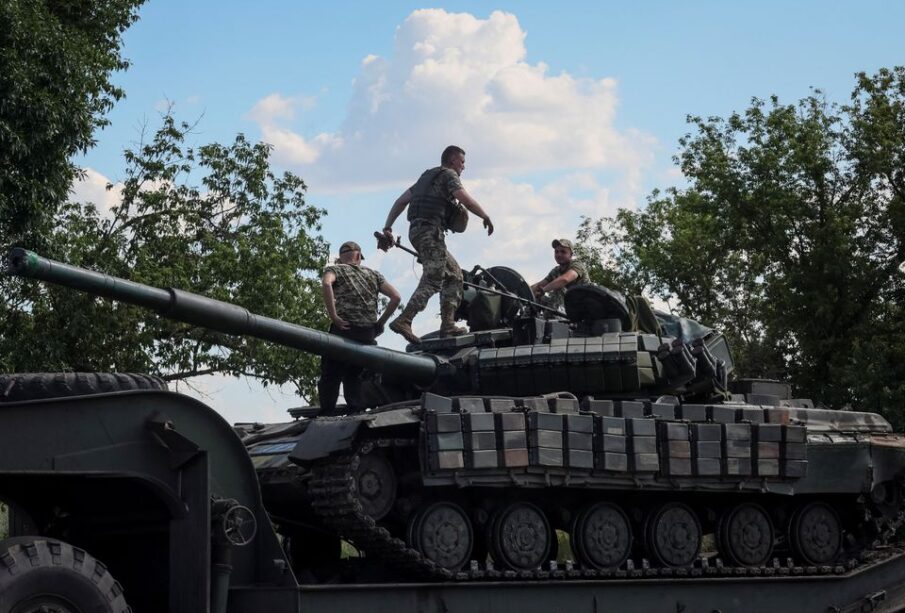 Ukrainian servicemen are seen on a tank loaded on a military truck, amid Russia's invasion of Ukraine, in the Donbas region, Ukraine July 12, 2022. REUTERS/Gleb Garanich

The strike on Nova Kakhovka in the Kherson region killed 52 people, Ukraine’s military said on Tuesday. The town’s Russia-installed authorities said that at least seven people had been killed and around 70 injured, Russia’s TASS news agency reported.

The strike came after Washington supplied Ukraine with advanced HIMARS mobile artillery systems which Kyiv says its forces are using with growing efficiency.

“Based on the results of our rocket and artillery units, the enemy lost 52 (people), an Msta-B howitzer, a mortar and seven armoured and other vehicles, as well as an ammunition depot in Nova Kakhovka,” Ukraine’s southern military command said in statement.

The area is of strategic importance because of its Black Sea access, once thriving agricultural industry and location just north of Russian-annexed Crimea.

Unverified videos posted on social media showed an immense fireball erupting into the night sky. Images released by Russian state media showed a wasteland covered in rubble and the remains of buildings.

An official from the Russian-backed local administration said that Ukraine had used the HIMARS missiles and that they had destroyed warehouses containing saltpetre, a chemical compound which can be used to make fertilizer or gunpowder.

“There are still many people under the rubble. The injured are being taken to the hospital, but many people are blocked in their apartments and houses,” Vladimir Leontyev, head of the Russia-installed Kakhovka District military-civilian administration, was quoted by TASS as saying.

He said that warehouses, shops, a pharmacy, gas stations and a church had been hit.

The Ukrainian Defence Ministry did not immediately respond to a request for comment about the kind of weapon used.

Russia continued to pound eastern Ukraine in an effort to gain control of Donetsk province and the entire industrial Donbas region. Moscow earlier this month captured Luhansk province, which makes up the rest of the Donbas.

Russia says it wants to wrest the Donbas from Ukraine on behalf of Moscow-backed separatists in two self-proclaimed people’s republics whose independence it recognised on the eve of the war.

Ukraine is bracing for what it expects will be a massive new Russian offensive in the east. Regional Donetsk Governor Pavlo Kyrylenko said there was a significant buildup of Russian troops, particularly in the Bakhmut and Siversky areas, and around Sloviansk and Kramatorsk.

The entire front line in the region was under constant shelling as Russian troops tried to break through but they were being repelled, he said.

Russia’s campaign in Ukraine, which it calls a “special military operation,” is nearing five months old and is Europe’s biggest conflict since World War Two.

Russia says it sent troops into Ukraine on Feb. 24 to demilitarise the country and rid it of nationalists threatening Russian speakers there. Ukraine and Western countries say Russia’s claims are a baseless pretext to attack.

The conflict has laid waste to Ukrainian cities and caused 5.2 million people to flee the country, according to the U.N.

The U.N. human rights office said on Tuesday that 5,024 civilians had been killed in Ukraine since the invasion began, adding that the real toll was likely much higher.

The conflict has blocked exports of Ukraine’s grain, exacerbating a global food crisis. More than 20 million tonnes of grain are stuck in silos at the key Black Sea port of Odesa.

Ukraine expects monthly grain exports to rise by 500,000 tonnes as a result, Vaskov said. Ukraine is also negotiating with Romania and the European Commission about increasing shipments through the Sulina canal, he said.