The Times of Earth, International Edition
0
829 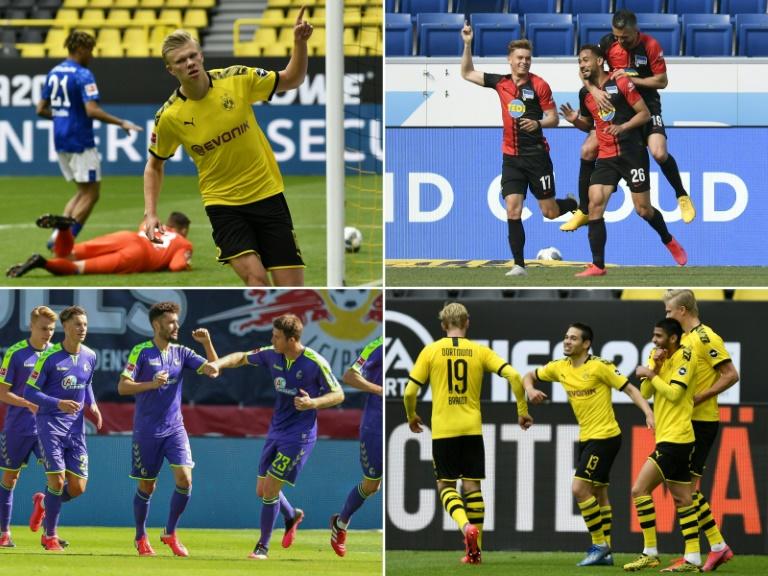 German football champions Bayern Munich were set to play their first match in more than two months on Sunday as coronavirus restrictions were eased in parts of Europe, but the devastating pandemic remained on the march elsewhere with deaths soaring in Brazil.

With the worldwide death toll topping 310,000 and the global economy reeling from the vast damage caused by lockdowns, the reopenings in some of the hardest-hit countries such as Italy provided much-needed relief.

But the number of COVID-19 fatalities soared past 15,000 in Brazil with 230,000 infections, making it the fourth-highest number of cases in the world and a grim reminder of the scale of the crisis.

And in the United States — the worst-hit country — former President Barack Obama launched a scathing attack on the way the crisis has been handled, saying a lot of American leaders “aren’t even pretending to be in charge”.

In Germany, where authorities have started a gradual easing of restrictions, Bundesliga champions Bayern Munich were set to play Union Berlin in the capital on Sunday as the league resumed play in vacant, echoing stadiums.

The Bundesliga restart is under intense scrutiny as a test case, with top sports competitions trying to find ways to resume play without increasing the risk of spreading the virus, which has infected 4.6 million people globally.

“The whole world will be looking at Germany, to see how we get it done,” said Bayern boss Hansi Flick.

League heavyweights Borussia Dortmund on Saturday hosted rivals Schalke at the all-but-empty Signal Iduna Park, which would usually be packed with more than 80,000 raucous fans.

“It’s sad that matches are played in empty stadiums, but it’s better than nothing,” said 45-year-old Borussia Dortmund fan Marco Perz, beer in hand, as he prepared to watch the game on TV.

Dortmund’s Erling Braut Haaland became the first player to score a goal after the two-month shutdown, and celebrated by dancing alone — away from his applauding teammates — in keeping with the strict hygiene guidelines which allowed the league to resume.

The only noise was the cheering and clapping of players and coaches.

Despite the optimism in some European countries, the rising infection and fatality numbers in other parts of the world offered reminders of the threat posed by the deadly disease.

Brazil became the country with the fourth-highest number of reported infections with 230,000, and its death toll crossed 15,000, while Chile locked down its capital Santiago after a sharp rise in cases.

But Brazil’s far-right President Jair Bolsonaro is keen to end lockdowns, which he claims have unnecessarily damaged the South American nation’s economy over a disease he has dismissed as “a little flu”.

Across the Atlantic, with the Northern Hemisphere’s summer approaching, authorities are moving to give their economies a push by helping the tourism industry salvage something from the wreckage.

Italy, for a long stretch the world’s worst-hit country, announced that European Union tourists would be allowed to visit from June 3, and a 14-day mandatory quarantine would be scrapped.

“We’re facing a calculated risk in the knowledge that the contagion curve may rise again,” Conte said during a televised address.

“We have to accept it otherwise we will never be able to start up again.”

In France, the first weekend after the strictest measures were lifted saw many venture out into the spring sunshine, or hit the beach.

With the threat of a second wave of infections on their minds and with no vaccine available, authorities in many countries have asked people not to throng public spaces as they are made accessible again.

And a stark warning came on Sunday from one of the top medical experts in China, where the disease first emerged late last year but has largely been brought under control after more than 4,600 deaths.

“The majority of… Chinese at the moment are still susceptible… because (of) a lack of immunity,” Zhong Nanshan, the Chinese government’s senior medical advisor, told CNN.

“We are facing (a) big challenge, it’s not better than the foreign countries I think at the moment.”

But with people growing weary of confinement and suffering immense economic pain, pressure is growing on governments to ease lockdowns despite that threat.

That pressure has been evident in the United States, where President Donald Trump has been severely criticised for his handling of the crisis.

With more than 88,000 deaths and 1.47 million confirmed coronavirus cases, the US is the worst-hit country on the planet, and the president is keen to turn the corner and restart the world’s biggest economy despite experts warning against moving too quickly.

Former president Barack Obama on Saturday took a swipe at the response to the pandemic, telling graduates at a virtual college commencement ceremony that many leaders today “aren’t even pretending to be in charge” — a remark widely regarded as a rare rebuke of his successor.

“Unfortunately, a lot of so-called grown-ups, including some with fancy titles and important jobs, still think that way -– which is why things are so screwed up.”