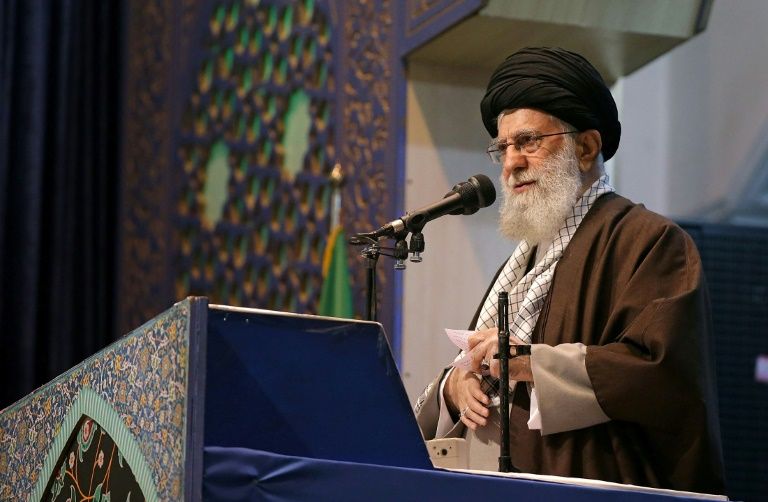 Iran’s supreme leader said Friday that demonstrations at home over its accidental downing of a Ukrainian airliner were unrepresentative of the Iranian people and accused the country’s enemies of exploiting it for propaganda purposes.

Leading the main weekly Muslim prayers in Tehran for the first time since 2012, Ayatollah Ali Khamenei said the January 8 downing was a “bitter” tragedy but should not be allowed to overshadow the “sacrifice” of one of Iran’s most storied commanders, assassinated in a US drone strike in Baghdad.

His sermon came after a traumatic month for Iran in which the country had appeared on the brink of war with the United States before mistakenly shooting down the Ukrainian jet with the loss of all 176 people on board.

“The plane crash was a bitter accident, it burned through our heart,” Khamenei said in an address punctuated by cries of “Death to America” from the congregation.-

“But some tried to… portray it in a way to forget the great martyrdom and sacrifice” of Major General Qasem Soleimani, the assassinated head of the foreign operations arm of Iran’s elite Revolutionary Guards.

Khamenei said Iran’s enemies had seized on the plane tragedy in a bid to undermine the Islamic republic.

“Our enemies were as happy about the plane crash as we were sad … happy that they found something to question the Guards, the armed forces, the system,” he said.

The air disaster triggered scattered protests in Tehran and other cities, but they appeared smaller than a nationwide wave of demonstrations prompted by a fuel price hike in November.

At least 300 people died in a crackdown by security forces after those demonstrations, according to Amnesty International.

Khamenei said the protesters were unrepresentative of the Iranian people as a whole, who had turned out in their hundreds of thousands for Soleimani’s funeral.

Praising the slain general, Khamenei said his actions beyond Iran’s borders were in the service of the “security” of the nation and that the people are in favour of “firmness” and “resistance” in the face of enemies.

“The few hundred who insulted the picture of General Soleimani, are they the people of Iran, or this million-strong crowd in the streets?” he asked.

Khamenei appeared to be referring to the reported tearing down of a portrait of Soleimani by protesters in Tehran just days after mass funeral processions for the general.

It was the likes of Soleimani, not the protesters, who had devoted their lives to Iran, Khamenei said.

“Not only did the deceived ones… not give their lives for Iran, but they did not sacrifice one of their interests for their country.”

Khamenei was speaking opposite a huge portrait of Soleimani hung behind the congregation.

Thousands of worshippers crammed into the mosque and more spilt over onto the streets outside, kneeling in the snow.

Police were out in force as they have been since the protests erupted over the downing of the airliner, AFP correspondents reported.

A commemoration for the victims of the crash held in the city of Isfahan on Thursday turned into a protest, video footage posted on social media showed.

Concentrated in the capital, the protests appeared smaller than the nationwide demonstrations n November.

Khamenei’s sermon comes at a tumultuous moment for Iran, which had seemed headed for conflict earlier in January after Soleimani was killed on January 3 outside Baghdad airport, prompting retaliatory strikes against Iraqi bases housing US troops.

Khamenei hailed the strikes as a “sign of divine help”.

“It was a strike to their reputation, to America’s might. This cannot be compensated by anything … sanctions cannot return the lost prestige of America,” he said.

The animosity between Washington and Tehran has soared since Trump unilaterally withdrew from a landmark nuclear deal in 2018 and reimposed biting sanctions.

Russian Foreign Minister Sergei Lavrov on Friday urged a “de-escalation” of the tensions and an end to the “constant threats”.

The plane tragedy “is a very serious red flag and signal to start working on de-escalation and not on constant threats and combat aviation flights in this region”, Lavrov said.

In June 2019, Iran and the United States had also appeared to be on the brink of direct military confrontation after Tehran shot down a US drone it said had violated its airspace.

Trump said he called off retaliatory strikes at the last minute.

President Hassan Rouhani said Thursday that Iran was “working daily to prevent military confrontation or war”, and maintained that a dialogue with the world was still “possible”.