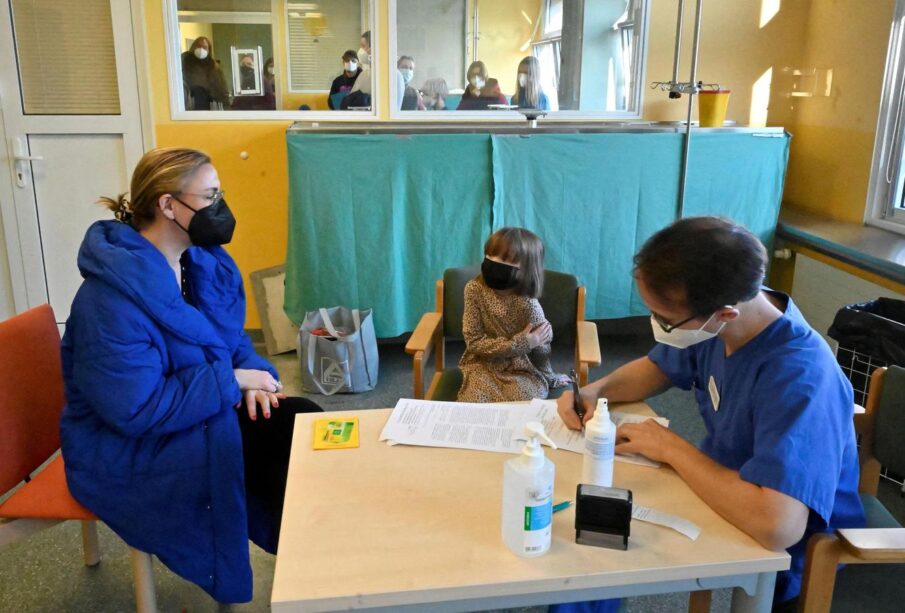 As Europe starts vaccinating younger children, countries are pursuing very different strategies in what will be a major test of parents’ willingness to get their kids inoculated.

One region in Italy is sending in clowns and jugglers to clinics, France and Germany are targeting only the most vulnerable kids, while Denmark has been administering shots even before the specially-designed vials and syringes have arrived.

“Vaccination must be a game, a joyful moment when children can feel at ease,” said Alessio D’Amato, health chief of the central Lazio region, in a video as he declared Dec. 15 “Vax Day” for children in the region.

The European Medicines Agency (EMA) approved the use of Pfizer-BioNTech’s lower-dose vaccine on the 5-11 age group last month, following the go-ahead for older children in May.

The first deliveries of the smaller paediatric vials will not arrive until Monday though. Timings for the rollout vary, but most countries are preparing to start getting shots into young arms a day or two after the first shipments arrive.

Belgium may not start roll-out until early January while the national authorities prepare to issue guidance.

Spain, which ranks among the world’s most-highly immunized countries with 90% of people aged 12 or over fully vaccinated, will start inoculating younger children on Dec. 15.

Inoculating children and young people, who can unwittingly transmit COVID-19 to others at higher risk of serious illness, is considered a critical step towards taming the pandemic. In Germany and the Netherlands, kids now account for the majority of cases.

The roll-out comes as the European Union battles a major wave of infections, accounting for well over half of global infections and 50% of deaths globally.

Some 27 million 5-11 year olds are eligible for the vaccine in the bloc of about 450 million.

But a major hurdle will be winning over parents.

A survey in Italy by polling firm Noto Sondaggi published on Dec. 5 found that almost two-thirds of those surveyed backed vaccinations, but the percentage dropped to 40% among parents with children aged 5-12 years old.

A lack of data on the effects on children was given as the main reason for the hesitancy, while a third thought that children would be less likely to get infected and 9% worried about long-term side-effects.

The U.S. roll-out has been sluggish since it started last month. Of the 28 million eligible U.S. children in that age group, around 5 million have received at least one dose.

Some parents have been concerned about reports of heart inflammation, a rare vaccine side effect seen in young men at higher rates than the rest of the population.

Last week, U.S. Centers for Disease Control and Prevention said it had not found any reports of the condition among 5-11 year-old recipients of the vaccine.

No serious safety concerns related to the vaccine have been identified in clinical trials, Pfizer and BioNTech have said.

“The data show that it is safe, effective, and with results very similar to those for older children,” said Dr Luigi Greco, a paediatrician and Lombardy regional manager for training for the Italian family paediatricians’ union.

Still, some governments are limiting the rollout until there is more data available.

In France, only kids who are overweight or who have a serious health condition will be offered access to vaccination to start with.

Germany’s vaccination advisory commission STIKO said it could not make a general recommendation for the vaccine due to limited data available.

It recommended that children aged five to 11 with pre-existing conditions be given a shot.

Some health authorities aren’t even waiting for the specially-made kits to arrive, however, instead using vaccines in stock for adults but extracting only a third of the dose.

When the Austrian capital Vienna last month opened the first 9,200 slots for inoculating kids, all the appointments were booked within days.

Denmark followed suit on Nov. 28, saying there was no time to lose. After less than two weeks, more than 49,000 children aged 6 to 11 had received their first shot, around 13% of that age group.

The German state of Saxony, among the hardest hit by surging COVID-19 infections, started vaccinating at-risk children under 12 years of age.

On Friday, Franz Knoppe travelled more than 100 kilometres (60 miles) to the Leipzig Heart Centre in the state’s most populous city from Chemnitz with his two children, aged seven and 11, for a kids’ vaccination drive.

“We were so happy that vaccinations for children under the age of 12 are possible now,” he told Reuters at the hospital.

Mathilda, who did not provide her last name, was at the hospital with her six-year old daughter Erna.

“It’s important to vaccinate the children and to offer safety, just like for adults,” Mathilda said.

Regional authorities in Italy, meanwhile, are coming up with inventive ways to entertain and engage kids while they get jabbed and making it easy for parents to arrange a slot.

In Liguria, the authorities have created a cartoon superhero called Captain Vaccine who carries a doctor’s bag and dons a white coat with a big “V” printed on his chest. He stars in a comic to be distributed in vaccination centres.

Night of devastating tornadoes likely kills more than 100 in Kentucky