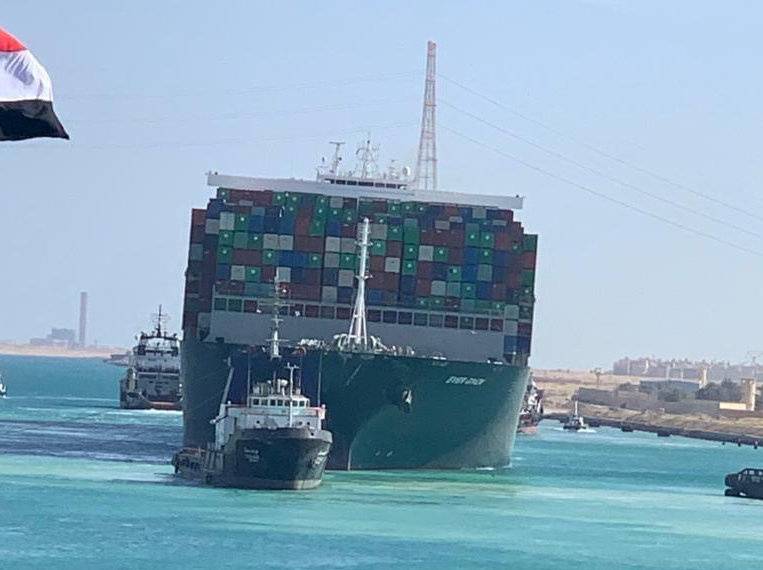 Ship Ever Given, one of the world's largest container ships, is seen after it was fully floated in Suez Canal, Egypt March 29, 2021. Suez Canal Authority/Handout via REUTERS

The MV Ever Given was refloated and the Suez Canal reopened to traffic Monday, sparking relief almost a week after the huge container ship got stuck and blocked a major artery for global trade.

Tugboat crews sounded their foghorns in celebration after the Japanese-owned megaship the length of four football fields was fully dislodged from the sandy banks of the Suez.

World oil prices eased on the news of the reopening of the waterway that connects the Mediterranean and Red Sea and through which more than 10 percent of world trade passes.

Suez Canal Authority official Khaled Taha told reporters in the city of Ismailia on the Suez that maritime traffic had restarted after the “successful refloating”.

The SCA cautioned, however, that it will take more than three days to clear the traffic jam of ships stuck at the northern and southern ends of the canal.

In the hours before the ship was dislodged, the tailbacks had reached 425 vessels.

Canal services provider Leth Agencies said in a tweet that the MV Ever Given had been “safely escorted to Great Bitter Lake” by the authority. Fourty-three vessels were expected to leave the transit area heading south, it added.

Maritime data company Lloyd’s List said the blockage had held up an estimated $9.6 billion worth of cargo each day between Asia and Europe.

In the small canal-side village of Manchiyet al-Rougoula, residents watched in amazement as the immense container ship left the bank.

A father and his family climbed to the roof of their red brick house to get a better view as the ship with at least nine levels of containers slowly passed by.

“We are happy to see the boat move (and) thank God,” said one resident who asked not to be named.

A former SCA chairman, Mohab Mamish, expressed pride in the operation, telling AFP: “I am well and truly overjoyed … We were able to get out of a very tight jam.”

On social media too, Egyptians greeted the news with jubilation and shared a flurry of memes, including a video montage of a man representing Egypt triumphantly carrying the ship on his shoulders, to applause from the world.

Ahmed Abbas, a Suez canal employee, shared live footage from the scene on his Facebook account, exclaiming: “Praise be to God, the vessel is finally out! Well done to the SCA boys!”

Egypt has lost some $12-14 million in transit revenues each day that the ship was stuck, according to the canal authority.

Dutch company Boskalis, which played a key role in the rescue operation, said its “team of experts, working in close collaboration with the Suez Canal Authority, successfully refloated” the MV Ever Given.

The operation, carried out under time pressure and “the watchful eye of the world”, required 13 tug boats and the dredging of some 30,000 cubic metres of sand, said Peter Berdowski, CEO of Boskalis.

The freed vessel travelled north to the Great Bitter Lake, through which the canal passes, “for an inspection of its seaworthiness”, said the Taiwan company Evergreen which operates the ship.

“The outcome of that inspection will determine whether the ship can resume its scheduled service.”

The stern of the ship was dislodged early Monday, sparking immediate praise from Egypt’s President Abdel Fattah al-Sisi, even as Boskalis initially warned that the bow would prove more difficult to unwedge.

“Today, Egyptians have been successful in putting to an end the crisis of the stranded ship in the Suez Canal, despite the enormous complexity surrounding the process,” Sisi said.

Salvage crews worked around the clock ever since the accident which was blamed on high winds and poor visibility during a sandstorm, although the canal authority also cited the possibility of human error.

Rescue teams had focused on efforts to remove sand around the ship, which was dredged up to a depth of 18 metres (59 feet).

The crisis forced companies to choose between waiting or rerouting vessels around Africa, which adds 9,000 kilometres (5,500 miles) and over a week of travel to the trip between Asia and Europe.

In a sign of the knock-on effects from the Suez blockage, authorities in war-wracked Syria said the crisis had hit its fuel imports from Iran and forced it to ration already scarce supplies.

Romania’s animal health agency said 11 ships carrying livestock out of the country were also impacted, while the charity Animals International had warned of a potential “tragedy” affecting some 130,000 animals.

Johnson & Johnson agrees to supply African Union with up to 400 ...