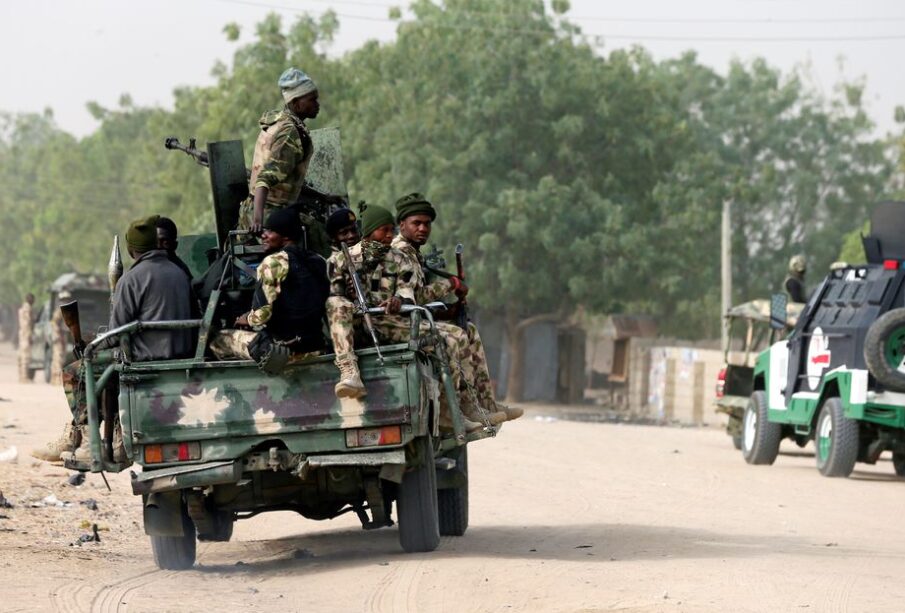 Nigerian military ride on their truck as they secure the area where a man was killed by suspected militants during an attack around Polo area of Maiduguri, Nigeria February 16, 2019. REUTERS/Afolabi Sotunde

A joint military force from Nigeria, Niger and Cameroon said on Sunday it had killed more than 100 Islamist insurgents, including 10 commanders, in the past few weeks, as it intensifies a ground and air offensive in the Lake Chad region.

Boko Haram fighters and its splinter Islamic State West Africa Province (ISWAP) group have for more than a decade battled the Nigerian army in a conflict that has sucked in neighbouring states.

“Within the period of this operation, well over a hundred terrorists have been neutralised, including over 10 top commanders … following intelligence-driven lethal air strikes in the Lake Chad islands by the combined air task-forces,” Dole said.

Dole did not give the period covered by the operation or number of troops killed but said 18 soldiers were injured by improvised explosive devices planted by retreating insurgents.

The Islamist insurgency is concentrated in the northeast of Nigeria and has left thousands dead while driving millions from their homes into camps for internally displaced persons.

Nigeria received a boost after the United States last week approved a nearly $1 billion weapons sale. U.S. lawmakers had put a hold on the deal over concerns about possible human rights abuses by the Nigerian government. read more

Boko Haram has been on the back foot since the death of its leader, Abubakar Shekau, last year in May during a battle with rival ISWAP. Nigeria says thousands of Boko Haram fighters and their families have surrendered since last year.