The Times of Earth, International Edition
0
702 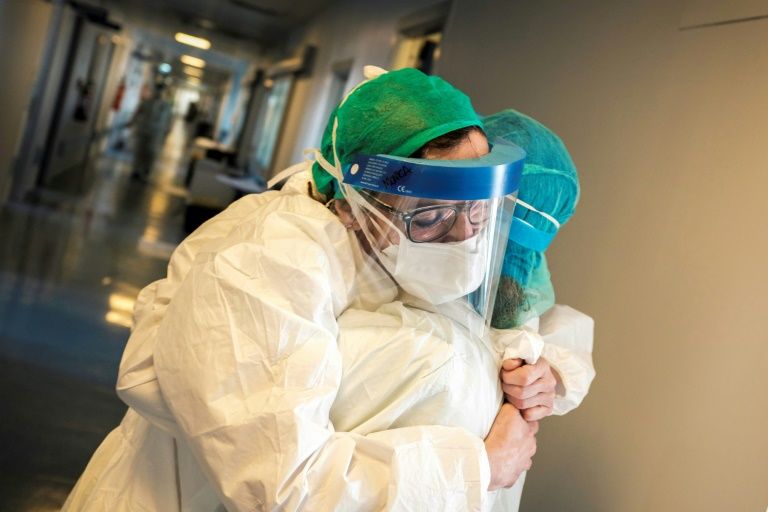 Italian healthcare workers are exhausted from their war against the new coronavirus. Photo: AFP

The death toll from an outbreak of coronavirus in Italy rose by 602 on Monday, the smallest increase for four days, while the number of new cases also slowed, raising hope that the most aggressive phase of the epidemic may be passing.

The Civil Protection Agency said the number of fatalities from the month-old contagion stood at 6,077, while confirmed cases totaled 63,927, an increase of 4,789 over the past 24 hours — the smallest rise for five days.

“Today is perhaps the first positive day we have had in this hard, very tough month,” said Giulio Gallera, the top health official in the northern region of Lombardy, which has been hardest hit by the outbreak.-

“It is not the time to sing victory, but we are beginning to see the light at the end of the tunnel,” he told reporters.

However, there was also a significant fall in the number of tests carried out, and the head of Italy’s national health institute, Silvio Brusaferro, said it was too soon to say if the recent decline in daily deaths and new cases would continue.

Unions in Lombardy earlier announced they would strike on Wednesday to protect the health of their workers, saying a government decree temporarily shutting businesses due to the coronavirus emergency contained too many loopholes.

Italy has suffered the world’s deadliest outbreak of the respiratory pandemic, with 62% of the fatalities registered in Lombardy, the country’s most populous and wealthy region.

A government decree signed on Sunday said all but “essential” businesses must close until April 3 and set out a long list of exceptions deemed vital to keep Italy’s supply chain running.

The Lombardy branches of the three main metalworkers unions, FIOM, FIM and UILM, said the list “has been excessively extended, covering areas of dubious importance” and allowing firms “excessive discretion” to apply for exemptions.

In a joint statement, they trio of unions said workers in all factories not directly linked to the beleaguered health sector would down tools. Lombardy’s chemical workers said they would also stay home on March 25.

“The decree allows a lot of firms to remain open, many without the proper guarantees and safety norms, creating conditions not agreed with us and fanning a lot of concern among workers,” said Paolo Pirani, national head of the UILTEC chemical and textile workers’ union.

Bank workers threatened a nationwide walkout, saying they were forced to work in unsafe conditions without masks, gloves and sufficient amounts of antiseptic gels. Several banks have already temporarily closed branches to sanitize them.

Many of the country’s most prominent companies have already suspended their output in Italy, including eyeware manufacturer Luxottica, luxury carmaker Ferrari and tyre maker Pirelli. The Italian-American automaker Fiat Chrysler told employees on Monday it would halt production in all European and North American plants and help with the production of masks during the coronavirus emergency, a union representative said.

The head of employers’ lobby Confindustria warned about the economic impact of the factory closures.

By shutting 70% of the country’s output, Italy will lose 100 billion euros ($107.63 billion) a month, he told Sky Italia in a television interview.

Italy’s northern regions have borne the overwhelming brunt of the crisis but there is concern the virus could spread into the poorer south where health systems are less well-equipped.

The first death was recorded on Monday in the southern region of Basilicata, meaning all Italy’s 20 regions have now registered fatalities.

Sebastiano Musumeci, the regional president of Sicily, protested on Monday that many non-residents were arriving on the southern island on car ferries.

“The national government must intervene because we Sicilians are not willing to be slaughtered like cattle,” he said.