The Times of Earth, International Edition
0
3289 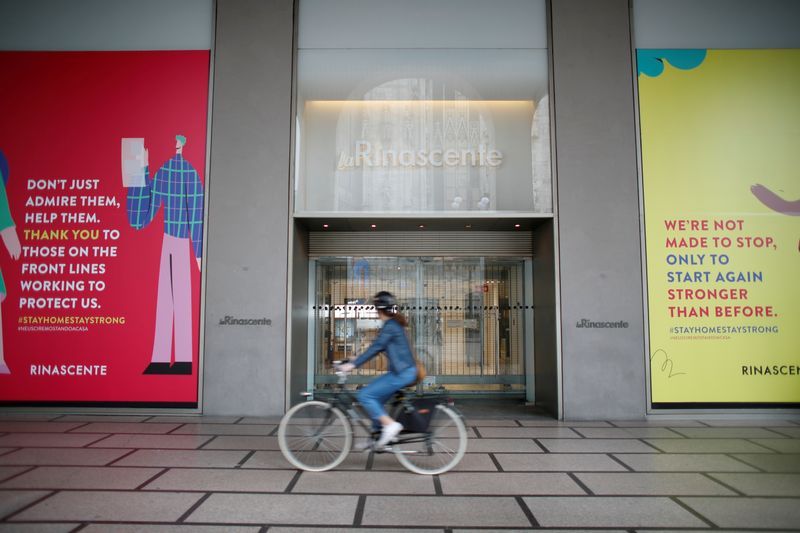 Spread of the coronavirus disease (COVID-19) in Milan. REUTERS

Shops, restaurants and hair salons prepared to reopen in Italy on Monday as the government further eased one of the world’s strictest coronavirus lockdowns, saying it was taking a “calculated risk” to put the country back on its feet.

The euro zone’s third biggest economy is slowly emerging from more than two months of hibernation, with businesses allowed to gradually go back to work as long they can enforce tight sanitary protocols and keep people at least 1 metre apart.

At Milan’s upscale Rinascente department store, guards will keep count through an app of how many people are in the store at any one time. Clothes tried on in changing rooms will be quarantined for 24 hours and shop assistants will spill perfumes on paper tissues rather than having customers handle testers. Access to restaurants will be strictly limited, with only family members allowed to sit close to each other.

Rinascente’s Chief Executive Pierluigi Cocchini said it was difficult to predict what appetite there would be to shop after weeks of isolation. The store is reopening with markdowns of up to 60% as, like most retailers, it needs to clear unsold stocks.

“The hope is to take a step towards normality. It won’t be business as usual given all the protocols, but this is the new normal for now and we have to accept it,” he told Reuters.

Tourists, still absent, would normally generate a third of the store’s sales.

Business association Confcommercio expects consumer spending for clothing, which stood at 60 billion euros ($65 billion) in 2019, to shrink by 20% this year and a quarter of the country’s 115,000 fashion retailers to go bust.

“I know that for several sectors of the economy, reopening does not mean recovery,” Prime Minister Giuseppe Conte said late on Saturday as he announced the lifting of the restrictions.

With its economy facing severe recession and public debt expected to spiral to more than 150% of its annual economic output, the government has been desperate to get the country back to work without triggering a second wave of the epidemic.

“We have to restart,” said Rosy Riente, which runs the Cafe de l’Ange in the posh Alpine resort of Courmayeur, even though distancing rules mean that she can now sit a maximum of 35 people at any one time in her bar instead of 100.

“So far all we have done is spend money to buy sanitising gels and disinfectants,” she said.

Others prefer to wait until European borders reopen on June 3. Tourism contributes 13% to the country’s economic output.

“My shop looks like a hospital, with plexiglass screens at the till, sanitisers, face masks and gloves,” said Maurizio Di Rienzo, owner of suitcase shop Pellux in central Milan, whose eight employees have been furloughed.

“90% of my clients are tourists, most of them Chinese. It doesn’t make sense for me to reopen just yet.”

The daily death toll from the COVID-19 epidemic in Italy fell to 145 on Sunday, the lowest since March 9, against 153 the day before, the Civil Protection Agency said, while the daily tally of new cases fell to a March-4 low of 675 from 875 on Saturday.

The total death toll since the outbreak came to light on Feb. 21 now stands at 31,908 the agency said, the third highest in the world after those of the United States and Britain.

The number of confirmed cases amounts to 225,435, the sixth highest global tally behind those of the United States, Spain, Britain, Russia and Brazil.

People registered as currently carrying the illness fell to 68,351 from 70,187 the day before.

There were 762 people in intensive care on Sunday, down from 775 on Saturday, maintaining a long-running decline. Of those originally infected, 125,176 were declared recovered against 122,810 a day earlier.

The agency said a total of 1.933 million people had been tested for the virus as of Sunday, against 1.900 million on Saturday, out of a population of around 60 million.