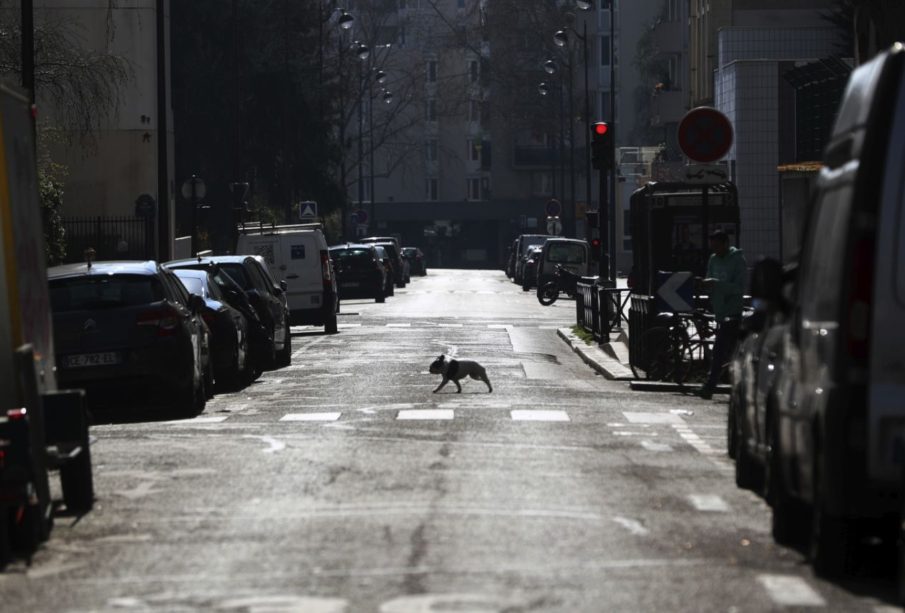 The Chinese city where the coronavirus first took hold reported no new homegrown cases Thursday, while the death toll in Italy was poised to overtake that of China in a dramatic illustration of how the outbreak has pivoted toward Europe and the United States.

The worldwide death toll crept toward 10,000 as the total number of infections topped 220,000, including nearly 85,000 people who had recovered.

French Prime Minister Edouard Philippe pleaded for people to keep their distance from one another to avoid spreading the virus, even as the crisis pushed them to seek comfort.

“When you love someone, you should avoid taking them in your arms,” he said in parliament. “It’s counterintuitive, and it’s painful; the psychological consequences, the way we are living, are very disturbing — but it’s what we must do.”

Italy, a country of 60 million, registered 2,978 deaths Wednesday after another 475 people died. Given that Italy has been averaging more than 350 deaths a day since March 15, it’s likely to overtake China’s 3,249 dead — in a country of 1.4 billion — when Thursday’s figures are released at day’s end.

U.N. and Italian health authorities have cited a variety of reasons for Italy’s high toll, key among them its large elderly population that is particularly susceptible to developing serious complications from the virus. Italy has the world’s second oldest population after Japan’s and the vast majority of Italy’s dead — 87% — were over age 70.

Jonas Schmidt-Chanasit, a virologist at Germany’s Bernhard Nocht Institute for Tropical Medicine, said Italy’s high death rate could be explained in part by the almost total collapse of the health system in some parts.

“And then people die who wouldn’t have died with timely intervention,” he said. “That’s what happens when the health system collapses.”

A total of 222,642 cases have been reported worldwide, with 9,115 deaths and 84,506 recoveries, according to a tally kept by Johns Hopkins University. Aside from the elderly and the sick, most people only have mild or moderate symptoms, like a fever or cough.

Spain has been the hardest hit European country after Italy, and in Madrid a four-star hotel began operating as a makeshift hospital for coronavirus patients.

The director of the group that runs the Ayre GH Colon hotel tweeted: “365 rooms more to help win the war.” The Madrid Hotel Business Association says it has placed 40 hotels with room for 9,000 people at the service of the Madrid region, which has near half of Spain’s some 17,000 cases so far.

The British supermarket chain Sainsbury’s reserved the first hour of shopping for vulnerable customers, one of many such efforts around the world.

Jim Gibson, 72, of southeast London, said he found most of his groceries there in a “relatively trauma-free” experience. But he fretted that he hadn’t been able to get the medicine he needed for his wife and himself, and expressed concerns that Britain’s Conservative government had been too slow in ramping up tests for the virus.

“You can’t go on ignoring World Health Organization guidelines — if they’re wrong, who the hell is right? … and their thing is test, test, test,” he said. “Let’s have no shilly-shallying.”

In a high-profile case, Michel Barnier, the European Union’s chief negotiator for its future relationship with Britain after Brexit, said he had been infected with the coronavirus.

“I am following all the necessary instructions, as is my team,” the 69-year-old Barnier said in a tweet. “For all those affected already, and for all those currently in isolation, we will get through this together.”

Thursday marked the first time the Chinese city of Wuhan, where the virus first emerged late last year, showed no new numbers since Jan. 20. The news offered a rare glimmer of hope and perhaps a lesson in the strict measures needed to halt its spread.

Wuhan once was the place where thousands lay sick or dying in hurriedly constructed hospitals. But Chinese authorities said Thursday that all 34 new cases recorded over the previous day had been imported from abroad.

“Today, we have seen the dawn after so many days of hard effort,” said Jiao Yahui, a senior inspector at the National Health Commission.

Wuhan has been under a strict lockdown since January.

While China did not report any new cases in Wuhan or Hubei province, it did record eight additional deaths.

European stock markets were up only slightly after losses in Asia despite a massive 750 billion-euro stimulus package announced overnight by the European Central Bank. Oil dropped below $21 a barrel Wednesday for the first time since 2002, and rose slightly Thursday to $23.

The United Nations warned that the crisis could lead to the loss of nearly 25 million jobs around the world.

More borders shut, leaving tens of thousands of tourists wondering how they would get home. In the Pacific, Australia and New Zealand shut out tourists, allowing only citizens and residents to return, while Fiji reported its first virus case, a worrying development in a region with poor healthcare.

Iran’s Supreme Leader Ayatollah Ali Khamenei planned to pardon 10,000 more prisoners — among them an unknown number of political detainees— to combat the coronavirus. The country, where more than 1,100 people have already died from the virus, has already released 85,000 prisoners on temporary leave.

In Austria, the western province of Tyrol put 279 municipalities under quarantine in light of a large number of infections there, banning anyone from leaving towns or villages except to go to work.

The U.S. and Canada both closed their borders to all but essential travel and U.S. President Donald Trump said he plans to assert extraordinary powers to immediately turn back to Mexico anyone who crosses over the southern border illegally.

Russia and Mexico each reported their first death from the virus. Mexico closed its popular spring equinox visits to the Pyramids of the Sun and the Moon at Teotihuacan.

In the U.S., Ford, General Motors and Fiat Chrysler, along with Honda and Toyota, said they will shut all of their factories in the U.S., Canada and Mexico. The closing of Detroit’s Big Three alone will idle about 150,000 workers.

The U.S. has reported more than 9,400 coronavirus cases and at least 149 deaths, about half of them in Washington state, where dozens in a suburban Seattle nursing home have died.

Scientists believe the true number of people infected in the United States is higher than reported because many mild cases may have gone unrecognized and the U.S saw delays in ramping up testing.