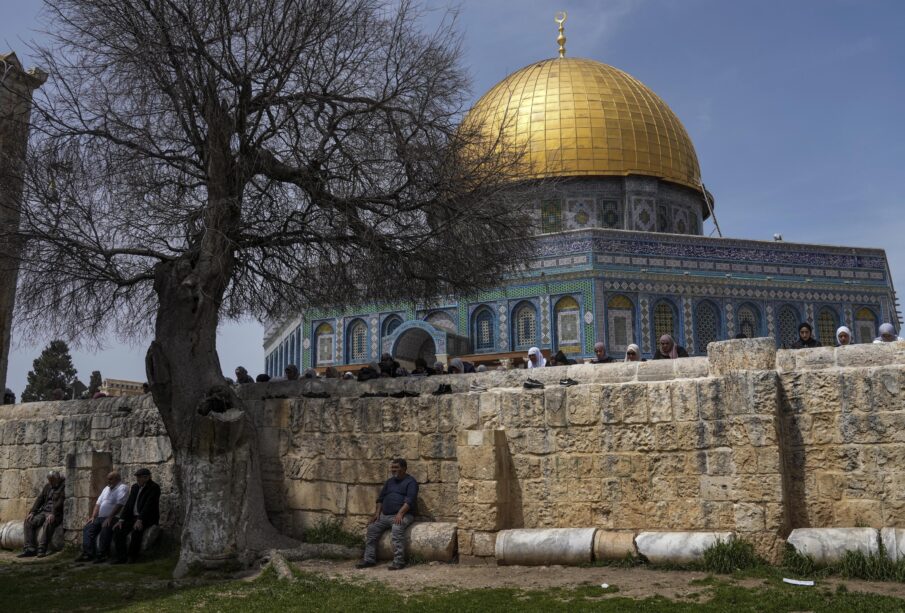 Muslim worshippers gather for Friday prayers, next to the Dome of the Rock Mosque in the Al Aqsa Mosque compound in Jerusalem's old city, Friday, April 1, 2022. AP

Israeli police entered a flashpoint holy site in Jerusalem to clear away Palestinian protesters on Thursday, after Jewish visits that had been paused for the Muslim holidays resumed.

Recent weeks have seen several rounds of clashes at the Al-Aqsa Mosque compound, the third holiest site for Muslims, which is built on a hilltop that is the holiest site for Jews, who refer to it as the Temple Mount. It lies at the emotional heart of the Israeli-Palestinian conflict.

As the visits resumed, dozens of Palestinians gathered, chanting “God is greatest.” Scuffles broke out when the police went to arrest one of them. Police fired rubber-coated bullets on the sprawling esplanade as some Palestinians sheltered inside the mosque itself. The police could later be seen just inside an entrance to the barricaded mosque.

The police said they responded to dozens of people who were shouting incitement and throwing stones, and that one police officer was lightly injured.

But unlike in previous confrontations, Palestinian witnesses said there was no sign of rock-throwing initially. Some of those who sheltered inside the mosque began throwing stones when police entered the building. The witnesses spoke on condition of anonymity because of security concerns.

Under informal arrangements known as the status quo, Jews are allowed to visit the site but not pray there. In recent years, they have visited in ever-increasing numbers with police escorts and many have discreetly prayed, angering the Palestinians as well as neighboring Jordan, which is the custodian of the site. The Palestinians have long feared that Israel plans to eventually take over the site or partition it.

Israel says it is committed to maintaining the status quo, and accuses the Islamic militant group Hamas of inciting the recent violence.

The visits, by mostly nationalist and religious Jews, resumed Thursday after being paused for the last 10 days of the Muslim holy month of Ramadan and the Eid al-Fitr holiday.

Thursday is also Israel’s Independence Day, and in recent days fringe groups had called on Jewish worshippers to celebrate by waving Israeli flags at the holy site. The calls were widely circulated by Palestinians on social media, along with calls to confront any such display.

A Jewish group shared a video that appeared to show a group of visitors singing Israel’s national anthem as police escorted away a boy who had an Israeli flag draped over his shoulder. The video appeared authentic.

Hussein al-Sheikh, a senior Palestinian official who serves as the main liaison between the Palestinian Authority and Israel, tweeted about the controversy earlier this week, saying that raising the flag would show “outrageous disregard” for Palestinian feelings and mark the “continuation of extremist racist campaigns.”

Hamas warned Wednesday that Israel was “playing with fire and dragging the region into an escalation for which the occupation bears full responsibility.”

Clashes in and around Al-Aqsa last year helped ignite an 11-day war between Israel and Hamas.

The compound is in the Old City, which houses major religious sites sacred to Jews, Christians and Muslims. The Old City is part of east Jerusalem, which Israel captured in the 1967 war along with the West Bank and Gaza. The Palestinians want all three territories to form their future state.

Israel annexed east Jerusalem in a move not recognized by most of the international community, and it considers the entire city its capital. The West Bank has been under Israeli military rule for nearly 55 years, and Gaza has been under an Israeli-Egyptian blockade since Hamas seized power from rival Palestinian forces in 2007. The Palestinian Authority administers parts of the West Bank and cooperates with Israel on security. It is barred from operating in east Jerusalem.