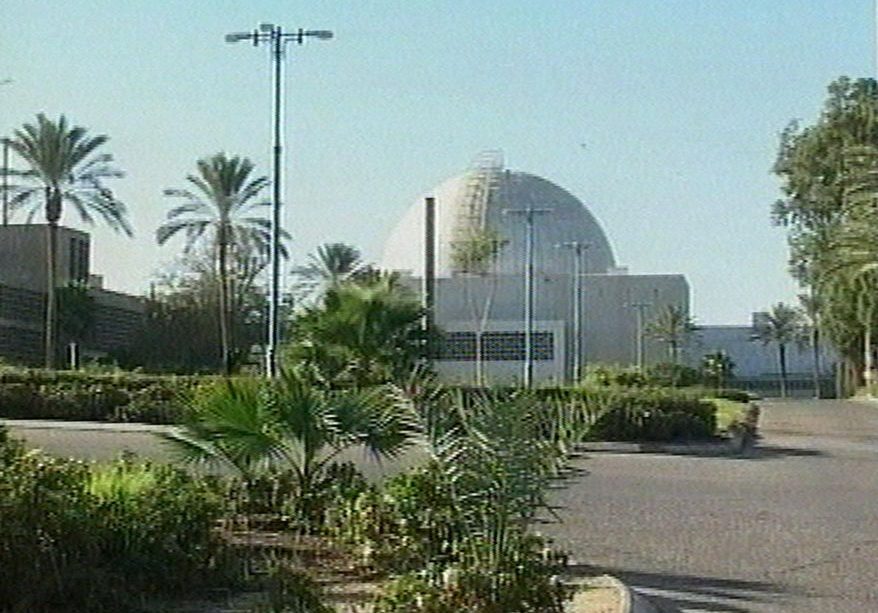 Israeli television station Channel 10, shows what the television station claims is Israel's top secret nuclear facility in the southern Israeli town of Dimona, the first detailed video of the site ever shown to the public. Friday, Jan. 7, 2005. AP/ FILE

A Syrian surface-to-air missile exploded in southern Israel on Thursday, the Israeli military said, in an incident that triggered warning sirens in an area near the secretive Dimona nuclear reactor.

There were no immediate reports of any injuries or damage in Israel.

The military said that in response to the launch, it attacked several missile batteries in Syria, including the one that fired the projectile that struck its territory.

“Air defences intercepted the rockets and downed most of them,” the agency said.

However, four soldiers were injured in the attack and some material damage took place, it said.

A Syrian military defector said the Israeli strikes targeted locations near the town of Dumair, some 40 km northeast of Damascus, where Iranian-backed militias have a presence. It is an area that Israel has hit repeatedly in past attacks

An Israeli military spokesman said the Syrian missile had been fired at Israeli aircraft during an earlier strike and had overflown its target and reached the Dimona area.

The errant Syrian missile was an SA-5, one of several fired at Israeli air force planes, according to the spokesman. It did not hit the reactor, landing some 30km (19 miles) away, he added.

A Reuters reporter about 90 km (56 miles) north of Dimona heard the sound of an explosion minutes before the military tweeted that sirens had gone off in the region.

Israeli media have said for weeks that air defences around the Dimona reactor and the Red Sea port Eilat were being beefed up in anticipation of a possible long-range missile or drone attack by Iranian-backed forces – perhaps from as far away as Yemen.

Tensions are high between Israel and Iran over Tehran’s nuclear programme and a recent surge in sabotage attacks, some of which the arch-foes have blamed on each other.

Taiwan begins to plan for zero emissions by 2050