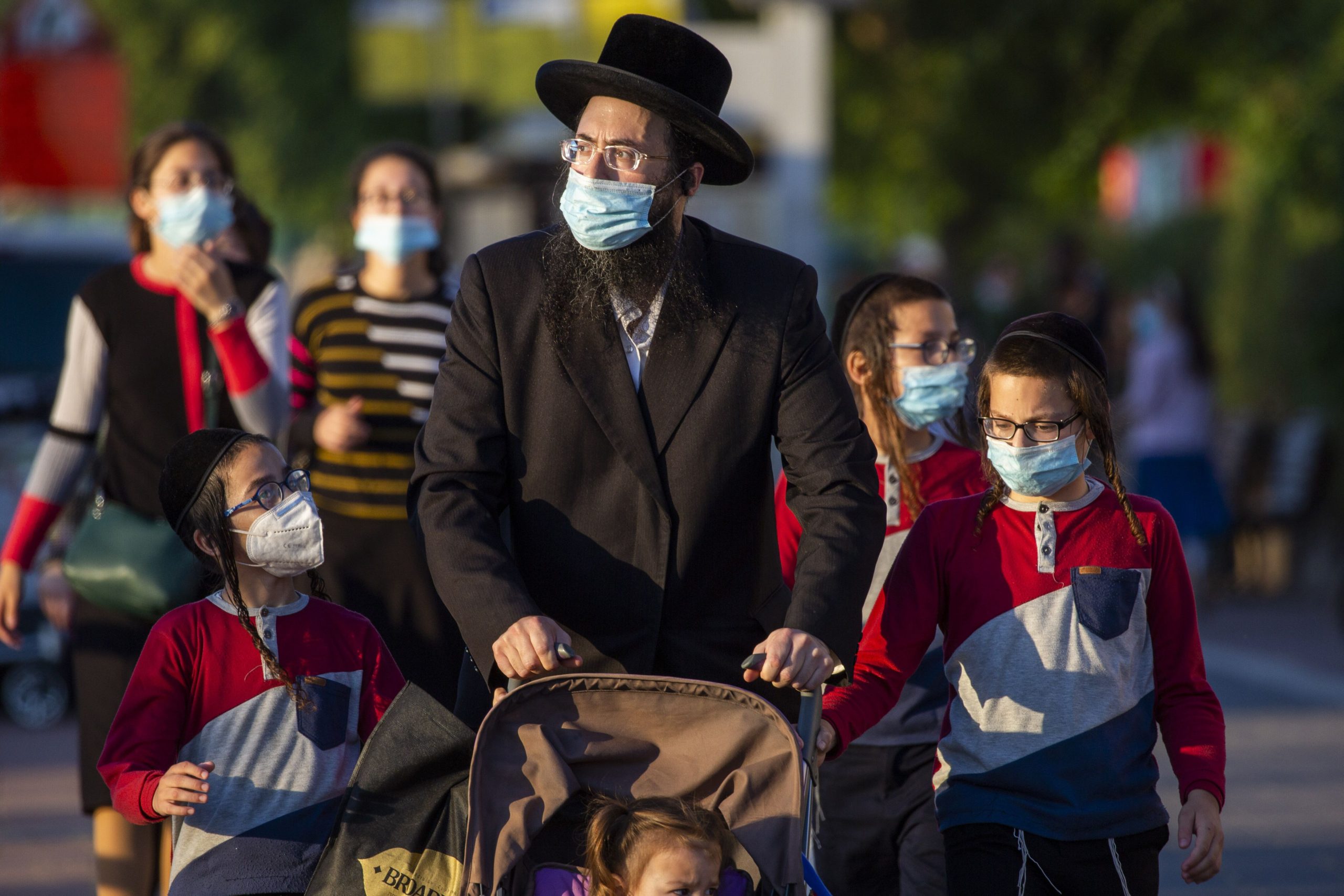 Ultra-Orthodox Jews wait to cross a closed road to go to their homes as they wear protective face masks to help curb the spread of the coronavirus in Ashdod, Israel, Thursday, July 2, 2020. AP

Israel ordered thousands of people into quarantine after a contentious phone surveillance program resumed as Palestinians in the West Bank returned to life under lockdown after both areas saw surges in coronavirus cases.

A statement Sunday from Israel’s Health Ministry said “many” messages had been sent to Israelis following the renewed involvement of the Shin Bet domestic security agency. The Israeli daily Haaretz reported that more than 30,000 people were notified they must enter quarantine since Thursday.

After imposing strict measures early on during a first wave of infections, Israel and the Palestinian territories appeared to have contained their outbreaks, with each reporting only a few dozen new cases a day in May. But an easing of restrictions led to a steady uptick in cases over the past month.

“We are at the height of a new corona offensive. This is a very strong outbreak that is growing and spreading in the world and also here,” Israeli Prime Minister Benjamin Netanyahu said at a meeting of his Cabinet Sunday.

“We are in a state of emergency,” he said, adding that Israel would need to further clamp down to rein in the virus.

Israel is now reporting around 1,000 new cases a day, higher than its peak during the previous wave and it is set to reimpose restrictions in response, limiting occupancy in bars, places of worship and event spaces to 50 people. It is requiring citizens wear masks and has urged more stringent social distancing.

With its contact tracing apparatus struggling to keep up with the mounting caseload, Israel last week redeployed the Shin Bet to use its sophisticated phone surveillance technology to track Israelis who have come in contact with infected people and then notify them that they must enter home quarantine. The measure is typically used to thwart attacks by tracking Palestinian militants.

The contentious tactic was used when the outbreak first emerged earlier this year, and when civil rights groups challenged it in the country’s Supreme Court, the court threatened to halt its use unless it was put under legislative oversight. The Israeli Knesset has since done so twice using temporary legislation, most recently on Wednesday.

While officials have defended the practice as a life-saving measure, civil rights groups attacked it as an assault on privacy rights. Analysts say the measure may act as a dragnet that could needlessly force some into quarantine.

Israeli media reported that of the thousands ordered into home quarantine, many Israelis complained that they struggled to appeal quarantine orders because the Health Ministry’s hotline was overwhelmed and ill-equipped to handle such a deluge.

Israel appeared to have put the pandemic behind it in May, with Israeli Prime Minister Benjamin Netanyahu proudly urging Israelis to go out, grab a coffee or a beer and “have fun.” Critics have charged that amid the dwindling cases, Israel let down its guard, reopened too quickly and failed to capitalize on its gained time to improve its contact tracing capabilities to contend with a second wave.

Netanyahu, who was largely seen as having capably handled the first wave, has suffered in public opinion polls from his approach this time around.

In the West Bank, residents have been ordered since Friday to remain at home unless they need to purchase food or medicine. Movement between cities and towns is heavily restricted. The lock down is expected to last five days.

On Sunday, Palestinian President Mahmoud Abbas extended a state of emergency in the territory for 30 days, a measure that allows officials to impose additional virus restrictions, including extending lock downs, banning movement between cities and deploying security forces.

Palestinian authorities fear that if the outbreak spirals out of control it could overwhelm its under-resourced health care system.

In the past two weeks, Palestinian health authorities have reported more than 1,700 confirmed coronavirus cases in the West Bank city of Hebron and hundreds more in Bethlehem and Nablus.

The West Bank has reported more than 3,700 cases since the outbreak began. More than 400 have died.