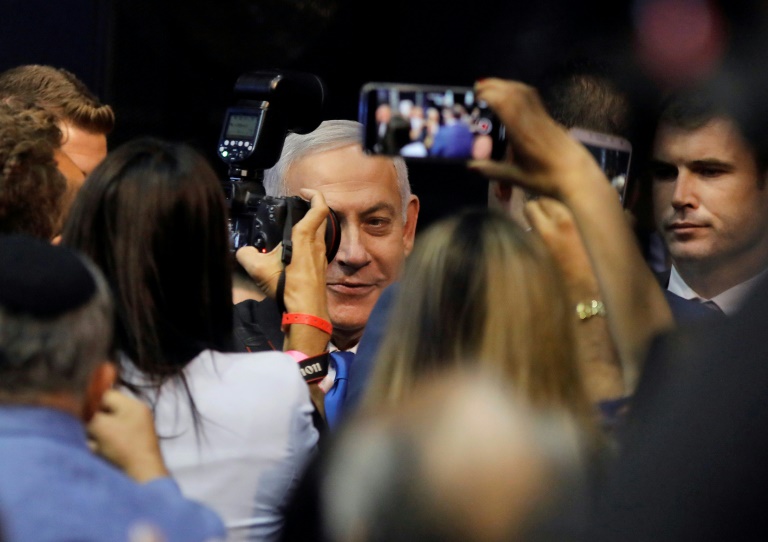 Israeli Prime Minister Benjamin Netanyahu and his main challenger Benny Gantz awaited results from the country\’s general election on Wednesday after exit polls showed them locked in a tight race, leaving the country in suspense.
With a hoarse voice and appearing haggard after days of intense campaigning, Netanyahu appeared before supporters in the early hours of Wednesday and said he was prepared for negotiations to form a “strong Zionist government.”
He seemed to hint at openness to forming a national unity government, but did not specifically say so.
“In the coming days, we will enter into negotiations to establish a strong Zionist government and to prevent a dangerous anti-Zionist government,” he told supporters at a post-election rally in Tel Aviv.
The “anti-Zionist” reference was directed at Israel\’s Arab parties, with exit polls showing they could become the third-largest force in parliament.
Those parties, running under the Joint List alliance, have said they may potentially back Gantz for premier, which could block Netanyahu from receiving the chance to form a government.
In his speech to supporters in Tel Aviv, Gantz called for a “broad unity government” but cautioned that he too was waiting for final results.
“We will act to form a broad unity government that will express the will of the people,” he said.
“We will begin negotiations and I will speak with everyone.”
Three separate exit polls showed Netanyahu\’s right-wing Likud and Gantz\’s centrist Blue and White alliance with between 30 and 32 parliament seats each out of 120.
Fears of election fatigue did not materialise, with turnout at 69.4 percent, higher than in April polls.
Ex-defence minister Avigdor Lieberman\’s nationalist Yisrael Beitenu party, which could play a kingmaker role, could win between eight and nine seats, according to the polls.
If the polls are reasonably accurate — and they have in the past been off base — either Netanyahu or Gantz will face tough negotiations to form a government.
After the exit polls were released, Lieberman called for a unity government with his party, Likud and Blue and White as he addressed supporters, saying the country was facing an “emergency”.
“There is only one option for us,” he said, adding the unity government should exclude the country\’s ultra-Orthodox religious parties, which he accuses of having undue influence on politics.
– Immunity? –
The stakes could not be much higher for the 69-year-old Netanyahu, Israel\’s longest-serving prime minister but who is facing possible corruption charges in the weeks ahead.
He spent election day warning he was on the verge of losing if his supporters did not turn out to vote, including in appearances at Jerusalem\’s main market and its central bus station, wielding a megaphone to exhort the crowds.
He repeatedly warned, as he has in previous elections, that left-wing and Arab voters were showing up in large numbers to vote him out, appearing on Facebook live to do so.
Gantz voted in his hometown of Rosh Haayin near Tel Aviv and called on the country to reject corruption and “extremism”.
Later he visited a shopping mall in the northern city of Haifa and addressed the public through a megaphone on the beach in Tel Aviv.
Netanyahu, prime minister for a total of more than 13 years, suffered one of the biggest defeats of his political career following an election in April.
His Likud along with its right-wing and religious allies won a majority, leading President Reuven Rivlin to task him with forming a government.
But following weeks of discussions, Netanyahu failed, opting for an unprecedented second election rather than risk Rivlin choosing someone else.
Many believe that if he wins, Netanyahu could seek to have parliament grant him immunity from prosecution ahead of a possible corruption indictment in the weeks ahead.
He spent the final days of the campaign seeking to appeal to right-wing nationalists — key to his re-election bid — and to boost turnout among his base.
Those efforts included a controversial pledge to annex the Jordan Valley, a third of the occupied West Bank.
He issued unfounded warnings that the vote could be stolen by fraud in Arab communities, leading critics to accuse him of racism.
But Netanyahu has also highlighted the country\’s growing economy and his relationships with world leaders such as US President Donald Trump.
– \’Normal again\’ –
Gantz has presented himself and his alliance, which includes three former military chiefs of staff, as an honourable alternative.
He repeatedly spoke of Netanyahu\’s willingness to form a coalition with far-right parties that could help him secure immunity.
A campaign by Lieberman\’s nationalist Yisrael Beitenu to “make Israel normal again” appeared to have resonated with voters.
The staunch secularist has long campaigned against what he sees as the undue clout of ultra-Orthodox Jewish parties, which he accuses of seeking to impose Jewish religious law on Israel\’s secular population.
Lieberman has demanded legislation to make military service mandatory for the ultra-Orthodox as for other Jewish Israelis — a demand he refused to drop after April polls, eventually blocking Netanyahu\’s efforts to form a coalition.
SOURCE: AFP
Previous Article