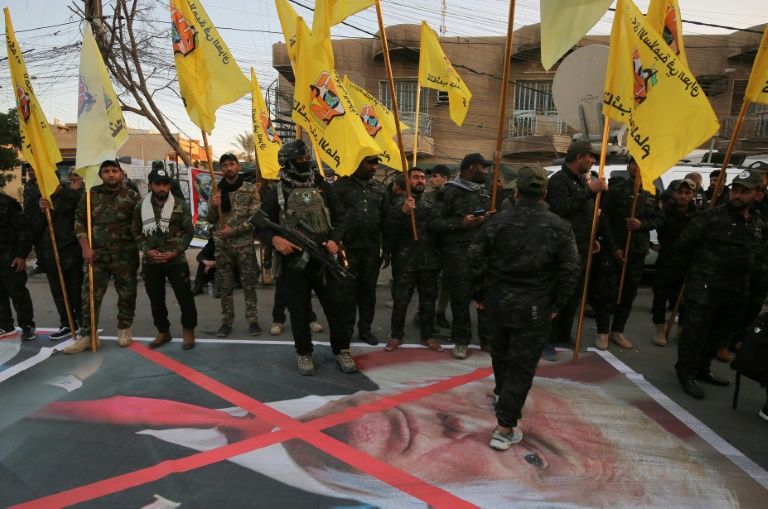 Iraqi armed factions called on Tuesday for an urgent meeting to face “the war against the resistance,” after a US strike on Baghdad last week killed top Iranian and Iraqi commanders.

“We will regroup the forces of the resistance in a single entity to respond to Washington,” said Nasr al-Shammary, deputy head of the Harakat al-Nujaba group.

Nujaba, backed by Iran and fiercely opposed to the United States, is one of the most hardline factions of Iraq’s Hashed al-Shaabi military network, which has been incorporated into the state.

Soleimani was known as the “godfather” of Iran’s allies abroad, who broadly identify as the “resistance axis”.

“The American aggression against the Hashed al-Shaabi has marked the beginning of the war against the resistance,” Shammary said in his statement.

The statement did not identify the factions invited but it was expected the Hashed’s pro-Iran factions and forces loyal to cleric Moqtada Sadr would attend.

Sadr has reactivated his notorious Mahdi Army, the militia that fought US troops after their 2003 invasion, calling for the formation of “international resistance regiments.”

Qais al-Khazali, a paramilitary leader and bitter rival of Sadr’s, echoed his call and threatened the US that his forces would “turn the skies above you into hell.”

In his statement, Shammary said the “resistance” would respond across the region, and said his group was already in touch with Iran-backed Lebanese movement Hezbollah.

“We will wage a war against the American presence in all parts of the region that we can reach,” he said, describing the US embassy in Baghdad as a “den of spies”.

“Thousands of Marines are present in possible targets,” he said.

Iran has already vowed “vengeance” for Soleimani, who was mourned by unprecedented crowds across the country Monday.

On Tuesday, thousands of Iraqis also accompanied a funeral procession that brought Muhandis’s remains to his native Basra, an oil-rich southern city, chanting “Death to America!”

The Hashed said his remains had been briefly taken to Iran for DNA testing to separate them from those of Soleimani as the US drone strike had dismembered their bodies.

Like other Shiite Muslims, Muhandis would ultimately be buried in the Iraqi shrine city of Najaf in what is known as the largest cemetery in the world.

The Pentagon admitted on Monday that a top US general had mistakenly informed the Iraqi government that his troops were preparing to withdraw.