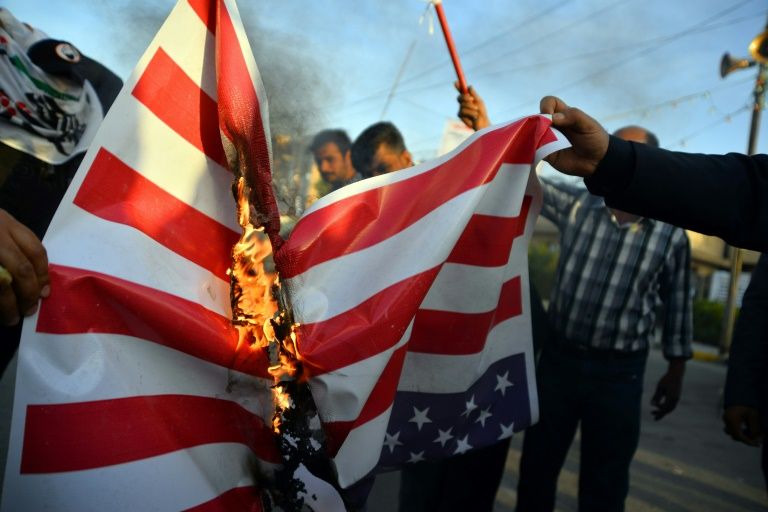 Iraq’s government warned Monday that its relations with the United States were at risk after deadly American air strikes against a pro-Iran group sparked anger on the streets, with protesters torching US flags.

At least 25 fighters were killed in Sunday night’s attacks, which saw US planes hit several bases belonging to the Hezbollah Brigades, one of the most radical factions of Hashed al-Shaabi, a Tehran-backed Iraqi paramilitary coalition.

The attacks came as Iraq is caught up in mounting tensions between its allies Tehran and Washington while it also grapples with huge street protests against corruption and Iran’s growing political influence in the country.

The strikes “killed 25 and wounded 51, including commanders and fighters, and the toll could yet rise,” said the Hashed, which holds major sway in Iraq.

Victims were still being pulled from the rubble of bases near Al-Qaim, an Iraqi district bordering Syria, on Monday, it said.

The Hezbollah Brigades said they will hold a mass funeral ceremony on Tuesday in Baghdad near the high-security Green Zone, where the US embassy is located.

Iraq’s government, acting in a caretaker capacity following the resignation of prime minister Adel Abdel Mahdi in the face of street protests, denounced the strikes and warned they could affect ties with Washington.

“American forces acted on their political priorities, not those of the Iraqis,” a statement said, adding that such strikes “violate the sovereignty of Iraq”.

The attacks “force Iraq to review its relations and its security, political and legal framework to protect its sovereignty”, the government added.

The warning came as demonstrators torched US flags in the Shiite-dominated southern cities of Basra and Najaf as well as in Kirkuk, north of Baghdad, while lawmakers called for US troops to be booted out of Iraq.

Outgoing premier Abdel Mahdi said it is up to parliament to determine the next move, according to a video released by his office.

“We will see what parliament will decide. We are only a caretaker government,” he said.

– Caught in the middle –

Parliament’s deputy speaker, part of influential Shiite cleric Moqtada Sadr’s bloc, called on the Iraqi state to “take all necessary measures” in the face of the US attacks.

Dozens of lawmakers called on the government to review an agreement allowing the deployment of 5,200 US soldiers in the country, saying the strikes amount to a violation that renders the pact obsolete.

US Assistant Secretary of State David Schenker said the strikes were a message to Iran after months of “restraint” by the administration of President Donald Trump.

Schenker said the strikes were a “proportionate” response for the death Friday of a US civilian contractor in Kirkuk in a Hezbollah Brigades rocket attack.

“We thought it important to hit a significant target set to send a very clear message to them about how serious we take American lives,” Schenker told reporters.

“We don’t want an escalation here, we want a de-escalation,” he added however.

Abdel Mahdi said he had been forewarned by US Defence Secretary Mark Esper that the US would carry out the attacks.

“He told me the United States would strike the Hezbollah Brigades and I told him it would be a very dangerous act that could lead to an escalation,” Abdel Mahdi said.

Iraqi leaders fear their country could become a battleground between Tehran and Washington.

The office of Grand Ayatollah Ali Sistani, who is highly revered by Iraq’s Shiite majority, denounced the attacks.

“The authorities must prevent Iraq being used as a place for the settling of accounts,” it said in reference to US-Iran tensions.

Sunday night’s strikes revived calls from Iraq and beyond for US troops to leave.

The Hezbollah Brigades demanded the “withdrawal of the American enemy”, a call echoed by the pro-Iran groups Badr and Assaib Ahl al-Haq — whose leaders were recently hit with US sanctions.

“The American military presence has become a burden for the Iraqi state and a source of threat against our forces. It is therefore imperative for all of us to do everything to expel them by all legitimate means,” the Assaib Ahl al-Haq said.

Iran’s foreign ministry spokesman Abbas Mousavi said the US had “shown its firm support for terrorism and its neglect for the independence and sovereignty of countries” by carrying out the attacks.

Russia called for restraint saying the “exchange of strikes” in Iraq were “unacceptable”.