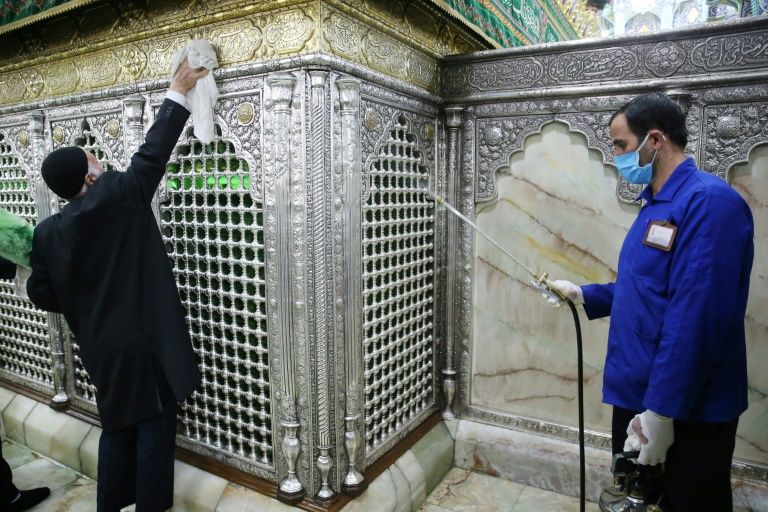 Iranian sanitary workers disinfect the revered Masumeh shrine in the Shiite holy city of Qom, which has been the epicentre of the COVID-19 outbreak in the Islamic republic (AFP Photo/MEHDI MARIZAD)

Iran said Tuesday its coronavirus outbreak, the deadliest outside China, had claimed 15 lives and infected nearly 100 others — including the country’s deputy health minister.

The Islamic republic’s neighbours have imposed travel restrictions and strict quarantine measures after reporting their first cases in recent days, mostly in people with links to Iran.

The United Arab Emirates was the latest to clamp down on Tuesday, halting all passenger and cargo flights to and from Iran, a similar move to other nearby countries including Armenia, Kuwait, Iraq and Turkey.

Iran has been scrambling to contain COVID-19 since Wednesday last week when it announced the first two deaths in Qom, a centre for Islamic studies and pilgrims that attracts scholars from abroad.

The country’s deputy health minister put on a brave face as he admitted he too was infected.

Iraj Harirchi had coughed occasionally and wiped sweat from his brow repeatedly during a news conference in Tehran on Monday with government spokesman Ali Rabiei.

At the time he denied a lawmaker’s claim that 50 people had died from the virus in the Shiite shrine city of Qom, saying he would resign if the number proved to be true.

“I too have been infected with coronavirus,” Harirchi said on Tuesday in a video apparently shot by himself.

“I wanted to tell you that… we will definitely be victorious against this virus in the next few weeks,” the official declared.

But he warned Iranians to be careful as the “virus does not discriminate” and could infect anyone.

Outspoken reformist MP Mahmoud Sadeghi also confirmed in a tweet he had tested positive for the virus, adding that he did not “have much hope of staying alive”.

Two of the deaths were of elderly women in Markazi province, and the other was a patient in Alborz province, state news agency IRNA said.

According to the health ministry, most of the deaths and infections outside Qom are among people who have recently visited the holy city.

Its spokesman Kianoush Jahanpour said 16 of the new cases were confirmed in Qom, while nine were in Tehran, and two each in Alborz, Gilan and Mazandaran.

The virus appeared to be spreading to new parts of Iran, as one new case was also reported in each of the provinces of Fars and Khorasan Razavi, as well as Qeshm island.

Despite being Iran’s epicentre of the outbreak, Qom has yet to be quarantined.

However, religious events have been put on hold at its main hotspot, the Masumeh shrine revered by Shiite Muslims, while teams were deployed to disinfect it.

Photos published by local news agencies showed masked men in blue uniforms spraying disinfectant on walls and objects inside the shrine, while unprotected worshippers prayed and kissed the ornate structure enclosing a tomb.

In other provinces including Tehran, teams have been disinfecting underground train carriages and municipal buses at night, according to reports.

The sight of Iranians wearing masks and gloves is now common in much of the country.

Sales of masks, disinfectant gels and disposable gloves have soared, with officials vowing to prevent hoarding and shortages by boosting production.

President Hassan Rouhani expressed confidence the authorities were on the right track.

“The reports I have received from the health minister are promising. We are moving towards controlling the virus,” he said.

The United States, however, expressed concern that Iran may have “suppressed vital details” about the outbreak.

“All nations including Iran should tell the truth about the coronavirus and cooperate with international aid organisations,” said US Secretary of State Mike Pompeo.

Iran, which has shut schools, universities and cultural centres until the end of the week, has yet to find the source of the country’s outbreak.

But the health minister, Saeed Namaki, has said that one person who died of coronavirus in Qom was a businessman who had made several trips to China.

A World Health Organization spokesman told AFP that a mission to Iran was “still being planned” but “it is not happening today”.

Tenerife hotel with 1,000 guests in lockdown after Italian tests positive for ...

Death toll rises to 20 from Delhi riots during Trump trip