Iran says 92 dead as virus reaches all but one province 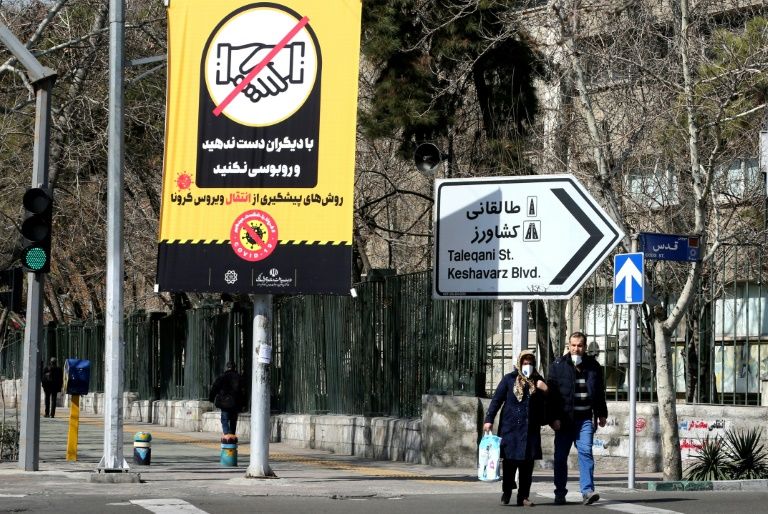 Coronavirus has killed 92 people in Iran, officials said Wednesday, as the world’s deadliest outbreak outside China spread to all but one of the country’s provinces.

Iran’s President Hassan Rouhani meanwhile dismissed a US offer to help it fight the novel coronavirus outbreak, charging that Washington hides behind a “mask of sympathy” while sanctions are depriving the country of medicine.

The Islamic republic reported 15 new deaths from COVID-19 and 586 additional cases, bringing the overall toll to 92 dead and 2,922 infected.

“This virus doesn’t have wings to fly. We’re the ones spreading it,” health ministry spokesman Kianoush Jahanpour, who gave the latest figures, told a televised news conference.-

“We have to cut down on unnecessary interactions. We have to be extra careful in the coming weeks,” he added, calling on the public to refrain from travelling and gathering at events such as weddings.

The provinces of Tehran and Qom were the worst-hit with 253 and 101 new cases of COVID-19 respectively, according to the spokesman.

The Shiite holy city of Qom, south of Tehran, is the epicentre of Iran’s coronavirus outbreak and where its first deaths were reported on February 19.

Authorities have since scrambled to halt its rapid spread.

Tehran’s streets were considerably quieter than usual on Wednesday, with few shops open.

Many people wore masks as they walked along streets hung with large posters on preventing infection.

Despite the preventive measures, the novel coronavirus is now present in all but one of Iran’s 31 provinces, according to the latest figures.

The provinces of Chaharmahal and Bakhtiari, North Khorasan and Zanjan were added to the list on Wednesday, leaving only Bushehr in the south unaffected.

US President Donald Trump said Saturday he was ready to aid Iran with the virus outbreak.

“If we can help the Iranians with this problem, we are certainly willing to do so… All they have to do is ask. We will have great professionals over there,” he said.

His counterpart in Tehran dismissed the offer, saying “our people know well that you are lying” with American sanctions still in place that block Iran’s access to medicine.

“Those who have deprived the people of even medicine and food through sanctions, who have done the most vicious things… they appear with a mask of sympathy and say that we want to help the nation of Iran,” Rouhani said, in a clear reference to the United States.

Washington pulled out of a landmark nuclear deal and reimposed crippling sanctions on Tehran in 2018.

But international purchases of such supplies are forestalled by banks wary of conducting business with Iran for fear of falling foul of the US sanctions.

Rouhani said the US must lift sanctions blocking medicine purchases to prove its honest intent to help.

The novel coronavirus has so far infected some high-profile Iranian officials.

The national emergency services chief Pirhossein Kolivand was the latest such infection announced on Tuesday.

It came a day after the virus claimed the life of Mohammad Mirmohammadi, a member of the Expediency Council which advises Iran’s supreme leader Ayatollah Ali Khamenei.

WHO warns of mask shortages as virus cases rise worldwide